PAPER TIGERS: Influenced By a Zombie, Saved By Origami, Fights By Opera 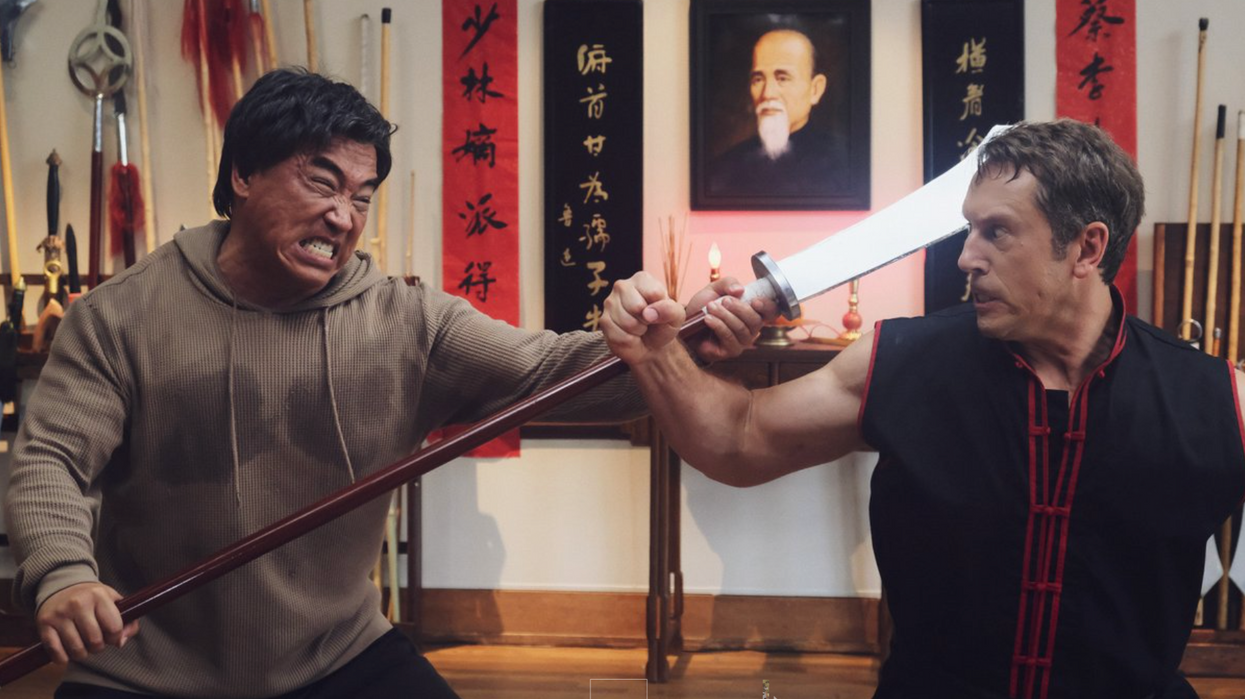 In the braniac comedy Paper Tigers, judging from this article's title, the film is more NSYNC than the prancing twisted version of their hit song By By By. Action films plagiarize each other by writing wall-to-wall action, a roller coaster ride, high-octane action and kick-ass fights. Like Bruce Lee says, "If you make an ass of yourself, there'll always be someone to ride you." Then there's Paper Tigers, who with jocular composition and wisecrack exposition, has quasi-wall-to-quasi-wall action (no limitation as limitation), a high-decane (that's higher than octane) backwards roller coaster ride with kick-whole body fights. And don't forget the zombie, origami and opera.

I've seen 15,000+ martial arts movies, which is a lot of plot repetition. Written by Vietnamese American Bao Tran, though Paper Tigers appears to be a revenge-for-killing-my-master motivated movie, it's a superbly well crafted relationship ridden and character driven film that has the humor not of Jackie Chan, but of three Emmy award sitcoms, All in the Family, Cheers and Friends.

Chinese tradition asserts three is a lucky number. Shot in Seattle, so named by Western settlers after the Suquamish and Duwamish Native American Chief, Si'ahl (anglicized as Seattle) in 1853, and the final resting place of the Little Dragon Lee, whose spirit sowed the city with martial veracity in 1973, it was around that time when the Three Tigers of Seattle were born. Yet when the cocky teens abandoned their sifu's virtuous approach to kung fu, their brotherhood dissolved and they went their separate ways.

Fast-forward to midlife crisis reckless abandonment and after an unknown evil force coldly slays their sifu, bum kneed Hing (Ron Yuan), marriage on the rocks Danny 8-Hands (Alain Uy) and bad blood feeling Jim (Mykel Shannon Jenkins) unite to solve the mystery of their sifu's killer. Yet over time, they've lost their metal and replaced it with paper and as the saying goes, their roars have become much more than their bites. To make matters worse, their childhood nemesis Carter (Matthew Page) has found his metal and bite and wants to shame the Tigers and use their paper namesake to write them off.

According to Tran, his film's vision was influenced by the zombie comedy, Shaun of the Dead (2004) noting that the intention was to do for kung fu movies what Shaun did for zombie films; something fresh, for love of the genre, and be like zombie Shaun who goes through life with emotions, relationships and friends. The idea is that audiences wont know what will happen yet they'll feel like something is changing. As it were, Shaun and Danny 8-Hands subliminally share another attribute, something about ate-hands.

Old and out of shape, the key for the three is to reunite and realize that reconnecting with each other and embracing their original martial values will welcome them back to the fold stronger than ever. Metaphorically speaking, using the origami principle to take their unraveled single slivers of light weight paper and fold, fold and fold them into solid, sculptured tiger-shaped pieces of art that has suitable tensile strength confusion. It's also race to overcome pulled leg muscles, lost muscle memory and for Danny 8-Hands to relearn the secret technique he vaguely remembers and never mastered.

Part of the film's charm is recognizing the nods to Lee, many old classic Chinese kung fu films like Brave Archer (1977), My Young Auntie (1981) and Martial Club (1981) and American martial arts movies such as Karate Kid (1984). Yet certain elements of the fights, the choreography and camera choreography were distinctly familiar looking to me. When Bao told me that his action mentor was Corey Yuen, it made perfect sense.

When I was a fight directing apprentice for Yuen Tak on Sammo Hung's Martial Law, for every fight on-camera shot, I drew on paper each camera position (also noting what the steadycam operator did), camera speed and lens size as well as the fight set ups.

It's no wonder that the three main fights in Paper Tigers, against three anti-Tiger punks in an empty pool, the white-Asian wannabe Carter, and the mysterious assassin (Ken Quitugua) are well choreographed with snappy paced rhythm and clear visuals, beautifully shot and each duel looks and feels different from the others. Action director Quitugua and the band of stunt brothers Martial Club, brilliantly gave these visuals life. Since the heroes are old and have rusty movements, the fights are more believable as the choreography subtly has characters forgetting their skills and getting paid with pain when their timing is off, which maybe were real mistakes left in on purpose. Ouch man!

Speaking of ouch man! When the script made its Hollywood rounds, funding offers came with one stipulation, change the lead to a white guy. Apparently Asian leads still didn't matter. That's as nuts as Bruce Lee's Warrior idea being rejected by Warner Brothers and Lee denied the role of Caine in Kung Fu (1971) because he was Chinese. Yet not as demented as when Guy Aoki told me that back in the day, he was a lead contender to play the role of Sammy Lee, a five-foot tall, Korean American, Olympic gold medallist diver and lost out to the six-foot tall, white actor Robert Young (star of Marcus Welby, MD). Talk about being crazier than sending your horse to audition for The Godfather (1972). Yet at the end of the day, the filmmakers can boldly and proudly paraphrase Frank Sinatra's famous song, "We did it our way." Respect, brotherhood and Right On!