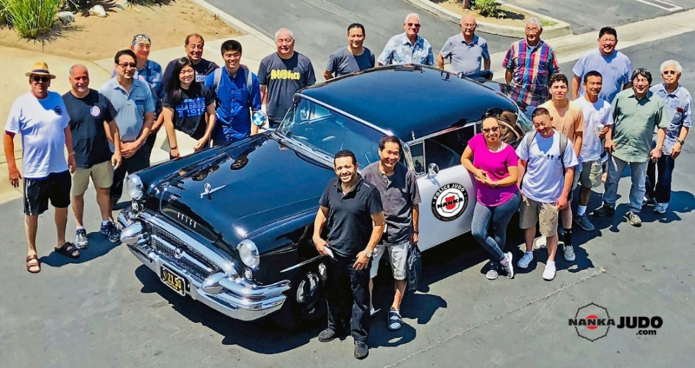 Following the George Floyd tragedy last year upon viewing the video from the perspective of a seasoned judoka, it was obvious that Derek Chauvin had his knee place perfectly on Floyd's carotid artery. I knew instinctively that holding that position for a prolonged length of time would cause certain death. I thought to myself how all police need to be judo black belts just like in Japan. As judo is the perfect martial art for the police work from both a technical as well as philosophical perspective.

For over a decade back in the late 1990's I served as a Defensive Tactics Consultant for the Los Angeles Police Department (LAPD). That group in addition to many outstanding martial artists, included a lawyer and a physician to carefully review the techniques being taught to their officers.

Based on this experience I recommended that Nanka (the SoCal Judo consortium) form a Police Judo Committee. Improving our society with judo was Kano's mission. This is at the core of our group chaired by Robert Draper.

Why Police Judo? By Jess Duran

We're sure most people reading this have observed different martial arts classes before. I know I have and I'm a fan of them all. I love the precision and focus of karate, the high flying kicks of taekwondo, the methodical groundwork of BJJ and the many styles of kung fu. I'm a fan of them all, but I found my way through judo. Anyone can walk into a judo class and find practitioners of all ages learning to gain control of an uncooperative opponent while standing and attempt to take them to the ground where they can subdue their opponent with one of many holds or pins. Judo really does stand alone in its ability to manipulate an opponent while standing and take them to the ground in a controlled manner. Other styles practice similar techniques, but just as I cannot deny BJJ's technical brilliance while grappling on the ground, judo's superiority in relation to throws, sweeps and holds cannot be disputed.

I have been a peace officer for over twenty years. I have experienced a lot and have been involved in and successfully avoided many use of force encounters. Judo has helped me get through them all. The techniques have proven highly effective in overcoming the resistance of a combative subject and aided me with bringing violent and potentially dangerous encounters to a quick end. Judo has never failed me. It is more than just the techniques that have aided me. One of judo's strong points is its focus on randori live open practice.

Most judo classes end with two practitioners giving their all to take their opponent to the ground with a big throw or beautiful sweep. Nothing is held back. Judoka learn to become calm and efficient during a fight before exploding into a well-timed technique. Once it's all over, the two combatants bow or shake hands with genuine respect for each other. These experiences on the mat have also helped me avoid encounters. The physical and mental conditions one experiences while doing judo are similar to what an officer will experience during high stress encounters. The ability to perform calmly during stressful encounters will aid in rational decision making processes and may, in some instances, help an officer resolve a volatile situation without using force.

In service to others...The way of judo

As law enforcement officers, we are in service to our community. We protect, build relationships and dedicate our lives to the service of others. To all people, regardless of their opinion of us or our profession. We remain humble and do what is right, without expectation of thanks or reward. We take pride in our ability to do this, to be guardians of all.

Judo practitioners share this goal of a common service to the people of their community. A judoka bows before entering and exiting the practice area. They bow to their opponent before and after a match, win or lose. Judoka should not brag or boast following a victory and must contain their emotion after a painful loss. Judoka are taught to respect all people. This is the way of judo.

Judo clubs are commonly found in community centers or other non-profit organizations that are run by instructors with full time jobs who sacrifice their personal and family time to share what has been shared with them. They commit themselves to anyone who steps onto their mat. They do it because it is the way of judo.

Judo is practiced all over the world by people of all ages, young and old and of all physical abilities. It is an Olympic and Paralympic sport. It is for everyone. The curriculum established by the Nanka Police Judo Committee (NPJC) consists of basic foundation techniques that are both effective and capable of being performed by all. The techniques can be used in combination with one another and allow an officer to maintain control of a subject throughout an entire use of force encounter.

An officer will learn to control a subject while standing, take the subject to the ground and safely restrain the subject. This is what judo was created to do. It is what judo specializes in. I look forward to seeing my law enforcement brothers and sisters on the mat and I welcome your families to share in your journey at your local judo club. Remain vigilant and stay safe!

Police Judo combines techniques of throwing, ground control and striking techniques that produce high yield, low-risk techniques for control options as well as self-defense. The program is also designed for those who do not have a martial arts background.

In today's environment law enforcement is under constant scrutiny of their Use of Force techniques. Police Judo provides a low-key, effective means of taking people into custody. The Police Judo 1-2 day seminar program is not a "quick-fix" to Use of Force insufficiency, but it is a start.

Nanka Judo's Police Judo program has been developed by judo black belt ranked police officers and Use of Force instructors along with high ranking judo advisors whose ranks are 7th dan and above. Other benefits of being involved in a judo program are enhanced fitness, arrest and control development, confidence, and reduced Use of Force complaints.

Come join us for the free introduction to Police Judo Course. The program was recently developed by law enforcement professionals throughout the U.S., Canada and Japan.

The course is intended to introduce law enforcement officers to the program, which utilizes judo techniques for arrest and control of a subject. A brief history will be discussed before moving on to instruction and physical application.

Students are encouraged to dress comfortably. Bare feet or wrestling shoes will be worn on the mat. To ensure care of practice equipment, no other shoes or clothing containing any type of hard or sharp objects will be allowed. The program was designed for officers with no martial arts experience.