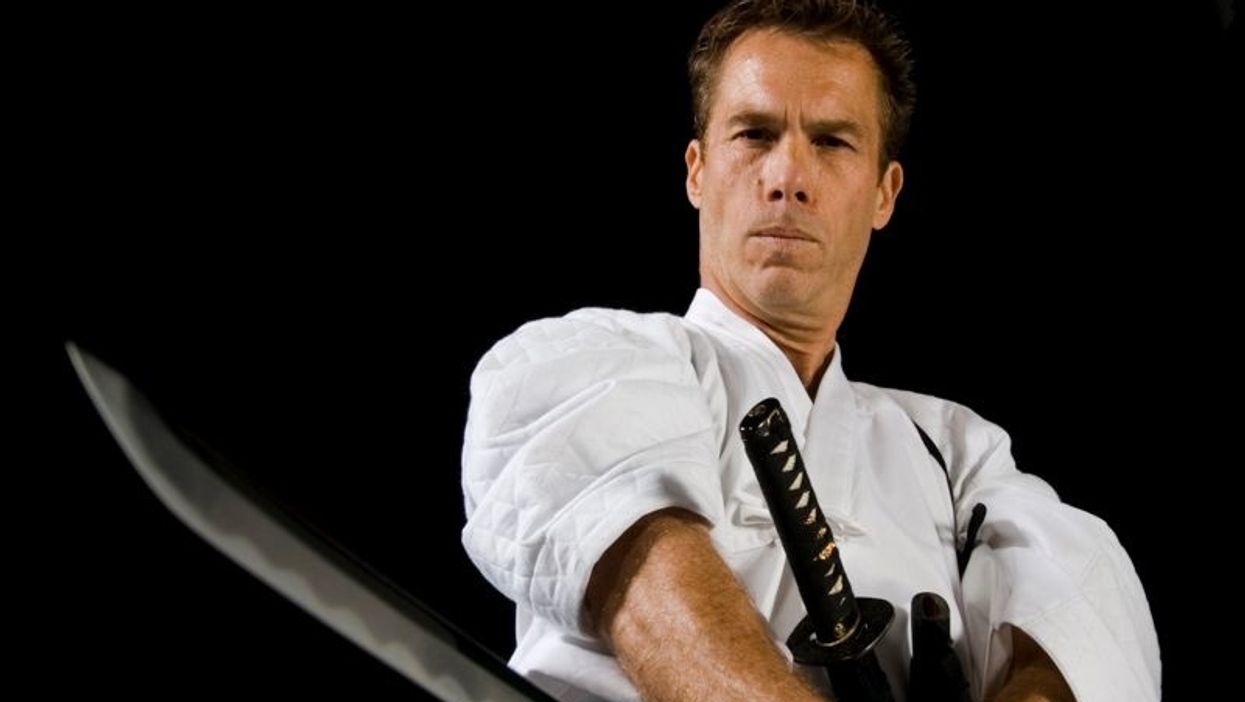 This is the first edition of an epic five-part series that details the beginning of world-renowned swordsman Dana Abbott's training.

My first memory of Japan was standing in front of the Budokan. It's a fairly brisk spring morning and I can see my breath as it mixes with the crisp Tokyo air. But there I was…absorbing all these new sights and sounds. Their history and culture were now within my reach as I pressed my hand on the entry door. I hear a voice saying sumimasen (excuse me) to which I turn around and see my master for the first time. I respond saying I just moved to Japan and am here to study the way of the sword and learn your culture! He looks at me with a puzzled face as he did not speak English, nor did I speak Japanese. I try again blurting out another English sentence with his same response. At that point I look him in the eye and say...kendo.

Kendo desu ka he asks? I nod and thus began my first steps on the path to perfection and the way of the sword. My future master, Abe Shinobu sensei, leads me to a room and motions for me to take off my shoes and sit on the floor covered with tatami mats. He leaves and after a few moments the door reopens admitting a young woman holding a tray of tea. She proceeds to set three cups down while Abe sensei and one of his students come in, sit down and bow. I join them and as we sip tea the student nervously tries to converse in his "pidgin English" as we familiarized ourselves with each other.

Looking back now I realize that just by dumb luck I entered the wrong end of the building as Abe Shinobu sensei was outside for a smoke. I don't recall what was said over tea, but with a dictionary in my hand and friendly conversation I was invited to visit his school. He then gave me his business card and said, "from station...take taxi". Its meaning being give this card to the taxi driver when you get to Sakura Shimachi train station.

Not wanting to wait even a day, as he might forget me, the next morning I immediately go to the train station and jump into a taxi. I hand the driver the card and say, onegai shimasu and we are off on my new adventure. It takes only about ten minutes to arrive, look around and find that I am inside the gates of a university.

I look around and find an office, which looks like admissions, enter and hand them the card. The person, whom I presume is the administrator, points to a chair and in his best English says, "sit prease". Within a few moments someone comes and takes me to Abe sensei's office. I later found out I was really fortunate to encounter him due an unusual twist of fate. Little did I know that just the day before I was talking to this Ojii san (older gentleman) about wanting to learn kendo. To my surprise, he just happened to be the headmaster of kendo from 1955 to 1985 at Nihon Taiiku Daigaku one of Japan's strongest kendo schools.

As I am led toward the building, I begin to hear screams and shouts accompanied by the cadence beat of a drum and the crack of shinai (bamboo swords) striking together. I continue to walk up the stairs on my way to Abe sensei's office which is on the third floor. Screams and pounding of feet grow louder as I pass the main door. My eyes reveal a vast room with a wooden floor that could easily accommodate a few hundred people. I continue to follow the aide up the second flight of stairs to a smaller room, which appeared to be a glass encased viewing room. From this room the instructors had a panoramic view of all the student's action happening on the second floor.

The aide motioned me to sit as he begins to serve me tea. Through these glass arena windows I could see nothing but a sea of blue clad kendoists with bamboo swords thrusting and parrying. I was absolutely awed observing the diligence and demeanor of all those blue clad practitioners. The strike of a drum stopped the training and what looked like chaos immediately became disciplined order. That's when I recognized Abe Sensei bowing to the class and moments later in the viewing room/teachers lounge sitting next to me with a cup of tea in his hand.

Soon another person came into the room approached me and said, "Hello my name is Shizawa Kunio and I hear you want to learn kendo"? It appears that Shizawa sensei spent a few months in Australia the year before and he was happy to have an opportunity to use his English, as he was quite proud of his conversational accomplishments.

In a seiza (kneeling position) he leans forward, picks up the dainty teacup and with massive forearms takes a sip, sighs and begins to ask me many questions. Questions like: Why do you want to practice kendo? Do I like sushi? What did I study at Arizona State University? How long did I plan to stay? What did your father do? As I look back now, I guess that was my interview to be admitted into Nihon Taiiku Daigaku where I began my real sword training.
From Your Site Articles