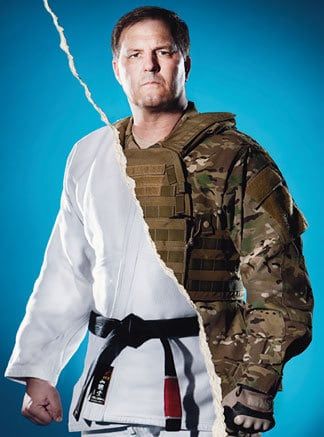 The man who brought CQC into the 21st century talks with Black Belt magazine about how MACP came to be and why it's the future of military combatives for troops on the ground.

Back in 1983, I heeded the call of Uncle Sam and joined the U.S. Army. Basic training at Fort Bliss, Texas, was easy enough and mostly fun, what with the M16 rifles, M60 machine guns, hand grenades, Claymore mines and LAWs (light anti-tank weapons). A martial artist interested in state-of-the-art weaponry couldn't ask for more. One thing I was disappointed about, however, was the hand-to-hand combat (H2HC) training — or the lack thereof. We spent a few hours with bayonets mounted on our M16s, running through slash-thrust-butt-stroke drills without a target, and that was it. Essentially, we did a bit of kata with no bunkai and definitely no kumite.Preparation for empty-hand combat was nonexistent. Fast-forward to 2003. The Army has radically changed its training philosophy, and recruits are required to cycle through the MACP, or Modern Army Combatives Program

MACP is composed of the most effective and versatile techniques from the Asian arts, as well as battlefield knife fighting and weapon-retention skills. The mechanics are seared into muscle memory during PT — the physical training that takes place every morning of every weekday — and it's all taught in a way that meshes with the Army culture and lifestyle. The result is a fighting force that's second to none in both armed and unarmed combat.

The man behind MACP is a 43-year-old warrior-scholar named Matt Larsen. To understand how Matt Larsen wound up being at the nexus when the Army's light bulb switched on, we need to rewind to 1984.

Just 17, Matt Larsen joined the Marine Corps and was sent to the Far East — first stop, Tokyo. “I thought if I spent two years there and didn't learn martial arts, it would be a wasted opportunity," he says. “So I trained in judo and shotokan karate. The karate was harsh, but the teacher was great. My next station was Okinawa — that was more like what you see in a karate movie."

Before departing, the future MACP creator did some research and determined that he wanted to train with Eizo Shimabukuro, the man who taught Joe Lewis. “I went to his house, and he sent me to a dojo," Matt Larsen says. “Seven days later, he showed up at the school, and afterward, we went to his house to work out. For the next nine months, off and on, I trained at his house on weekends."

Matt Larsen says he trained with Eizo Shimabukuro “off and on" because duty assignments frequently took him away from the Okinawan base. One such mission sent him to Korea, where he ended up fighting the ROK Marines' taekwondo champ in a bare-knuckle bout. “I was the only guy in the battalion who was training in martial arts, so they got me to do it," Matt Larsen says. “When I turned to face him, he kicked me in the stomach and knocked me into the crowd. I got up, and he tried a spinning back thrust kick, but I just charged him." After some give-and-take, he used his fists to dominate and then defeat the kicker.

Another assignment sent him to Thailand, where he fought in several muay Thai matches, and to the Philippines. “I met a guy in a tattoo shop, and he said karate weapons fighting was inferior to the Philippine arts," Matt Larsen remembers. “So I tried it, and he tore me up."

Although he was a good puncher back then, he wasn't a great one. “I entered a boxing smoker and lost," he says. “When it was over, I said to myself, 'I've got to learn that,' so I studied boxing the rest of the time I was in the Marines."

That willingness to augment his arsenal with new skills, coupled with an I-don't-give-a-damn attitude about losing, put Matt Larsen on the path to becoming a well-rounded martial artist with a nose for what works and what doesn't.

After four and a half years in the Corps, Matt Larsen enjoyed civilian life for all of three days — and then enlisted in the Army. “I went straight in the 1st Ranger Battalion and stayed for six years," he says. “Near the base in Savannah, Georgia, training was weak. There was a guy who taught taekwondo and aikido, and there was one who taught ninjutsu, and I studied with them. When I was stationed at Fort Lewis, Washington, I trained with Bud Toline, who taught yudo, hwa rang do and hapki yusul."

Matt Larsen's multi-art experience, which also encompassed kickboxing and judo, would soon serve him well because by the early 1990s, the mixed martial arts had exploded on the scene. “When I transferred to the 2nd Ranger Battalion, the battalion commander was Stanley McChrystal, who went on to become the commanding general in Afghanistan, and he'd given an order to reinvigorate the hand-to-hand combat program," Matt Larsen says. “They were doing ninjutsu before I showed up, which meant I fit in because I'd done some of that."

Matt Larsen was tasked — this time officially — with figuring out what worked and what didn't. “Because I was the most experienced martial artist around, it wasn't long before I was the combatives honcho in the battalion," he says. “We had Rorion and Royce Gracie come up, and we realized what we had to do. Brazilian jiu-jitsu wasn't a perfect fit because it's oriented toward competition. Nobody there will poke your eye out or punch you in the testicles. Our relationship to Brazilian jiu-jitsu is similar to Brazilian jiu-jitsu's relationship to what Esai Maeda taught the Gracies. We learned a lot from it, but we saw how it didn't quite fit what we did, so we added elements from other arts."

Matt Larsen molded that mixture until it fit the Army culture, and it proved to be a hit at Fort Lewis. “Two years later, Gen. McChrystal took over the Ranger Regiment and brought me down to Fort Benning to honcho the training for the entire regiment, which is about 2,500 to 3,000 guys," he says. The fledgling fighting system had left the nest.

Matt Larsen was transferred to Ranger School, which is run by the Ranger Training Brigade at Fort Benning, to rewrite the field manual on combatives. “They wanted to change the Army's doctrine to what we were doing," he says.

From the get-go, he knew his limitations. “The limited amount of time soldiers can devote to formal training means you won't get very far trying to have them perfect a catalog of techniques," he says. “Instead, MACP uses its basic techniques as a tool to teach a set of principles and training methods. These are reinforced as more advanced techniques are taught in a series of short courses that, over the soldier's career, act as a guided path of self-discovery."

MACP works because it never dictates how to reach a specific goal. “Instead, we teach soldiers to figure out how to accomplish the goal," Matt Larsen says. “A truck driver delivering food supplies and an airborne Ranger kicking in doors searching for bad guys have very different hand-to-hand combat needs, but that doesn't change the nature of how to train. Our program is intentionally about training methods and principles. Then, a soldier, whatever his mission may be, can still learn to fight."

The instruction begins with H2HC basics that are similar to what civilian martial artists study: how to punch, kick and knee-strike; how to fight in the clinch; how to integrate takedowns; and how to grapple on the ground. “You must have the techniques to implement the strategies the situation demands," he says. “Those techniques span the spectrum of combat, from bashing in somebody's head with your helmet to making sure you don't hurt an opponent who isn't your enemy."

Including techniques and strategies from across that spectrum to create what's known today as the Modern Army Combatives program meant Matt Larsen had to analyze the world's fighting arts. “While developing the program, we would put two people on their feet and say, 'You can only go for a takedown,' and it looked exactly like two wrestlers. Then we would say, 'Now you can knee each other.' The first thing that happened was they stood up to defend against knees. So we'd say: 'Let's evaluate the way you train for takedowns in wrestling. Is it good? Sure. What's wrong with it? Well, it gives you bad fighting posture.' We looked at every training method like that."

Inevitable Complications in the Development of Modern Army Combatives

Life would be a lot simpler if, whenever a belligerent invaded your space, you could just punch him in the face and be done with it. Alas, neither military nor civilian life is like that. “Hand-to-hand combat training has to address a variety of situations," H2HC expert Matt Larsen says. “It might be a guy who wants to kill you, or it might be a person who just doesn't want to do what you want him to do. It might be a person with Stockholm syndrome you're there to save, in which case you don't even want to hurt them. You have to do the appropriate thing, whatever it happens to be."

In a martial arts school, a sensei is free to reject students who are deemed unsuitable for learning deadly skills — which makes teaching them to do the appropriate thing a bit easier — but military recruiters aren't quite so selective. “When trainers get someone off the street, they have no idea what their values are or what their parents are like," Matt Larsen says. “We have to turn them into the sort of warrior our republic can be proud of, and MACP is a big part of that."

Robert W. Young is the editor-in-chief of Black Belt.