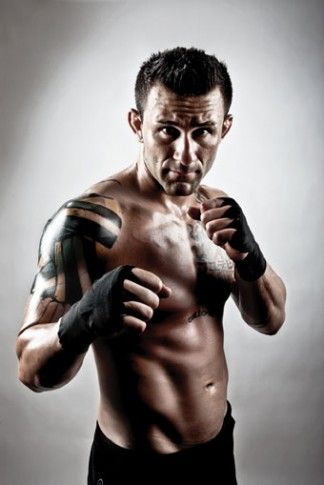 In combat sports, should you stand with your strong side to the rear or in front? Mark Hatmaker explores the history of the question and what answer MMA fighters have found effective today.

In the combat sports, a dilemma beginners face remains a point of contention even for the more experienced: Should you stand with your strong side to the rear or in front? Typically, beginners choose their leads by emulating what they see or adopting the advice of their first coach. Boxing has a tradition of taking right-handed fighters and placing them with their left side forward. Roughly 90 percent of all boxers adopt the left-side-forward stance, and that matches the percentage of right-handers in the general population. In MMA and other combat arts, there are differing schools of thought. (Bruce Lee's influential observations come to mind immediately.) That leads to a higher percentage of right-side-forward leads. In fact, MMA competition demonstrates a significant change from boxing doctrine. Instead of 90-percent orthodox stances, it's about 60 percent. Should we conclude that there are more left-handers in MMA than in boxing or the general population? Turns out the answer is no — the distribution is roughly the same. What we have instead are "deliberate southpaws." I confess to being one of them.

Joe Lewis recalls his glory days training with Bruce Lee and
competing on the circuit in this FREE download!
Joe Lewis: How the Bruce Lee Training Method
Made Him — and Can Make YOU — a Better Fighter

Before explaining this choice, let's look at why placing the strong hand to the rear became the norm. In the 18th century, the act of hitting another human being was turned into a science. The lead arm was held somewhat extended in front of the body as one might hold a foil or quarterstaff. This extended lead arm acted as both a defensive tactic — “Stop right there!" — and a range finder — “Methinks he's close enough to poleax with a powerful windup of my mighty arm."

The jab was not a go-to weapon in the arsenal. Instead, fighters circled one another, looking to unload powerful straights and swings primarily from the rear arm. With that in mind, placing the strong hand/arm to the rear for the windup made sense.

The advent of boxing gloves — then called “mufflers" — gave fighters with an entrenched strong rear hand an even greater impetus to keep it there. The mufflers made knockouts harder because of their cushioning effect, and the case for keeping the strong hand to the rear became even more compelling because a greater windup was now a necessity.

When the jab developed in emulation of the fencer's foil, boxing changed but stances did not. The jab was and is essentially a foil looking to stab and spear with precision. If the boxer were to truly mimic the fencer, he'd place his coordinated side forward just like fencers wield the foil with their dominant hand. Ninety percent of fencers hold their foil in their right hand. They prefer the coordinated hand forward because they're looking to strike with precision.

Boxers accepted the jab as a foil substitute, but why didn't they adopt the coordinated stance-shift? Again, the answer lies in the glove — it's hard to knock out an opponent when you have gloves on. Boxers erred on the side of power and kept the strong-side windup as their mainstay.

Explore the philosophy behind Bruce Lee's jeet kune do in this FREE download! Bruce Lee's Biography and the Birth of Tao of Jeet Kune Do

Which brings us back to MMA. Why are there so many deliberate southpaws? There are two answers. First, there are many athletes who were wrestlers, grapplers or Brazilian jiu-jitsu players before they transitioned to MMA, and, as a rule, shooting (seeking takedowns with leg shots) is taught with the coordinated side forward (usually the right side). So when it came to striking, many of these grapplers adopted a southpaw stance to stay as close to their comfort-zone stance as possible.

The second reason: MMA gloves are far lighter than boxing gloves, kickboxing gloves and muay Thai gloves. Having lighter gloves means less power is needed to deliver damage. With that said, light gloves allow for jabs that can land as heavy as a cross in standard boxing and enable the less-powerful hand to have the benefit of the windup. Light gloves put power back into both hands, and rather than the lead hand being a feeler, defensive tool or point scorer, both hands have KO power. This equalizing nature of light gloves allows grapplers to shoot in with their coordinated side forward. Therefore, we see more deliberate southpaws letting go of a stance that's now an artifact of a rule set tailored to a different era.

Mark Hatmaker is a Knoxville, Tennessee-based practitioner of boxing, wrestling, jiu-jitsu and muay Thai and the founder of Extreme Self-Protection. He is also the author of the best-selling No Holds Barred Fighting series, Boxing Mastery and No Second Chance: A Reality-Based Guide to Self-Defense, as well as a highly regarded coach of professional and amateur fighters, law-enforcement officials and security personnel.