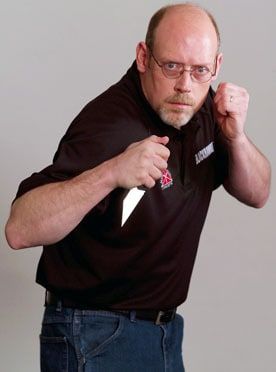 Edged-weapons expert Michael Janich delineates what he considers the ideal way to grip your knife so as not to lose your weapon -- or your fingers -- in the event of an altercation requiring you to draw your blade!

In this exclusive video, edged-weapons expert Michael Janich discusses the three main criteria constituting a good knife grip and explains his favorite, which he calls "the Filipino grip." With more than 35 years of martial arts and edged-weapons experience, Michael Janich is one of America's best-known knife-fighting experts. Michael Janich was featured on the cover of Black Belt magazine in September 2009 and later inducted into the prestigious Black Belt Hall of Fame as the 2010 Weapons Instructor of the Year. Widely recognized as an authority on edged-weapon design who's designed knives for Spyderco, the Masters of Defense knife company, and BLACKHAWK!, Michael Janich has served as the special projects coordinator for Spyderco and has offered state-of-the-art tactical training as co-host of The Best Defense on the Outdoor Channel.

Learn how to draw your knife when you need it most in this FREE download!
Knife-Fighting Techniques: 9 Essential Drills to Deploy Tactical Folders for Self-Defense Moves Under Any Conditions

"Knife fighting has always been one of the most misunderstood topics in self-defense," Michael Janich commented in the cover story for the September 2009 issue of Black Belt. "Although everyone agrees that the knife is a potent weapon, there's no consensus when it comes to effective edged-weapon tactics. Some practitioners swear by the traditional European and Asian systems. Others look to military combatives as the ultimate source of blade techniques. Still others regard prison-style knife tactics as the best."

So this begs the question: Upon which methods should you bet your life?

Knife-fighting techniques expert Michael Janich's answer: "That depends on what type of knife you carry and what situations you're likely to face. If you're a soldier carrying a full-size combat knife in a war zone, your needs and rules of engagement are different from those of a convict armed with a sharpened toothbrush or a civilian carrying a tactical folding knife."

"My exploration of knife tactics began with the classic military systems," Michael Janich says. "In addition to reading about and experimenting with the work of Anthony Drexel Biddle, William E. Fairbairn and John Styers, I had the rare privilege of consulting closely with the late Col. Rex Applegate and personally picking his brain on World War II-era knife combatives. I also thoroughly researched the works of early modern authorities like Michael D. Echanis, David E. Steele and James Keating, as well as masters of the Philippine and Indonesian systems. Every step of the way, I learned something — even if it was what not to do with a knife."

"The result of my 30-plus years of training, research and analysis is Martial Blade Concepts," Michael Janich says. "It draws heavily from battle-proven tactics taught in the Philippines and Indonesia and adapts those methods to the needs of modern personal defense. Although it can — and has — been adapted to military environments, it's primarily a self-defense system. As such, its greatest value lies in its relevance to the problem at hand: the effective defense of your life and the lives of loved ones against the types of attacks that occur in our society."

Michael Janich is the sole author of six books and co-author of seven, including Bullseyes Don't Shoot Back: The Complete Textbook of Point Shooting for Close Quarters Combat, which he wrote with the late close-combat legend Col. Rex Applegate.