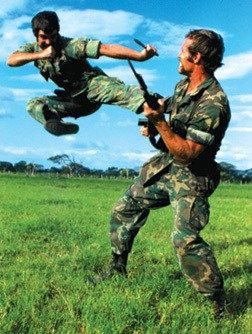 My first exposure to the work of Michael D. Echanis was in a copy of Soldier of Fortune that my martial arts instructor gave me back in 1977. Frustrated with the impractical knife-defense tactics of the art I was studying, I had approached him to ask for a new, more realistic direction in my training. The magazine had an in-depth interview with Echanis that turned out to be the catalyst I needed. I was studying a "modern" martial art at the time, but like most traditional arts, it was still very structured and technique focused. When my training partners and I increased the intensity and realism of our training to try to replicate real attacks, its techniques often fell short. In reading the profile on Echanis, it was immediately obvious that he had taken a different approach to his training and the instruction he was providing to the U.S. special-operations community. Based on his own hard-won combat experience in Vietnam, he had developed an uncompromising set of standards as to what constituted practical, realistic, combative tactics. While he readily acknowledged that the classical fighting arts had a lot to offer, he drew a hard line between martial tradition and martial technique that was still viable and relevant in modern warfare. Echanis' irreverent, results-oriented approach to the fighting arts also embraced the full spectrum of weaponry, favoring the most practical and efficient, which included the knife. Other articles in Soldier of Fortune and Black Belt during that time provided additional insights into Echanis' fighting methods and the system of hwa rang do on which they were based. However, it was the release of his Special Forces/Ranger-UDT/SEAL Hand-to-Hand Combat/Special Weapons/Special Tactics book series that really revealed the direction of his training. That three-book series was distinctly different from the other martial arts books that had been published before that time in that they actually addressed close-combat situations that were relevant to a military operational environment. They also pulled no punches, presenting hard-core tactics of knife fighting, stick fighting and unarmed combat that would enable real warriors to kill and win on the battlefield. And in the process, they served as both a turning point and a powerful catharsis for countless martial artists seeking to understand the reality of close combat — just as I was. Using Echanis' books as a template, I and several like-minded students in my martial arts group drastically changed the direction of our training. We abandoned classical martial arts weapons and focused on practical ones — particularly knives. We increased the intensity and realism of our training and put it into context, practicing in the areas and environments where our skills would most likely come into play. Based on the understanding we gained from that process, we also realized that we'd never again go back to traditional martial arts training. Years later, I had the privilege of speaking with a number of special-operations veterans who had trained directly with Echanis or experienced the close-combat programs that he created. Through their comments, it was clear that the effects of Echanis' programs were profound and had indeed set a new standard in realistic, combatives training. Many of these men still used Echanis' methods as a basis for their personal close-combat tactics and shared the belief that his training represented a distinct turning point in the evolution of modern warfare. Although his life was cut tragically short, Michael D. Echanis had a profound impact on the martial arts world and the direction of modern military combative training. He combined his personal quest for a comprehensive warrior art with an uncompromising commitment to combative function. And in the process, he gave us an enduring legacy of close-combat philosophy and technique that will continue to inspire us for generations to come.

Michael Janich is a freelance writer based in Longmont, Colorado. He has more than 35 years of martial arts experience and is one of America's best-known knife-fighting experts