Matt Larsen Shows You Self-Defense Moves Against a Knife Attack 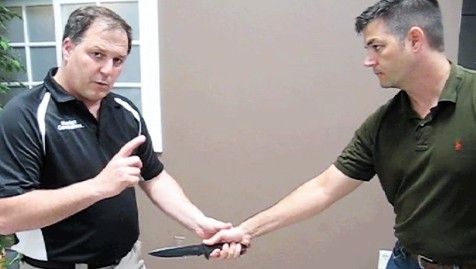 Editor's Note: In this exclusive close-quarters-combat video, Matt Larsen — Modern Army Combatives Program (MACP) creator and author of the critically acclaimed book Modern Army Combatives: Battle-Proven Techniques and Training Methods — discusses and demonstrates training protocols for assessing and responding to opponents armed with edged weapons. Modern Army Combatives Trains Soldiers to Efficiently Employ Self-Defense Moves for Any Situation Knife fights don't really start in the way that a lot of people train for. They don't start, for example, with the knife in somebody's hand. They start just like any other fight, only one of the people has a knife on his or her person. So the first thing is: How do you know whether the person you're fighting is armed with a knife or a gun — or anything? Most of the time you don't, so you have to fight everyone as if they're armed.

The way we train that in the Modern Army Combatives Program (MACP) is — after we've got a pretty good level of training — we introduce them to that concept and then we give them a 100,000-volt stun gun to grapple over. We can put it in somebody's pocket, nobody in the class knows who [and] they fight. If the guy can get his knife out, somebody pays the piper.

At some point during the training, one guy will get [the knife] out, the other guy pushes away and then you have — which is a very realistic scenario — bad guy with the knife, good guy without [a] knife. Now how do you defend yourself from the person with the blade? The first thing is, you don't want to be engaged. If he gets a hold of me with [his left] hand, then he's just going to play 'sewing machine' and I'm going to have a hard time defending [against] it. So I want to stay as far away as possible.

What happens is he's got to extend to get to me, which means [his knife] arm is open to attack. So using the principle that I want to stay as far away from him as possible, the first thing I'm going to do is strike him and try to get [the knife] out of his hand without becoming decisively engaged while it's difficult for him to grab me.

If [the knife smack] doesn't work, I might get sucked in more. Techniques become more effective as they become more dangerous, so one technique I might use is to strike the back of his hand and strike the front of his blade, which will hopefully bring the knife through the weakness in his grip.

If that doesn't work, a technique that is slightly more committed is to strike his wrist and the back of his hand, which will bend his wrist, and as the wrist maxes out, the fingers become weaker [and can't] hold the grip.

Now if those things don't work, another thing I can do is as he comes toward me, I can pull him toward me off his base. Once I've pulled him off his base, strangely, techniques that you see in various other martial arts that people — who don't know much about the way a fight really happens — think aren't going to be effective actually are effective a lot of the time because of how committed he is to the attack.

The Role of Commitment in Modern Army Combatives Training

If he's going to stick me, he's going to have to really come for it. So I want to pull him off-base and, at this point, I can do many different techniques — and what makes them work is the fact that he's really committed. And so we practice that with fear in me to not get stabbed and commitment on [the attacker's] part to stab me.