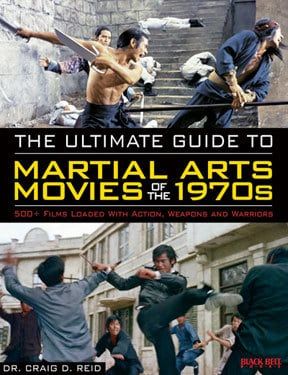 Kung fu movie fans might think they know everything about this popular genre, but would they know which kung fu movie had the longest fight scene in the history of films? Or which kung fu movie star had to bite the head off a live lizard? Probably not. But Dr. Craig D. Reid — author of The Ultimate Guide to Martial Arts Movies of the 1970s— can tell you. He knows everything about kung fu cinema and martial arts movies. Reid is one of America's most respected martial arts film historians and critics. In 1979, he became the first regular Caucasian and American stuntman in Chinese kung fu movies and kung fu TV soap operas in Taiwan. Since then, he has accrued credits as a screenwriter, fight choreographer, kung fu scholar, TV personality, and university and guest martial arts lecturer. On January 20, he'll be sharing his martial arts movie expertise with the Pacific Asia Museum's Active Cultures series. Active Cultures is a series of events that pairs engaging speakers in a dynamic, conversational program, which includes a Q-and-A with the audience. "I saw my first kung fu film at the V Drive-In in Vestal, New York," Reid says. "In an instant, I wanted to live and learn and watch every kung fu film ever made." In fact, when compiling the material for his book, Reid relived these transformative times by watching more than 500 kung fu films from that era. The reviews in the book include extensive knowledge of martial arts history, cinema and fight choreography. Reid will discuss how influential the films of the 1970s were in martial arts cinema, how they brought major breakthroughs in fight choreography and filmmaking, and how they built national identity and pride. He will also cover the rise of the genre's most influential actors/directors and the creation of a worldwide following.

TAKE THE MARTIAL ARTS MOVIE JOURNEY WITH THE MASTER OF KUNG FU CINEMA! “Calling this comprehensive encyclopedia The Ultimate Guide to Martial Arts Movies is an apt description," says John Fusco, who wrote the martial arts blockbuster The Forbidden Kingdom. “Like the treasure trove of the 500-plus titles it celebrates, the book is a feast." AVAILABLE NOW in our online store!

Tickets to the event can be purchased through eventribe.