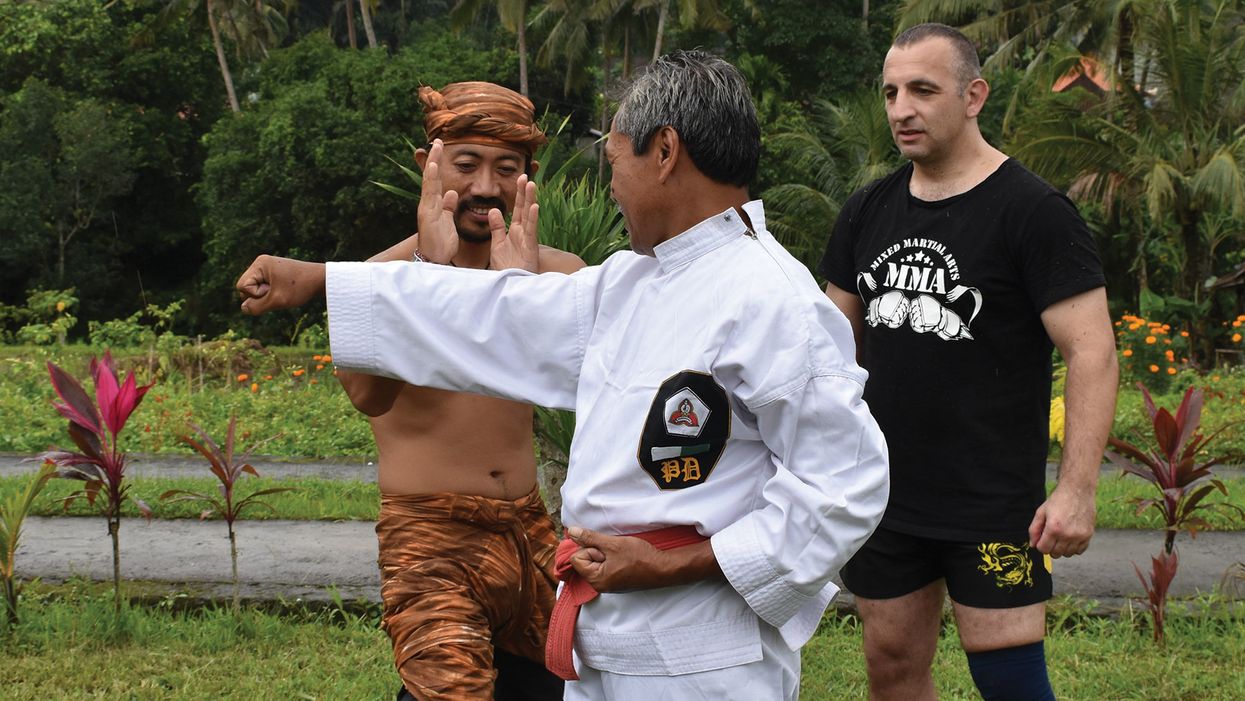 Black Belt debuted this Destinations column in 2010, and during the decade that followed, I've taken readers to a series of exotic locales, including Borneo, Cambodia, China, India, Indonesia, Laos, Malaysia, Mongolia, Myanmar (formerly Burma), Philippines, South Korea, Taiwan, Thailand and Vietnam. These journeys have led me to a number of conclusions about the state of the martial arts around the world.

Bruce lee once said, "i do not believe in styles." He went on to explain that because we all have two arms and two legs, the techniques that are available to us and that are effective against human opponents are basically the same. For this reason, the styles we see in different countries do not necessarily exist because they are superior in a fight; they exist because they are expressions of culture.

While investigating the grappling arts, for example, I've experienced Japanese judo, Brazilian jiu-jitsu, Indian kushti, Balinese mepantigan, Korean ssirum and Chinese san da, along with plenty of others. Some practitioners wear a loincloth, while others sport a wrestling jacket, a gi or a specially made belt. Some matches take place before tens of thousands of spectators, while others unfold in front of a few fellow practitioners. Some allow students to earn a good living — win a medal and retire! — while others provide practically no prize money. Yet many of the same techniques are present in all the arts. In fact, pick a random move like the fireman's carry, and you'll find it in every art I just listed.

Nevertheless, the overall look of the individual martial arts — for instance, kushti and san da — couldn't be more different. I completely agree with Lee: The variations we see in styles are the expressions of the cultures in which they developed.

Two major strains of culture permeate Asia: Chinese and Indian. By following the spread of these cultures, we can follow the spread of the martial arts. Vietnam, Korea and Japan are among the countries that exhibit Chinese influences. We find Confucian ideals, such as hard work and dedication to study. The languages and sometimes the writing systems are related to old Chinese. The religions often are linked to Chinese Mahayana Buddhism. While kung fu, vovinam, karate and taekwondo look different, they bear more similarities than they do to the arts that follow the Indian cultural path, including muay Thai, silat and mepantigan.

In Southeast Asia, we find influences from Hinduism and Theravada Buddhism because of India's cultural reach. The writing systems are similar to Sanskrit, and the languages often have words borrowed from ancient India. The martial arts of Cambodia, Laos and Myanmar resemble muay Thai. In fact, the Malaysian art of tomoi, which predates silat, is related to old muay Thai styles from southern Thailand. Tomoi includes grappling, as well as the typical muay Thai kicks, punches, knees and elbows. Muay boran in Thailand is closely related to krabi krabong, the Thai art of stick and sword fighting. Burmese lethwei is a close relative of Thai kickboxing.

Wrestling is universal. Some type of it exists in nearly every culture on Earth. It's the oldest documented martial art. The earliest wrestling images are in the tomb of Beni Hasan in present-day Egypt. They date back more than 4,000 years. Amazingly, the images depict wrestling holds and throws that are still used today.

Most forms of wrestling award the win to the person who throws the opponent to the ground. Some, however, are a bit more complex, requiring victory in two out of three bouts or three out of five. A few styles require the opponent's shoulder blades to touch the mat. In the case of BJJ, wins can come from submissions, which is rare in traditional wrestling. Two theories attempt to explain this developmental path.

Theory one: Wrestling started as a way to train soldiers for combat. In ancient times, when two large armies, bristling with sharp weapons, clashed, those who fell were quickly killed. So when soldiers wrestled in preparation for combat, if one person put his opponent on the ground, the opponent was considered dead. Game over!

Theory two: Throwing an opponent to the ground was an easy-to-see symbolic victory. While a sport like Olympic wrestling can be difficult to understand, anyone — even a person in the middle of a large crowd — can follow action that leaves one man standing and the other on the ground. Yes, wrestling was already a spectator sport thousands of years ago.

Boxing has become universal. Debates over which martial art is better have raged ever since human beings practiced more than one martial art. Consider the original purpose of the UFC: to determine if karate could beat jujitsu, if kenpo could beat sumo and so on.

When we look at martial arts around the world, we see countless kicking styles, all of which have their pluses and minuses. Kyokushin has vicious kicks, and they look different from muay Thai kicks, which are equally vicious. Taekwondo kicks are faster and higher than savate kicks, but savate kicks are extremely accurate. Dutch kickboxing has different kicks than does silat or kung fu.

When it comes to hands, however, there really is only one art: Western boxing. Kicks may differ from country to country, but the hand techniques we see in most countries' martial arts are the same as in boxing.

In some ways, boxing is the antithesis of the traditional martial arts. Traditional arts generally have hundreds or even thousands of moves. Students learn forms, which they practice over and over. The best practitioners are often those who can most accurately emulate their teachers in the greatest number of forms. In contrast, boxing has a handful of techniques, and the best practitioners are those who can combine that limited number of moves in new and creative ways.

It's no wonder so many martial arts around the world feature the same hand strikes as boxing. I view it as a testament to the efficacy of those strikes. (To be continued.)
Antonio Graceffo's book Warrior Odyssey is available at shop.blackbelt.com.