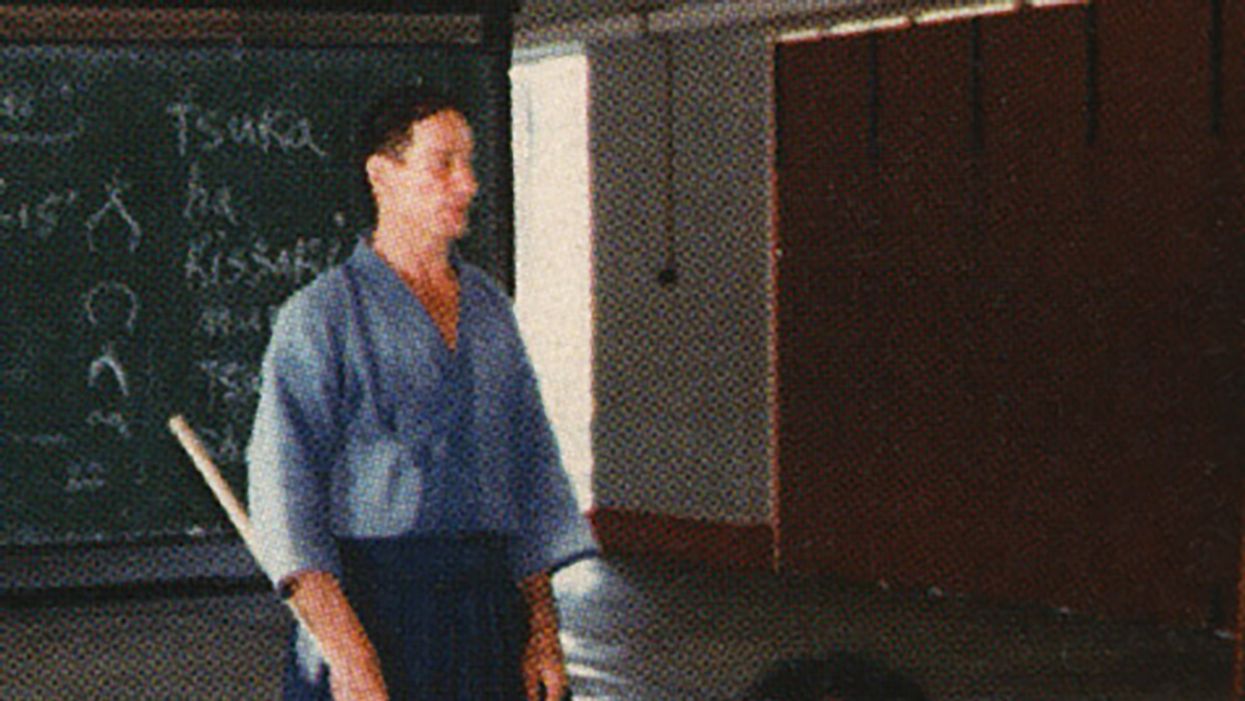 After this Marine-turned-martial-arts-researcher delved into the Japanese martial arts and ways, he worked to help people around the world get access to them via instruction and authoritative written material.

Donn F. Draeger's personal life remains a mystery, if not actually mysterious. It's fairly well-established that he was once married, possibly to a fellow Marine, and that the couple had a son before the union ended, but to date nothing more is known of that part of his life. Lady friends came and went, but not one remained long after she realized that his ultimate devotion in life was to martial arts training and study. Focused like a laser, he was too self-directed for permanent or, apparently, even long-term relationships.

While that would make it appear that he was somewhat self-absorbed, anecdotal evidence indicates something very different. Practically all those who came in contact with Draeger recall his essentially gentle and easy manner — quick to advise, help or educate without thought of personal benefit. As one of the earliest postwar foreign budoka in Japan, he seems to have acted as a true anchor and one-man support system for the many foreign martial artists who came to study in the 1960s and '70s, helping them adjust to life in an unfamiliar culture.

Donn Draeger on the set of You Only Live Twice with Sean Connery.

During his own early years on the Japanese islands, Draeger began training in the classical martial arts and was permitted to join the Kobudo Shinko Kai, the Classical Martial Arts Preservation Society, a research organization in which he was the sole international component. Believing the society's focus too narrow, however, he eventually broke away to form what became known as the International Hoplology Research Center, now the International Hoplology Society.

Well-read in a variety of disciplines, particularly history, anthropology, engineering, sociology, physical education and cultural studies, Draeger nevertheless found his attempts at establishing hoplology as an academic discipline to be an uphill struggle. He faced a generally hostile scholarly fraternity that was aghast at the idea of formally studying combative behavior in human activity, and as something of a “jock" personality — a typical Marine, he was fond of ribald puns and bawdy limericks — he was not taken seriously by the professional scholarly community, which viewed him as nonintellectual.

(However, witnesses to the occasional debates Draeger had with professional academics maintain that he acquitted himself extremely well. In addition, his books are soberly written treatises on what even for many Asian specialists are esoteric subjects.)

In the meantime, Donn Draeger continued his career in the Marine Corps. Some time in the early 1950s, he was sent to South America on behalf of both the USMC and the State Department on some sort of intelligence duty before returning to regular service. As second in command at the Inter-American Defense Fund in Washington, D.C., he practiced judo regularly at the Pentagon dojo with such stalwarts as Robert W. Smith and Capt. John Denora. He also continued his weight training and pioneered the postwar establishment of judo associations in the Americas.

A career as an officer would be a full enough plate for anyone, but Draeger's involvement with his chosen arts hardly ended with training. In America, he co-founded the first national judo body, the Amateur Judo Association, and later played a role in establishing the Judo Black Belt Federation, which became the United States Judo Federation.

He also co-founded the Pan-American Judo Federation and either founded or helped develop several Eastern U.S. judo clubs as well as the East Coast Black Belt Association. For many years, he acted as the liaison between Japan's Kodokan Judo Institute and the United States Judo Federation. Later, he introduced the Japanese stick-fighting art of jodo to Malaysia and America, helping establish that system's international federations.

One of Donn Draeger's many books.

A reduction in U.S. forces in the postwar period meant that Draeger wouldn't enjoy a full career in the Marines. Possibly riffed out in 1955 or 1956 (rather than resigning his commission, as is generally assumed), he took his discharge after roughly 16 years of service to end with the peacetime rank of captain and the wartime rank of major.

Thereafter, he moved to Japan and commenced a career as a student, teacher and writer of the martial arts, penning a series of articles for Strength and Health and Muscular Development magazines and writing the first Western, nonpopular pieces on shindo muso-ryu jodo and Mas Oyama's kyokushinkai karate-do. His first book Judo Training Methods: A Sourcebook, co-authored with Ishikawa Takahiko, was published in 1961 and has recently been reissued by Kodansha.

But Draeger was more than a highly trained and skilled martial artist. As an author and researcher with several dozen books to his credit, he crafted works that are considered the most reliable and often the only texts on Asian combative systems in foreign languages. His most famous books are Comprehensive Asian Fighting Arts (co-authored with friend and colleague Robert W. Smith) and his celebrated three-volume Martial Arts and Ways of Japan (a series composed of Classical Bujutsu, Classical Budo, and Modern Bujutsu and Budo). At different times, Draeger also served as a contributing editor for Judo Illustrated, published several issues of a journal called Martial Arts International and established Hoplos, the official organ of the International Hoplology Research Center.

Even his recreation tended to be combatively oriented. By the time of his death, he'd amassed a substantial collection of Japanese prints representing combat systems, particularly jujitsu and sumo. In 2004 a selection of those sumo prints, on loan from his deshi Phil Relnick, who inherited them, became the basis for a well-received exhibition at the Seattle Art Museum. It was titled Larger Than Life Heroes: Prints of Sumo Wrestlers From the Donn F. Draeger Collection.

For some time during the early to mid-1960s, Donn Draeger lived with a number of housemates in a large Meiji-era dwelling in the Ichigaya district of Tokyo. The building became something of a waystation for transient martial arts students in the '60s, among them judoka and karateka Jon Bluming of Holland, Jim Bregman of the United States and Doug Rogers of Canada, as well as the Welsh karateka and writer C.W. Nicol, whose Moving Zen evokes wonderfully this now-storied period.

While in Japan, Draeger made ends meet by living on his military pension, teaching English conversation, instructing at the Kodokan and occasionally serving as an extra, stuntman or stunt coordinator for Japanese and foreign films. While his most famous “role" was as Sean Connery's stunt double in the James Bond opus You Only Live Twice (1967), he also took some falls for John Wayne during the comic jujitsu scene in John Huston's Barbarian and the Geisha (1958).

Draeger's personal habits were simple and natural. Disdaining tobacco and alcohol, he spent his final years in a small, two-room flat in Narita, Japan, that was neither heated nor air-conditioned. Later in life, he usually rose with the sun and went jogging, often with the local baseball team. Like many uber-physical people, as he grew older he was mortified to discover that he couldn't keep up with players in their teens or early 20s.

While trying to establish hoplology as a recognized academic discipline, Draeger taught as a guest lecturer at the University of Maryland and the University of Hawaii. He also spent approximately four months a year on field trips in Asia teaching, visiting schools and studying combative methods, which he subsequently analyzed, recorded and sometimes published.

During the last of those journeys in 1979, misfortune struck Draeger and his team on the island of Sumatra. While visiting the Atjeh tribe, it appears that the entire group was somehow poisoned — perhaps deliberately — and as a result developed severe amebic dysentery requiring hospitalization. Although he recovered from the illness, Draeger began losing weight and grew increasingly weak. His legs swelled, causing great pain, and he found it difficult to walk or stand for very long. Serious training became difficult, then impossible.

After repeated visits to Tripler Army Medical Center in Honolulu, it was discovered that Draeger had cancer of the liver. Returning to his home state to die, he stayed first with his half-brother before moving into a veteran's hospital. It was there, on October 20, 1982, exactly 92 years after his hero Sir Richard F. Burton died, that Donn Draeger passed away from metastasized carcinoma. He was buried at Wood National Cemetery in Milwaukee, a 50-acre final home to more than 37,000 American veterans. Draeger's grave lies in Section 4, Site 377.

Donn Draeger may have passed on — or “changed," as the Taoist saying goes — but his legacy continues more than a generation after his death. His books remain standard texts, his students continue teaching and researching, and as of this writing, a full-length biography is being prepared by his hoplological successors. The International Hoplology Research Center has become the International Hoplology Society, publishing Hoplos and a newsletter called Hop-lite. Its director Hunter B. Armstrong, a former deshi of Draeger's who accompanied him on several research trips, has continued with the onerous task of developing hoplology as a scholarly discipline.

This is as it should be. As something of a gold standard for martial artists the world over — competent, calm, studious, educated and literary — Donn Draeger transformed Western combative activities from a pastime and technical study to a formal, expansive investigative examination.

A towering figure in the martial arts world, he effected an influence that could not readily end with his passing. It will continue to illuminate the study of international combative systems for the foreseeable future, providing impeccably wrought portals into the complex world of the fighting arts.

About the author: Paul Nurse is a freelance writer based in Burlington, Ontario, Canada.