Martial Arts Movies: How You Can Get Involved in the Live-Action Version of the Martial Arts Comic Book "Black Salt" 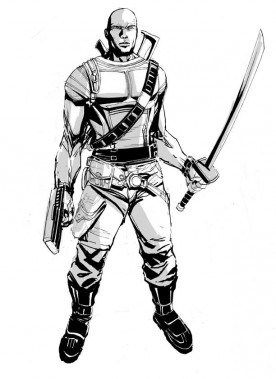 Ready for your close-up? Find out how you can audition for the lead role in the short-format martial arts movie "Black Salt," based on the comic book of the same name!

Have you heard of a comic book character named "Black Salt?" No? Well, you might hear more about him soon! Ratti Entertainment LLC recently announced that the comic-book character is making its move from ink and paper to live action in the form of an independent short film. According to the Black Salt The Movie page on Facebook, Black Salt is a live-action short film project in development. Its plot revolves around Samuel Lincoln Tharpe, Interpol's deadliest black-ops agent, who may be the only thing standing in the way of a new world holocaust at the hands of an evil yakuza. Tharpe's quest to prevent this catastrophe takes him to the Shaolin Temple, where he must use his past Shaolin training to fight for the salvation of the world. Exciting stuff, right?

Directed by Ben Ramsey, this martial arts movie will include the star power of:

How You Can Get Involved in Making This Martial Arts Movie!

1. Well, to bring this martial arts movie project to fruition, Ratti Entertainment is looking for crowd funding via Indiegogo. (For those who may be wondering, "crowd funding" is the practice of funding a project or venture by raising small amounts of money from a large number of people, typically via online channels.) So if you've got a few extra bucks and you want to help a martial arts movie get off the ground, here's your chance to contribute!

2. The production team for Black Salt will be holding an open casting call Saturday, March 22, 2014 from 9 a.m. to 5 p.m. at Wushu Shaolin Kung Fu, located at 14133 Crenshaw Blvd., Hawthorne, CA 90250 for the role of the aforementioned Samuel Tharpe in this upcoming martial arts movie. The producers are in search of an African-American male between the ages of 33 and 43 who:

For those interested in auditioning, send your information to Dee McGhee at siriustalent@yahoo.com, who will send you your invitation along with your audition sides and registration information.