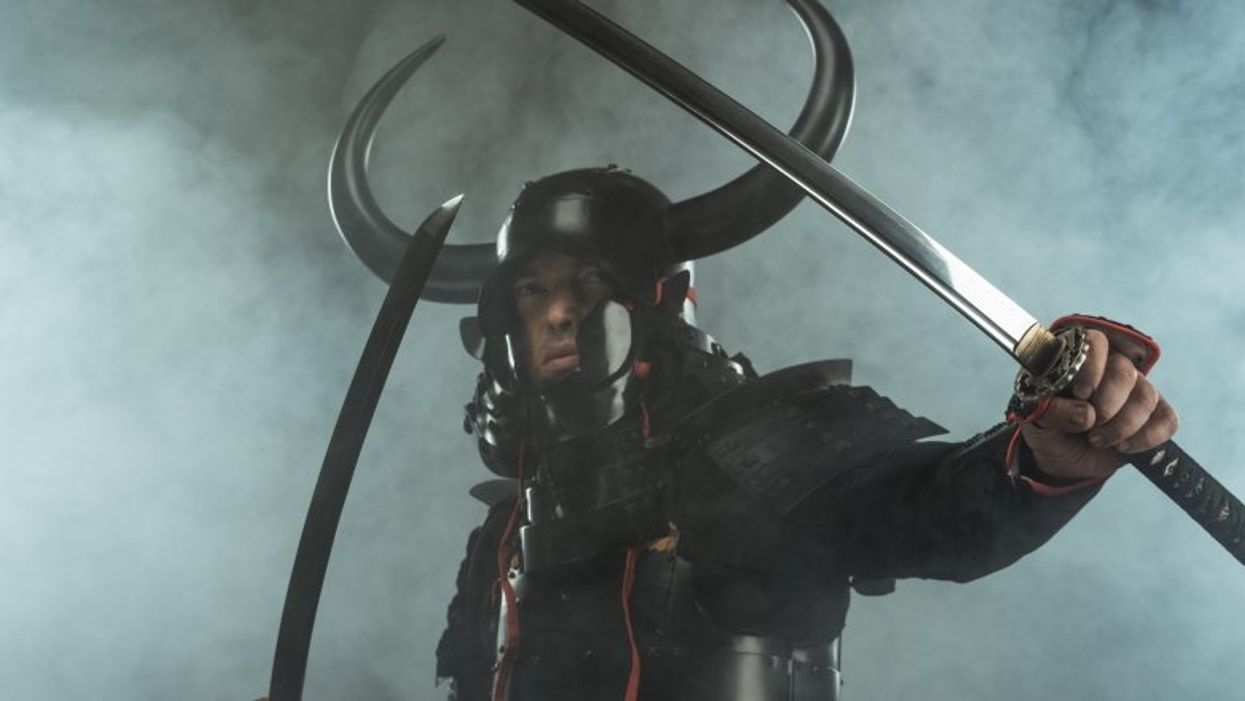 If you've ever thought it odd that fearsome samurai warriors were governed by the gentle teachings of Zen, you need to read this post. Prepare to be enlightened!

People today may find it unusual to think of religious philosophy as the backbone of military training, yet that's just what we find when we examine the military class of early Japan. Westerners are often confused by the term “religious philosophy" because in the West, those two subjects are distinct schools of thought. Until recently in Japan, however, there was no separation: They were connected in the sense that religion was philosophy acted out as a way of living. One of the more popular Eastern religions, Zen, concentrates on living life to the utmost in the here and now, as opposed to focusing on the afterlife. If Zen practitioners live in this very moment, all the rest — whatever else that may entail — will fall into place naturally. That includes the main concern of the samurai warriors: proper action in the midst of deadly combat. Two major turning points affected the development of the samurai. The first was the Gempei War (1180-1185), which led to the rise of the official warrior class. The roots of this war began in the Heian period (794-1185), when the prominent imperial family names were the be-all and end-all of social status, as well as the key to the imperial court. The Fujiwara lineage was becoming too complicated and far-reaching for it to retain its prestigious air. Thus, “excess members of the imperial line were cut off from it and given the family names of Minamoto (also known as Genji) or Taira (also called Heiki)." (Reischauer 1989, 40) These families then migrated to other areas of Japan and used their imperial heritage to form a new aristocracy over the descendants of the old provincial uji (small counties that were unified by the worship of the same god, usually an ancestor). (Reischauer 1989, 40) Ready to start learning the way of the samurai? Order a copy of Samurai Swordmanship Volume 1: Basic Sword Program by Masayuki Shimabukuro, Carl E. Long and Black Belt magazine. On sale now on Amazon! As these families established that new form of provincial aristocracy, the hunger for court positions remained as strong as ever. Beginning in the late 11th century and continuing until 1185, the clans of Minamoto and Taira fought desperately to gain a foothold in the imperial line. Soon enough, a major battle ensued — and nearly wiped out the Minamoto clan except for two sons of a general named Yoshitomo: Yoritomo and Yoshitsune. Reischauer wrote, “Yoritomo extended his control over the Kanto area, and his younger brother Yoshitsune then seized the capital area for him and pursued the Taira down the Inland Sea to its western end, where he finally annihilated them in 1185 at Dan-no-ura in a naval battle." (1989, 43) That conflict became known as the Gempei War. In recognition of the Minamoto clan, in 1192 the emperor declared Yoritomo to be the realm's shogun, thus beginning the reign of the warrior class. (King 1993, 44) That happened one year after the return of Eisai, founder of Japan's first definitive Zen sect.

The second important incident that contributed to the development of the samurai was the establishment of the reverence for the sword. Nearly a century after the battle at Dan-no-ura, Japan was threatened by an outside entity — the Mongols, who had already conquered China, Korea and parts of Europe. When the Mongols turned their attention to Japan, they conveyed their demands to the Japanese court in 1266. (Reischauer 1989, 47) Japan refused, and Mongol forces were dispatched for Kyushu. Had it not been for bad weather — which made the Mongols retreat — the Japanese surely would have lost to the Mongols' superior archers.

A second Mongol attack was launched in 1281 with some 140,000 men, yet the invaders were held offshore by Japan's coastal fortresses. (Reischauer 1989, 48) That gave the Japanese the upper hand by enabling them to use smaller boats to board the Mongol junks and fight at close range, thus demonstrating the superiority of the Japanese blade.

Following several such attacks by the Japanese, a typhoon — known as a kamikaze, or “divine wind" — destroyed the Mongol army. From this battle onward, the Japanese warrior class regarded the sword as the weapon of choice. Because great strength of will and concentration, as opposed to just technical skill, are needed to succeed in lightning-fast blade duels, the samurai turned to Zen.

Zen began in India. Around 440 to 520, a priest named Bodhidharma taught that one could attain nirvana through meditation, not just through rigorous study of the sutra (scriptures). After learning the dharma (Buddhist teachings on law and duty), Bodhidharma was told to travel to China to teach this method. (Bodhidharma 1987, x) That happened because India had grown accustomed to keeping scriptures in a sacred light. Being the birthplace of the Buddhist tripitika (three baskets of teachings) and the home of Hinduism (which has as its defining factor the acknowledgment of the authority of the Vedic scriptures), there didn't seem to be much room in India for Bodhidharma's lack of reverence for the scriptures.

Although meditation wasn't new to India, the texts that pointed to those meditation practices were still held in the highest regard. Bodhidharma added more emphasis to meditation and took it away from the scriptures — as can be seen in his Bloodstream Sermon: “The true way is sublime. It can't be expressed in language. Of what use are scriptures? The ultimate truth is beyond words. Doctrines are words. They're all cradles of rebirth." (Bodhidharma 1987, 29)

China, although previously exposed to doctrinal Buddhism, seemed to be a better prospect for large-scale acceptance of such teachings. Thus, having arrived in Southern China around 475, Bodhidharma began to spread his ideas of Chan (Chinese for Zen) meditation with his own twist: “While others viewed Zen as purification of the mind or as a stage on the way to buddhahood, Bodhidharma equated Zen with buddhahood and buddhahood with the mind, the everyday mind." (Bodhidharma 1987, xv)

Once in China, Zen was exposed to Taoism. Taoism is the way of nature. The Tao is within everything. The goal of Taoism is to be in harmony with the Tao. With this goal in mind, sages such as Lao Tzu and Chuang Tzu wrote about what a Tao-governed life should be. However, as descriptive of the Tao as these writings were, they were enigmatic in their explanation of a concrete method of bringing about such a life. (King 1993, 11)

Zen, with its teaching of the buddha-nature within everything, intermingled with Taoism very easily. “The word 'Tao' was often used in Chan Buddhism to express the supreme wisdom-reality of [this] Buddhist truth." (King 1993, 10) What Chan offered to Taoism was the organized method of letting the buddha-nature (Tao) arise in one's life here and now. This is not to say that the two religions ever officially merged because they did not, but Zen did benefit greatly from exposure to Taoism.

Carl E. Long and Masayuki Shimabukuro wrote Samurai Swordsmanship: The Batto, Kenjutsu and Tameshigiri of Eishin-Ryu for martial artists like you — people who yearn to further their understanding of Japanese swordsmanship. There's a copy waiting for you now on Amazon.

This new form of Buddhism, with its friendly association with philosophical Taoism, gradually developed into one of the prominent religions in China. After the death of the sixth patriarch Hui-neng (638-713, known as Eno in Japan), five distinct schools were formed. The two most prominent became known as Rinzai (founded by Lin-chi around the mid-ninth century) and Soto (founded by Dogen in the mid-13th century). (Deshimaru 1996, xxxiii)

The Chan teachings made their way to Japan around the seventh century and were adopted as part of the spiritual training of the Tendai sect and given a home at Enryakuji. Eisai, a monk from that temple, traveled to China to deepen his Chan understanding and returned in 1191 as an ordained Rinzai monk to establish a temple in Kyoto specifically for Zen practice. (King 1993, 28)

Zen was a seedling that was planted during the Kamakura era and blossomed during the Ashikaga era. From then on, Zen continued to color life in all aspects of Japanese culture — especially the samurai class, which was socially elevated in 1192 by the emergence of the shogun.

As stated above, the establishment of Rinzai Zen as a separate and distinct form of Buddhism occurred in 1191 with the return of Eisai from China. Eisai's new form of Buddhism was not immediately accepted by the established sects. In fact, he was expelled from Kyoto but soon won the favor of the shogun in Kamakura. Eventually, five major Zen temples were built, and they became centers of literature, art and learning. (Reischauer 1989, 53)

The fact that the Kamakura shogun took a liking to Eisai's new method could be considered the first major advancement of Zen in Japanese society. As Reischauer wrote, “Warrior leaders came to draw on the Zen priesthood for both scribes and advisers, and they themselves sometimes retired to Zen monasteries when they wished to escape the pressures of secular life." (1989, 53)

Keep in mind that these were the same people who held the majority of power in the Japanese government. Had Eisai stayed in Kyoto and not been supported by the people wielding the most authority, Zen might have been overshadowed for quite some time by the imperial traditions of Tendai and Shingon. This is not to say that Zen would not have found as deep a place in the heart of Japan, but its influence on history, art and literature might have been delayed for years.

(To be continued. The author's bibliography will be posted with the conclusion.)