“Made in Chinatown” Finding Love, Culture and Heritage 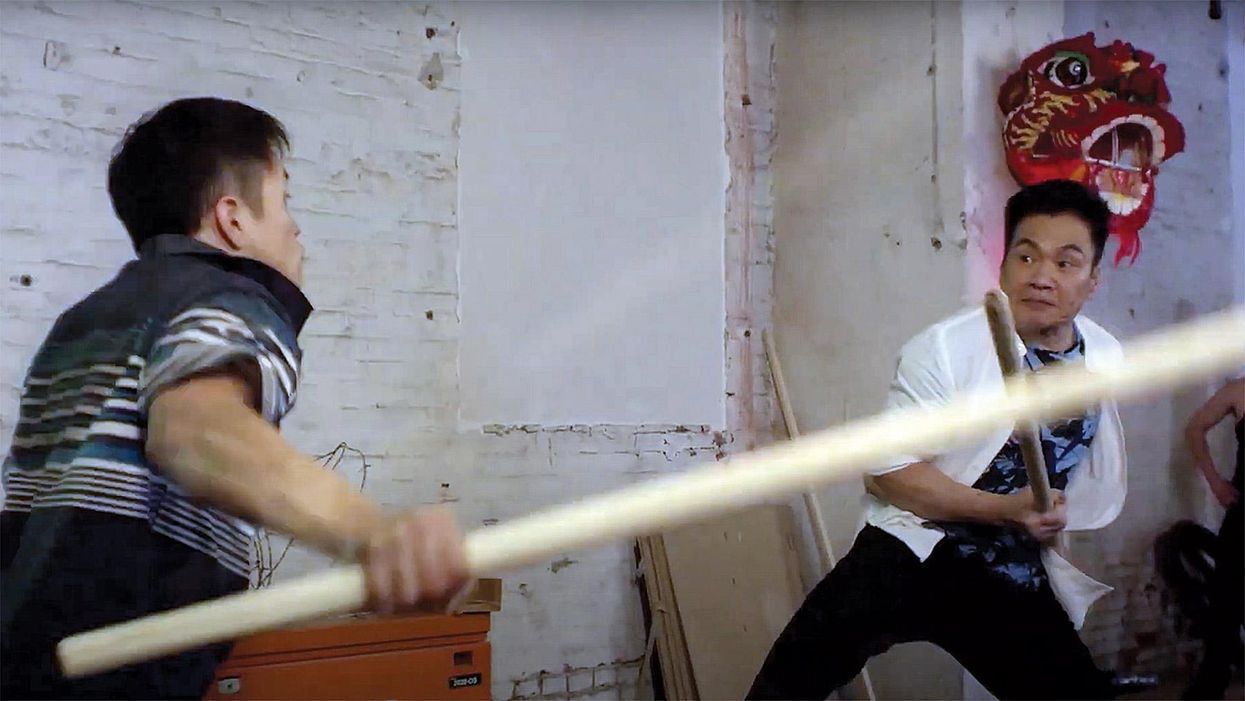 Question: What's crazier than sending your horse to audition for The Godfather, wackier than two parrots saying, "Are you talking to me?" and wilder than the Scarecrow introducing Toto to the Wizard of Oz by stating, "Say hello to my little friend," and thereafter referring to himself as the Scar-crow?

Answer: Jay Kwon starring as wishful wise guy Vinny Chow, a man who walks the fine Canal Street line between Chinatown Triads and Little Italy mobsters to win over an Italian girl in the insanely absurd comedy Made in Chinatown.

Co-directed by Robert Samuels, Made in Chinatown, like any bizarre-yet-engaging satire, is smartly cheeky — and perhaps wittily upsetting and prohibitively challenging for some. Many visuals and lines of dialogue are blatantly or wryly armed with backdoor humor, inside jokes and in-your-face puns, and they're all balanced or unbalanced by guilt, gaslighting and the occasional attempt to toss your emotions under the bus.

As a lad, Samuels was tossed out of public school in third grade and Catholic school in fourth. Consequently, he was sent to a military academy to finish his primary education. "At 10, my aunt took me to see Lo Lieh in Five Fingers of Death," Samuels recalled. "At that moment, I knew I wanted to learn kung fu, do kung fu movies and work with all the Shaw Brothers guys."

I [soon] met Maurice Tunstall in Philadelphia. He said doing Bruce Lee imitations wasn't real kung fu and offered to teach me hung gar. As I started watching kung fu films, I realized I was doing kung fu and have never stopped.

"When Samuels came of age, he pursued his film passion by getting a job at US Airways so he could fly back and forth to Hong Kong for free. The gamble paid off. He hooked up with hung gar specialist Chiu Chi Ling, who became his manager. Samuels' first booked film, appropriately titled The Gambling Ghost, was released in 1991. It starred the great Sammo Hung and …"A dream come true — Lo Lieh was in the film," Samuels exclaimed.

The American then faced the biggest decision of his life. The movie finished a week ahead of schedule, and Samuels was owed $5,000. The producers asked him to forgo his fee. Samuels insisted on talking to Hung. "We weren't close," Samuels recalled, "yet I told him I'd forfeit the money on one condition: I [could] work with him again in the future. He said, 'You're willing to forfeit $5,000 to work with me again?' I said, 'In a heartbeat.' He replied, 'Deal.'"

Samuels moved into Hung's house. That connection enabled him to meet many Shaw Brothers stars, some of whom became mentors and "uncles." Through his work, Samuels went on to become the first African-American inducted into Hong Kong's Stuntman Association and the first recipient of the Jim Kelly Lifetime Achievement Award.

What could top all that? Making his feature-film directorial debut with Made in Chinatown.

Although it was shot in 2018, the film is being released now, which just happens to be an intense sociocultural period that coincides with a recent spate of hate crimes against Asians and Asian-Americans. I was eager to ask Samuels if he had any reservations about directing a film that, in some folks' eyes, might be interpreted as perpetuating Asian-American stereotypes and cinematic tropes."

It was a balancing act and had to have jokes delivered in the way they're supposed to be," he said. "Mark Wiley and I did script revamps in 2018. Since it plays on stereotypes, it's a cautious tale — you have to walk carefully. We painstakingly detailed the humor and made sure it played on stereotypes [without using] overtly disrespectful comments."

America is currently in difficult times with ethnicities, BLM, hate crimes and turmoil experienced up to January 6. The film is timely [and] sensitive, but it has a more important meaning: It promotes unity and forces [people] to look at each other in a certain way and laugh. Nothing wrong with laughing — it's what we're lacking in America right now."

At a sold-out showing in Newark, New Jersey, with a sizable Asian turnout, the producers were concerned about what kind of feedback there would be, Samuels said. "Forty Asians thanked me, saying, 'The film presented us how we'd like to be presented.' We now knew we had achieved the right balance with the subject matter. It meant more to me than anything. They didn't feel disrespected and got the jokes, and the film treated the community with respect and dignity. We had a blessing from the Chinese community."

As I mentioned, the star of Made in Chinatown is Jay Kwon. Whenever I watch a newcomer like him, I look for three things: Does the actor make me believe he's really going through what his character is going through physically, mentally and emotionally? That's a tall order in this film, but Kwon pulls it off.He portrays Vinny Chow with vulnerability, and that surprised me. Many martial arts actors can't deliver such performances because all they can do is fight. Kwon sold me on all three fronts — and he can fight.

He said that as a kid, he was inspired to do martial arts after watching Robin Shou's Mortal Kombat (1995). "I was like, I want to do that," he recalled. "I began with taekwondo, then kickboxing, jujitsu, Filipino arts and Chinese kung fu. I liked Jackie Chan and Jet Li's American films, yet I wanted to do movies after researching their old kung fu films."

Growing up, I had an identity crisis. My dad said I was an American-Korean, and I identified myself as more American with a partial Korean upbringing. Yet I love martial arts and found myself doing that. Taekwondo helped me find my heritage. As a whole, martial arts taught me patience and dedication, to work hard and to have an indomitable spirit."

Kwon said he was attracted to the Vinny Chow role because he liked the challenge of playing an insecure character, noting that he didn't grow up around any Italians and thus watched The Godfather and similar films to practice his accent. When I told him his jaw line matched Marlon Brando's and Robert DeNiro's, he laughed."

It's funny you bring that up," Kwon said. "After I saw Godfather, I thought, Oh, I do that already. When I played football in high school, I made funny sounds, and my teammates called me the bulldog because I did this growl. It was perfect. I knew how to use the face. For the accent, I did it as I went along."

Made in Chinatown includes some martial arts royalty. The co-director is James Lew, an Emmy Award–winning fight director who's trained in kung fu, jeet kune do, taekwondo, hapkido and traditional weaponry. He's worked in showbiz since the 1970s. Lew's choreography in the film is a mix of typical Shaw Brothers camerawork designed to accentuate specialized skills and rapid-fire melees of the kind that were popular in Hong Kong in the 1980s, all shot mostly with medium angles and often with a one-take-move-on-to-the-next-shot mentality.

And then there's perennial Shaw Brothers star Lo Meng, who plays Hung Phat. Among his notable films are Five Deadly Venoms (1978) and The Kid With the Golden Arm (1979). There's also the ubiquitous Chiu Chi Ling, who appeared in Snake in the Eagle's Shadow (1978) and Kung Fu Hustle (2004).Throughout the film, Kwon's comedic timing is superb, including during the finale when he pulls an amazing rabbit out of his magic hat, which blew me away. Everything is on the line for Vinny Chow — the one he loves, the culture he belongs to and the anger he feels from the unfairness of life — and it all erupts within a single facial expression that he wears in front of a Triad and mobster gauntlet. It's a face without fear, and Chow is about to make them an offer they can't refuse. Ciao!