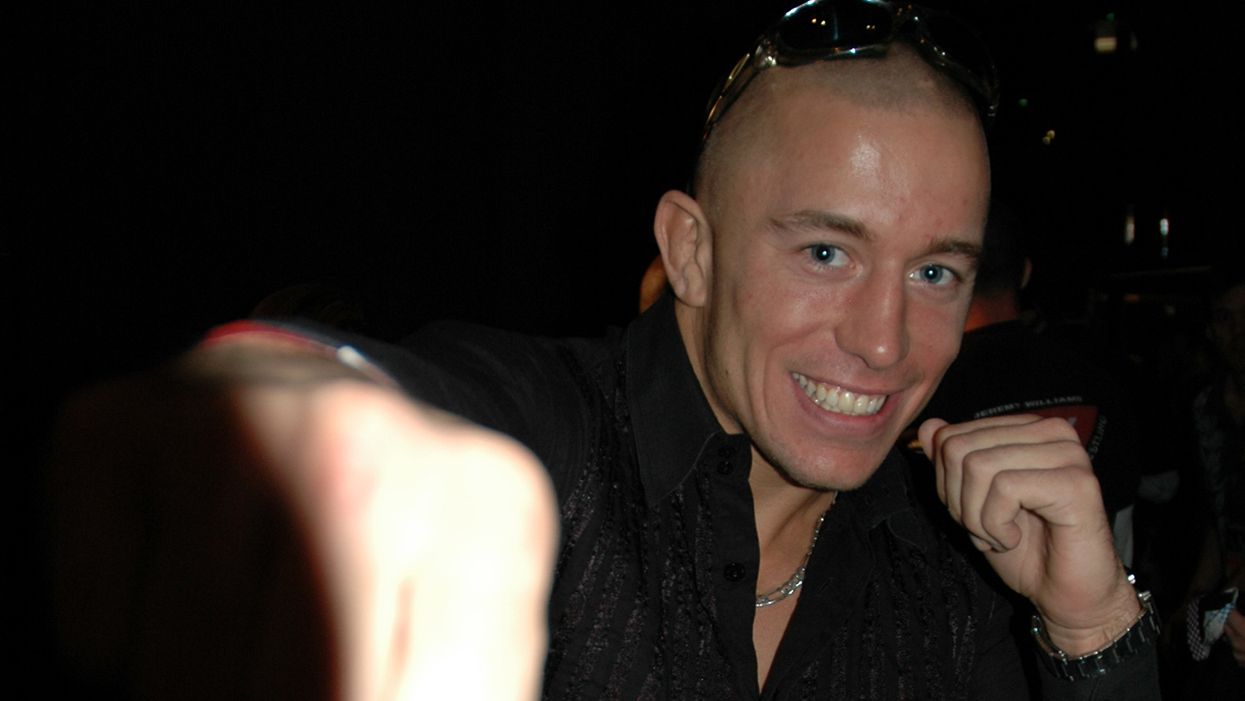 One of Black Belt magazine's top MMA analysts (he wrote an entire book on the subject) breaks down the two-time welterweight champ's approach to fighting and training.

Even if you're not a fan of the Ultimate Fighting Championship, by now you've probably heard about the ease with which Georges St-Pierre systematically dismantled opponents such as B.J. Penn at the UFC 94. That victory was just part of a five-bout winning streak for the recently retired Canadian karateka and MMA fighter. Georges St-Pierre won the UFC welterweight championship twice — once in 2006 and again in 2008, as well as the interim title in 2007. In December 2013, St-Pierre vacated the title and decided to take some time off from the sport, though he left the door open for a return. In case you don't have enough time to dissect his whole record and go through each fight, we thought we'd give you a breakdown of how he does it and how you can apply the lessons the champ has learned the hard way.

Explanation: That includes balance and an abundance of fast-twitch muscle fibers, Lito Angeles says. “You see his superior balance in the way he's able to thwart takedowns. In his fight with Josh Koscheck, Koscheck tried to take him down. Georges St-Pierre did a cat-like movement and managed to land on his feet. It was spectacular. No matter who he's fighting, he's always in a good position to do what he wants, whether he's standing, in a clinch, doing a takedown, neutralizing a takedown or getting to side control. “Fast-twitch muscle fibers give him the capacity for explosive movements."

Action: “For the most part, you're born with a certain amount of fast-twitch muscle fibers, but you can enhance what you have to some degree," Lito Angeles says. “It's the same for balance: You're born with it, but it can be honed through hard training in the various disciplines that cover stand-up fighting, the clinch and the ground."

Observation: “GSP has a work ethic that's second to none," Lito Angeles says. “He trains hard in a number of fighting disciplines with world-class people, and he doesn't mind if he gets his butt kicked. Then he takes techniques from those disciplines and fits them into the MMA framework."

Action: Don't limit your training partners to just people you can beat. Spar with students who have a good chance of beating you, and when they do, learn from them. It's the only way to get better.

Explanation: “He trains in boxing, but he doesn't use conventional boxing in the octagon," Lito Angeles says. “He modifies it so his stance is a little wider, which enables him to counter takedowns better. And his distancing is a little farther away, which means his opponent doesn't know if he's going to punch or kick."

Explanation: “He has great kicking skills because of his karate background," Lito Angeles says. “His lead-leg round kick shows a kyokushin and muay Thai influence, but it's not pure kyokushin or pure muay Thai. He makes his kicks fast and snappy. He doesn't try to put full power into each one and blast his opponent to death. He uses mostly round kicks, often delivered from the lead leg. They're very effective even though they were considered worthless in the early days of MMA. In his second fight with Matt Hughes, he TKO'd him with a lead-leg kick."

Action: Study a hard-core kicking art like kyokushin or muay Thai, but remember that the techniques may not work unless you adapt them to MMA. “You have to be able to seamlessly integrate the kicks with punches, takedowns and takedown defense," Lito Angeles says.

Explanation: “He uses them mostly on the ground, where he blends them with punches," Lito Angeles says. “You don't really see him use knees and elbows while he's standing or in the clinch. He's not much of a clinch fighter; he's more likely to peck at you with strikes or just take you down."

Action: Even though Georges St-Pierre is sufficiently skilled to avoid having to fight in the clinch, you may not be so fortunate. Work on your clinch-fighting skills in case you're trapped in that position, Lito Angeles says. Muay Thai is a great place to start.

Explanation: “He trains with a world-class team in Canada and goes to Brazil to work out with the Gracie Barra team. When he's on the ground, he doesn't mind being in his opponent's guard — he'll just pound him. That's when he uses the elbows."

Action: Learn Brazilian jiu-jitsu now, and if you want to compete in MMA forum, train without a gi.

Observation: Georges St-Pierre has equipped himself with the submissions, escapes and reversals he needs to fight and win on the ground.

Explanation: “However, he hasn't really had to use them," Lito Angeles says. “So far, he's always been dominant on the ground. He's the one who's usually on top. But he did use an armbar to submit Hughes in their third fight."

Action: When it comes to grappling techniques, Lito Angeles says, you should focus on the basics — the armbar, kimura, rear-naked choke and triangle. “Forget about having a trick that no one else has seen. All the holds that are effective are being used. Why do fighters get caught in them? Because they work. There are more tricks when a gi is worn because you have more handles, but MMA is different."

Observation: Georges St-Pierre is a fantastic wrestler — in fact, he trains with the Canadian Olympic Team.

Action: “Pick a base art according to what you gravitate to, but know that wrestling is generally regarded as the best base because of its training methodologies," Lito Angeles says. “In addition to developing great balance and teaching you how to execute and counter takedowns, wrestling is easily mixed with techniques from other arts. Most MMA fighters who come from wrestling are able to pick up the necessary striking skills easily. “Unfortunately, there are few wrestling schools for adults. Your best option is to go to a local high school, junior college or university and speak with the wrestling coach. He may not let you practice, but you might be able to hook up with someone with the same interests."

Observation: Georges St-Pierre is a master of the mental game.

Explanation: “He's proved that he's mentally strong," Lito Angeles says. “Even though he lost to Matt Serra and Matt Hughes, he had a winning streak before and after. Either loss could have broken a lesser fighter, but Georges St-Pierre used them to improve himself."

Action: Part of mental strength comes from the environment you were raised in, Lito Angeles says. “But it definitely can be developed — to a greater extent than physical attributes, even. The best way to do that is through rigorous physical preparation. When I interviewed Georges St-Pierre, I asked him how he strengthens himself before a fight. He said, 'It's all in the preparation.' It's like studying hard before a test."

Order the book written by the martial artist featured in this post!

Observation: Georges St-Pierre uses visualization to program himself for success.

Explanation: “He pumps himself up with positive thoughts, seeing himself winning and putting himself in difficult situations and getting out of them," Lito Angeles says.

Action: You can create the same kinds of virtual fights and envision yourself overcoming the odds. “Just accept that you're a human being who can be caught at any time," Lito Angeles says. “If that happens, don't let it set you back."

How GSP Analyzes His Opponent's Strategies

Explanation: He studies his opponents, Lito Angeles says. “He tries to figure out his opponent's strengths and use them against him. Against Koscheck, Georges St-Pierre out-wrestled him. Beating a guy at his best thing can get into his brain."

Action: If you compete at a level that allows you to know who your next opponent will be, study the way he fights, Lito Angeles says. Against an unknown adversary on the street, think pre-emption. “You have to read the pre-fight indicators and attack first," Lito Angeles says. “You should always assume that he's as good or better than you, that he's carrying a weapon and that he has friends. Strike first. This is how a lesser skilled person can beat a more skilled person. It's where MMA and self-defense part ways. Sport fighting is technically more difficult than street fighting, but street fighting has greater potential consequences.

Fighting two or more attackers, even if they are unarmed, is a "worst case scenario." However, as with any conflict, there are rules that can help you survive it. Here are six of them that you must commit to memory.