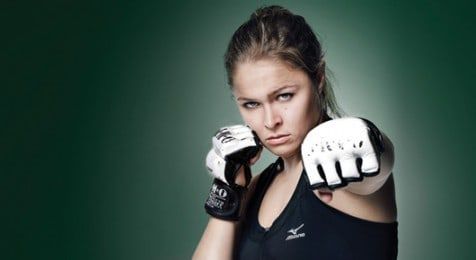 The UFC women's bantamweight champion and former Olympic judoka demonstrates one of her coveted judo moves for us in this exclusive judo training video!

In this exclusive martial arts video, Ronda Rousey demonstrates what she calls the "Juji Squish Roll" judo technique. Ronda Rousey was the first female judoka to win a medal at the World Championships since 1995 and was one of the youngest medalists at the 2007 World Judo Championships. At 17, Ronda Rousey qualified for her first Olympic team, becoming the youngest judo player in the entire Olympic Games. Learn more about Ronda Rousey at her Team USA judo profile page

Although many Olympic judo players come from "judo families," Ronda Rousey's family, in fact, is one of the most pedigreed. Ronda Rousey's mother, AnnMaria R. DeMars, Ph.D., was the first American to win the World Judo Championships. At age 11, Ronda Rousey persuaded her mother to let her pursue judo. At first, AnnMaria R. DeMars was hesitant in allowing her daughter to try judo, but Ronda Rousey exceeded all expectations and has risen through the ranks in an unprecedented fashion.

After claiming the top finish for the U.S. women at the Olympic Games, Ronda Rousey became only the second U.S. athlete to win a gold medal at the 2004 World Junior Judo Championships in Budapest, Hungary.

In April 2006, Ronda Rousey became the first U.S. female athlete in nearly 10 years to win an A-Level event, going 5-0 to claim gold at the Birmingham World Cup in Great Britain. Later that year, the then-19-year-old won the bronze medal at the Junior World Championships, becoming the first U.S. athlete to win two medals at the Junior World Championships.

On March 27, 2011, Ronda Rousey made her mixed martial arts debut at a King of the Cage event at the Braemar Country Club in Tarzana, California. Her first MMA opponent was Brazilian Ediane "India" Gomes, a 6-1-0 favorite going in. Ronda Rousey submitted her at the 25-second mark of the first round!

According to Ronda Rousey's Wikipedia page, her MMA record stands at 9-0, with her most-recent win being at UFC 170 against Sara McMann by TKO. Ronda Rousey is currently the UFC women's bantamweight champion. Learn more about Ronda Rousey at her official website, rondamma.com.

Winning on the Ground: Training and Techniques for Judo and MMA Fighters (book) — Dr. AnnMaria De Mars (1984 world judo champion) and James Pedro Sr. (coach of international judo medalists) present a variety of techniques developed over the years. Their coaching has helped such winners in the worlds of judo and mixed martial arts as Ronda Rousey (De Mars' daughter) and Kayla Harrison take home medals at the highest levels of competition.