Learn How to Fight Different-Size Opponents from Benny The Jet Urquidez! 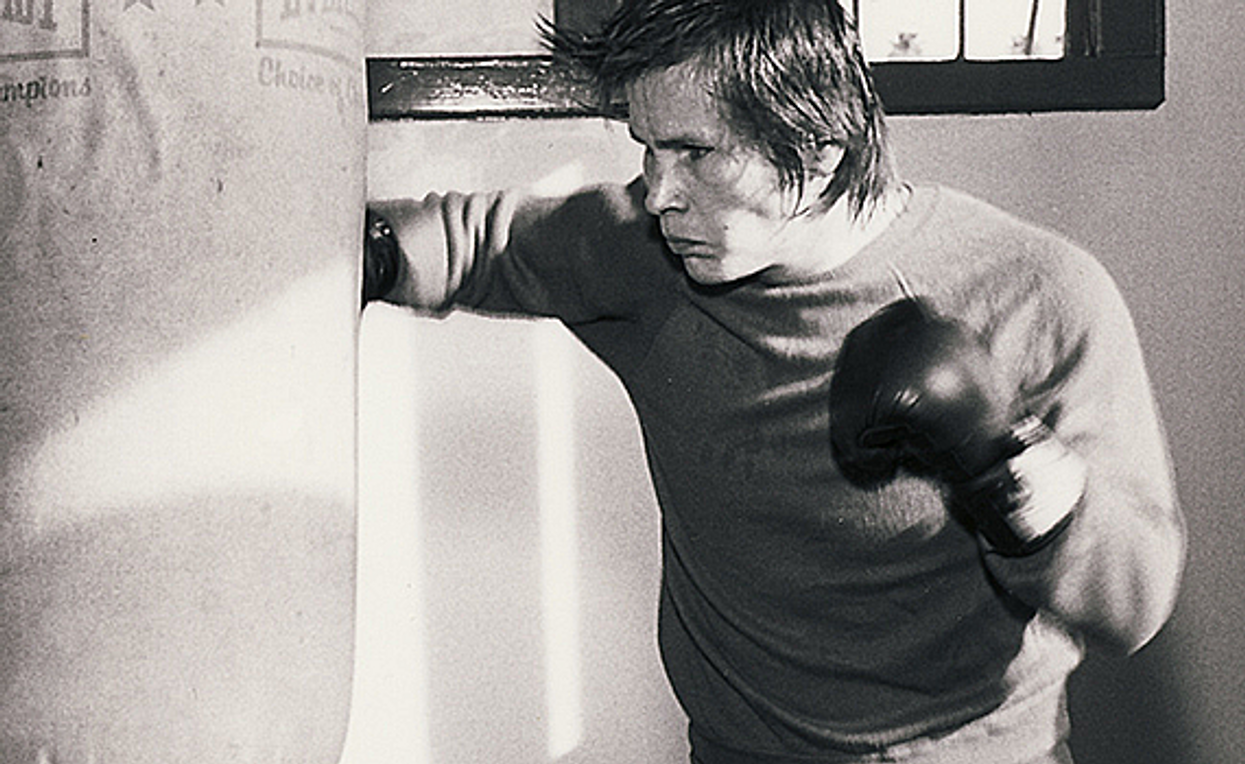 Benny Urquidez was kickboxing's most fearless gladiator. With his incredible speed, power and energy, he could go to any country on earth, fight anybody he was paired up with according to their rules — and beat the living daylights out of them. In front of sell-out crowds, Benny Urquidez, in true terminator fashion, would blast opponent after opponent into oblivion. What is so amazing is that he did this 58 times without losing. It's not surprising that he was named Black Belt's 1978 Competitor of the Year.

Benny “The Jet" Urquidez's arsenal of techniques was something to write home about, and his physical conditioning was second to none. His regimen included working all his techniques in addition to a host of back-breaking drills. For example, he would do 15 three-minute rounds of offensive and defensive moves, going full speed with only 30-second rest periods.

Urquidez would fight on the inside or on the outside, and he would attack or defend off the triangle. He would use the jab, hook, cross, uppercut and overhand punches, along with the spinning backfist. He would fight left-side forward, and it took years for the opposition to realize that he was naturally left-handed. He could fight southpaw equally well and would sometimes switch from side to side just to confuse his opponent.

Benny Urquidez was as good at throwing lead-leg kicks as he was at executing power kicks off his rear leg. He had the nastiest spinning back kick of any professional kickboxer, and he could successfully use the jump spinning back kick. “I was known for the spinning back kick because very few people liked to do it," Urquidez says. “But I also tore people up with [ball-of-the-foot] kicks, roundhouse kicks, side kicks, ax kicks and wheel kicks. What sticks out in people's minds is what nobody else does."

All these techniques, along with muay Thai-style leg whips and elbow and knee strikes, made it impossible for Benny Urquidez's opponents to plan an effective strategy against him. They tried, but not a single one could do it.

With 49 knockouts and world-championship titles in the lightweight, super-lightweight and welterweight divisions, Benny Urquidez proved he could use that strategy to become the best of the best. Along the way, he had convincing victories over opponents of all sizes. The following are some more of his secrets.

An opponent who is shorter than you has a mission: He wants to get inside your reach, Benny Urquidez says. He will try to get in and do some damage, then retreat without getting hit. Because he will probably rely on speed and move around a lot, he will need the whole ring — or at least a good portion of it — to be effective. His biggest advantage is that when you start running from him and he gets you cornered, you are put on the defensive. That means you have fewer options and fewer chances to use your longer reach.

To defeat a shorter opponent, Urquidez advises you to start by taking away his best weapons. When he tries to get inside and throw a jab, counter it. If he throws a cross, counter that. If he throws a jab-cross combination, counter both punches. And make sure your counters always carry a heavy impact. Your opponent will become gun-shy because every time he throws a punch, he gets hit with a hard counter. This will take away his confidence and his best weapons, Urquidez says.

The next step is to serve the opponent with an eviction notice, Benny Urquidez says. “It says, 'The center of the ring belongs to me.'" The opponent must stay out of the center or go toe-to-toe with you. Since he has already had a taste of your blows, he will probably start to run. Running may work for a while, but eventually he will find himself trapped in a corner. When that happens, capitalize on his mistakes. If he tries to dart inside, pound him with hooks, crosses and body welds. If he tries to slip by the ropes, hit him with punishing kicks and follow-up punches.

If he stays where he is, wait until he makes a major mistake or until you catch him “gazing" (a term used by fighters to describe an opponent who is looking at them but whose mind is somewhere else), then overwhelm him with kicks and punches. This can be a perfect chance for you to blast him with a jump spinning back kick.

Fighting an opponent who is approximately the same size can cause problems for you because he may have equal speed, power and reach. He can hit you from the same distance as you can hit him, and his lead-hand and rear-hand punches will have enough pop to cause a knockout or a knockdown. This makes it more difficult for you to control the center of the ring because it's harder for you to out-leverage him and counter his punches when standing toe-to-toe. And when any martial artist cannot fight from the center of the ring, he cannot use all his weapons, Benny Urquidez says.

Another challenge comes when the “same-size" opponent is a bit taller than you. Such a situation gives him the advantage of being able to hit you with punches or kicks from a greater distance than you can hit him. And instead of kicks coming straight at you or from the side, you now have to deal with ax kicks or crescent kicks coming from above.

“When fighting someone who has the potential to knock you out, you don't want to be a checker-player, or someone who will take two hits to get one," Benny Urquidez says. “Only fighters who don't know any better will stay there and tie shoelaces with their opponent and take a blow for a blow. It's foolish to stand in front of someone and fight his energy when you can easily guide his energy and move it to where you want it to be."

To set up a same-size opponent, Urquidez advises you to redirect his energy using footwork and movement. Try to surprise him with a ball-of-the-foot kick or power roundhouse kick when he leans forward on his front leg. If you manage to get inside, hit him with a flurry of crosses and hooks.

Another tactic Benny Urquidez advocates involves moving in and out, and in and out, and in and out. It is what he calls the “gapping strategy," which means staying just out of range of your opponent's punch or kick while you try to draw him into a trap. As he follows you out (back) with a jab, hook or cross, move just far enough away so you can “gap" the technique and counter with your own barrage of heavy-duty kicks. If you get him to commit to a kicking technique — whether it is a ball-of-the-foot kick, roundhouse kick or side kick — slip the kick by moving to the inside at a 45-degree angle and use your leverage to start banging him with hard punches.

The most obvious danger of fighting a larger opponent is his power. Standing toe-to-toe and slugging it out is out of the question. The reach factor is also a disadvantage that must be overcome strategically. A larger opponent can hit you from a much greater distance than you can hit him — and with more power. He will also have sufficient size to shake off some of your punches and kicks. He will put a lot of effort into keeping you out of the center of the ring so he can trap you. This will allow him to stay on the outside and pick away at you, catch you sleeping and blast you with a punch or kick — then run over you like a steamroller.

To beat such an opponent, Urquidez advises you to do a lot of baiting, darting in and out, moving from side to side and off at different angles, all the while using footwork and movement to get him to commit. If he launches a kick, move backward then forward at a very short angle to slip the attack. You can slip it because your larger opponent is slower than you are. You are now on the inside, where you can do what you like best — blast away with hooks, crosses and body welds. Or you can double him over with ball-of-the-foot kicks, roundhouse kicks or side kicks.

You must possess three attributes to consistently beat a larger opponent, Benny Urquidez says. Your conditioning has to be superb, you have to be lightning-fast, and you must have at least one power kick and one or two high-impact punches, which you've got to be able to deliver when the opportunity arises.

Larger fighters can usually deal with shorter opponents who are on the run or trying to close the gap and get inside. But if you follow Urquidez's plan, things will go a little differently. Use his gapping tactic to get your opponent to lean forward on his front leg so he can use a hand technique. As soon as you recognize that he feels comfortable leaning in, chop the front leg. Once you chop it and the muscles start knotting up, there is nothing he can do; you now own him. He can no longer kick effectively because he is unable to stand on his leg, and he is not able to punch because he cannot lean on his front leg. Even if he does punch, it will feel more like a push.

“Somebody who is big can feel threatened by a smaller person's power punches on the inside," Urquidez says. “He likes to stay on the outside because his power is from the outside. If the velocity [of his techniques] gets to you, the impact will do a lot of damage to you, so he feels safe on the outside.

“So with a really big opponent, I like to jump in like a leach sucking on his blood. I'll be right there on top of him where all he can do is try to get me away. He can't kick me because I am in his face. And when he punches — since I won't give him the room to punch me normally — the punches will have to come from the outside in, and there will be no power. As I smother my opponent's hands, I hit him many times. When I chop his front leg, I hit him even more. This puts my opponent on the run, something that he is not used to doing when he's fighting someone smaller. When he is on the run, he loses control of the center of the ring, and I have taken away some of his best weapons. It is only a matter of time; the tree is going to fall."