Larry Hartsell on Jeet Kune Do, Grappling and Open-Mindedness (Part 2) 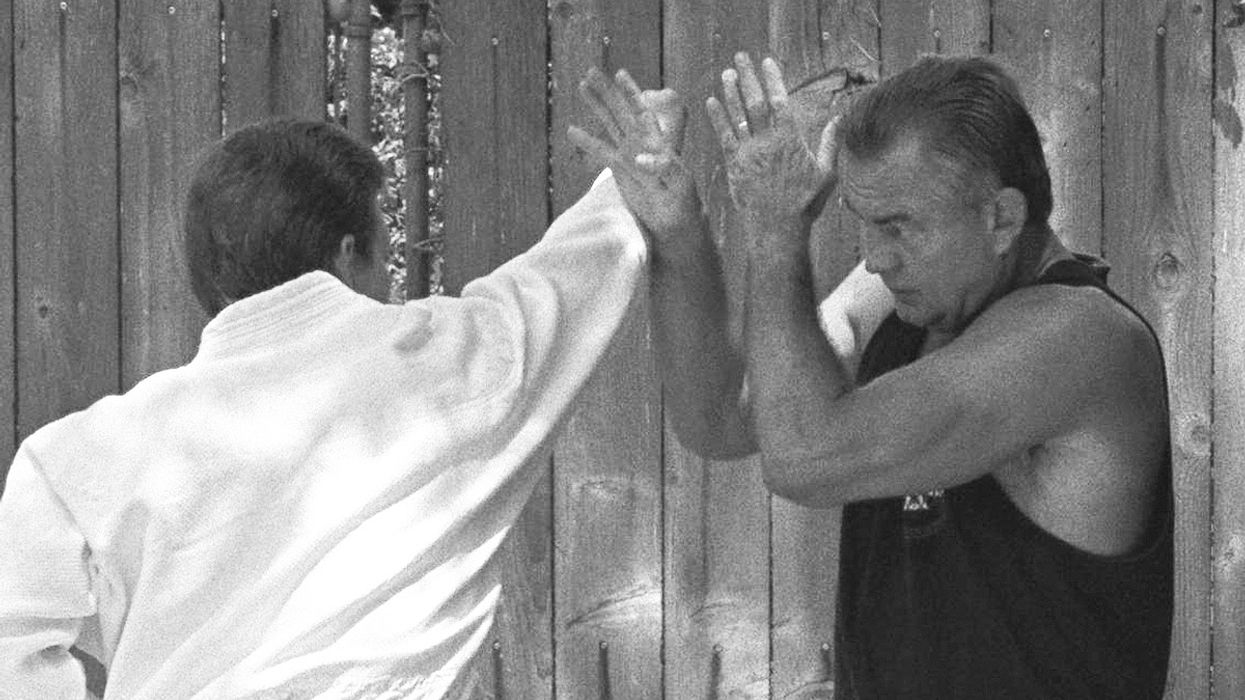 In Part 2 of this exclusive interview, Larry Hartsell, an expert in Bruce Lee's jeet kune do and various styles of grappling, talks about how the two forms of fighting function together in self-defense.

Some people say that if your opponent wants to grapple, you will end up grappling. You can avoid grappling if both of you want to keep your distance; but if either person wants to come in, the other person has no choice.

Exactly. If there's going to be a fight, somebody's got to come in at you — whether it's in kicking, punching or grappling range.

So kicking, punching and trapping ranges are used mainly to get into grappling range?

Would you ever stay out of grappling range on purpose and not go in?

Yes. If a guy is physically stronger or moving quickly, I would probably stay back and let him come to me. My defense would be my offense.

But your ultimate goal in self-defense would still be to grapple?

To end a street fight, use whatever works — a left hook, an uppercut, maybe a right cross. If he comes in, maybe a figure-4 face lock or whatever's there.

Once you're in, would you ever pull back out and continue striking?

No. There's a saying in wing chun that I like: “Once you have him, you keep him."

How do you know when to close the distance to grapple?

Know something about each and specialize in one or two?

Yes. Use what you do best to counter what he has.

Is entering into trapping range and grappling range what you do best?

Yes, getting to the inside range.

How do you generally finish a fight after going to the ground?

I just go into a submission hold — kata gatame or yoko shiho gatame, then maybe into an arm lock or neck crank.

When you face an opponent in a self-defense situation, do you plan on getting into grappling range, or do you just work in whatever range he takes you to?

Your opponent's move is your move. Go with the flow. You can initiate the first move or you can counter his move. It can be done two ways; I do both.

How well does grappling mix with arts that focus on punching and kicking?

Every martial art should have some form of grappling. I have worked as a doorman and bouncer in some of the worst bars in Charlotte, North Carolina, and most fights I saw ended up on the ground. One guy was either in the mount position beating the hell out of the other guy or grabbing [whatever he could]. Judging from what I've seen and been involved in, you have only one or two punches. If they don't knock out the other guy — or at least hurt or stagger him — you end up in clinching range.

For grappling self-defense, how important is ground work vs. throwing? Do you need throwing techniques, or is throwing something you can avoid?

There are different types of throws for competition and self-defense. If you're fighting on pavement, you don't want to throw where you're going to injure yourself. But there are many different ways to take a person to the ground: single-leg and double-leg takedowns, body tackles and go-behinds.

Those are ways to get to the ground without using a traditional judo throw?

Do the same things that make grappling so effective in competitions like the Ultimate Fighting Championship make it effective on the street?

Definitely. You can throw a guy, tie him up or go into a standing lock. Locking, grappling and takedowns — it's all a blend. But you have to realize that if you're fighting two or three people on the street, you might not want to take it to the ground because the other guys might start kicking you in the head. You have to be effective in standing grappling to turn your opponent and get behind him, then use him as a shield.

Some people say grappling is best for self-defense because you can win a fight without hurting your attacker.

Exactly. You can go into a time hold, control hold or submission. That's why I like it.

Is the best way to improve — as a striker and a grappler — to acquire as many skills as you can from different styles?

I think so. It reminds me of a saying: “There are many paths to the top of the mountain, but my path may not be your path." We're all built differently; we all have different instincts. That's what Bruce Lee believed. You have to pick your own path. Some are short, and some are long. I always encourage students to attend any seminars they want. When it comes to knowledge, you owe allegiance only to yourself.