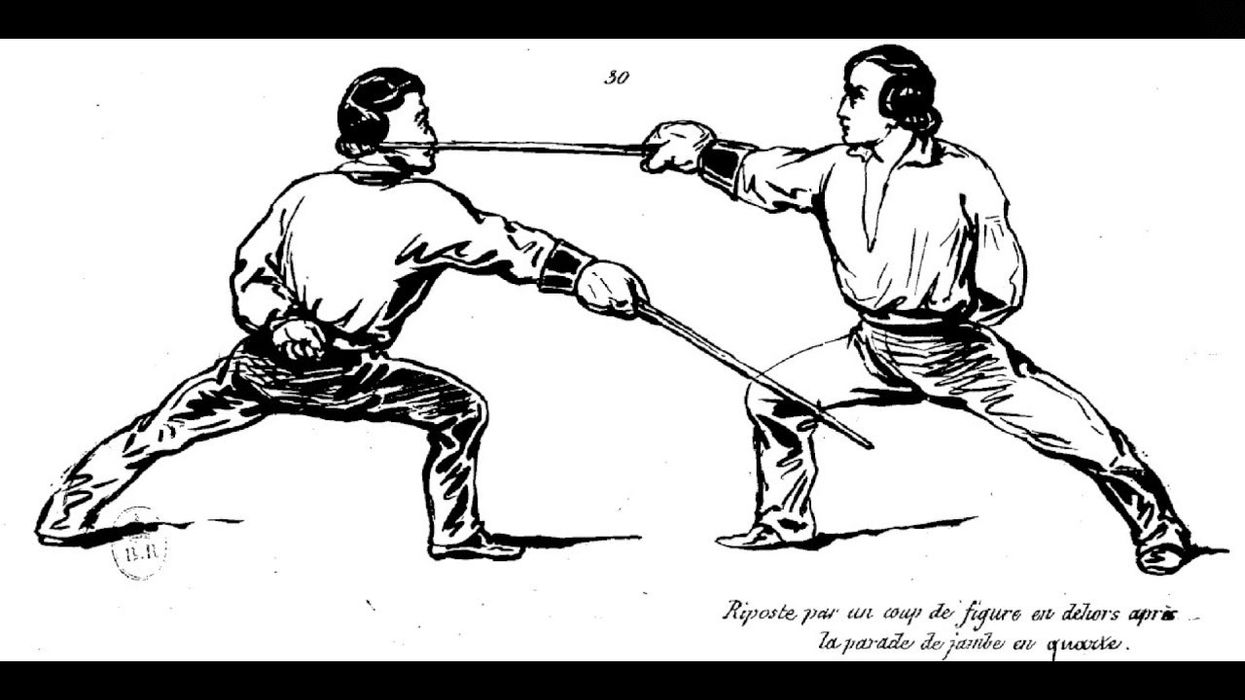 The French developed the walking stick into a formidable self-defense tool that became known as la canne. Learn how it was adopted into traditional savate training in the 1800s and has remained part of the kicking art ever since!

By the 19th century, the walking stick had become the hallmark of distinction, authority and strength. For the gentlemen of the era, it was not only an indispensable fashion accessory but also a source of confidence, security and nonverbal deterrence on the streets of Europe.

In its various designs and configurations, the walking stick was also valued at home, where it served as an objet d'art and an effective weapon against invaders.

The French developed the walking stick into a formidable self-defense tool that became known as la canne. Adopted into the traditional savate training halls of the 1800s, it's remained by the side of the kicking art for more than 200 years.

The Birth of La Canne

Pierre Vigny was one of the most innovative masters of la canne. Born in France in 1869, he began training in savate, English boxing and fencing at a young age. During his teenage years, he often ventured from one academy to another, learning new martial arts techniques and testing his skills against anyone who'd pick up a sword, stick or pair of boxing gloves.

In 1886 he joined the army, where he served as the fencing master for the second regiment of the French artillery at Grenoble. After leaving the military in 1889, he moved to Geneva and opened a combat academy. During this period, he devoted several years to the perfection of his own method of la canne.

Pierre Vigny devised a system that could be described as a mixture of several indigenous European self-defense methods. Many of the passes, thrusts and wards resembled fighting techniques from German swordsmanship, and a collection of the foot skills were borrowed from savate and French boxing.

Upon receiving an offer from Edward W. Barton-Wright to assume the position of chief instructor at the Bartitsu School of Self-Defence, Pierre Vigny relocated to England in the late 1890s and introduced la canne and savate to the British. During his time there, he met and trained with two celebrated jujitsu instructors: Yukio Tani and S.K. Uyenishi.

From them, he acquired new martial arts techniques for his already efficient repertoire of self-defense skills, after which he formulated his method of personal combat, which included moves from wrestling, savate, jujitsu and sword dueling. The addition of the new techniques was deemed necessary because of the rise of hooliganism throughout England.

Pierre Vigny's skill as a fighter and teacher attracted the attention of both the working class and the aristocracy. He served as a coach at the London Boxing Club and instructed at Aldershot Military School. Seeking better business opportunities, he moved to London, where he opened a school in 1903 under the patronage of Grand Duke Michael of Russia and became director and manager of the New School of Self-Defence and Fencing Academy.

Interestingly, his wife also taught there, offering ladies instruction in the use of the parasol and the steel-spiked umbrella.

The syllabus at the school catered to students who were interested in a variety of fighting arts. Even though he conducted classes in the fencing foil, sword, savate and self-defense from morning to night, la canne remained Pierre Vigny's pet project. He taught courses that lasted 12 weeks, a length of time he believed was sufficient to give the average person the ability to handle almost any emergency.

Shunning the lighter assault canes that were popular in the academic training halls — Pierre Vigny referred to them as “chopsticks"—he believed that a true walking stick should be rigid and sturdy. Because of his dislike for the less-functional models, he had one produced to his own specifications.

Termed the “Vigny self-defense stick," it was made from a medium-weight Malacca cane with a metal knob mounted on the end. The heavy ball served as the point of percussion, thus adding instant knockout effectiveness to the weapon.

By 1912 London held little interest for Pierre Vigny, so he returned to Geneva, where he managed the Academy of Sports and Defence for a number of years. He put the finishing touches on what is arguably the most complete and effective stick-fighting system ever devised. Several police, military and martial arts academies adopted his syllabus.

During the 1920s, Superintendent Henry G. Lang, an English officer of the Indian police, was required to search for a less-than-lethal equalizer to oppose the commonly carried lathi. While on leave, he traveled to Europe to learn the Vigny system, and upon his return to India, Henry G. Lang produced a syllabus that he documented in the now-classic book The “Walking Stick" Method of Self-Defence.

In 1941 Henry G. Lang's manual was translated into Hebrew, and for a time, it was adopted into the kapap curriculum, later to be included as part of the training undertaken by an Israeli spec-ops unit known as Palmach. It's estimated that up to 50,000 Israelis received training in the walking-stick method.

Pierre Vigny's influence also reached the United States through jujitsu and fencing instructor Charles Yerkow. By the early 1940s, Charles Yerkow had written a series of books titled Modern Judo: The Complete Ju-Jutsu Library, which served as a supplemental manual for American hand-to-hand combat teams. The section on stick play is based on Henry G. Lang's “Walking Stick" Method.

Today, practitioners of Vigny la canne are privileged to be able to tap into a system that's time tested, versatile and still very workable on the street. Anyone looking for a backup to his or her unarmed skills would do well to consider it, for it's as relevant now as it was 100 years ago.

About the Author: Craig Gemeiner is the founder of the Gemeiner Academy of European Combat Arts in Queensland, Australia. He serves as president of and technical director for the Australian Savate Federation Inc.

Be a Sheepdog, Not a Sheep