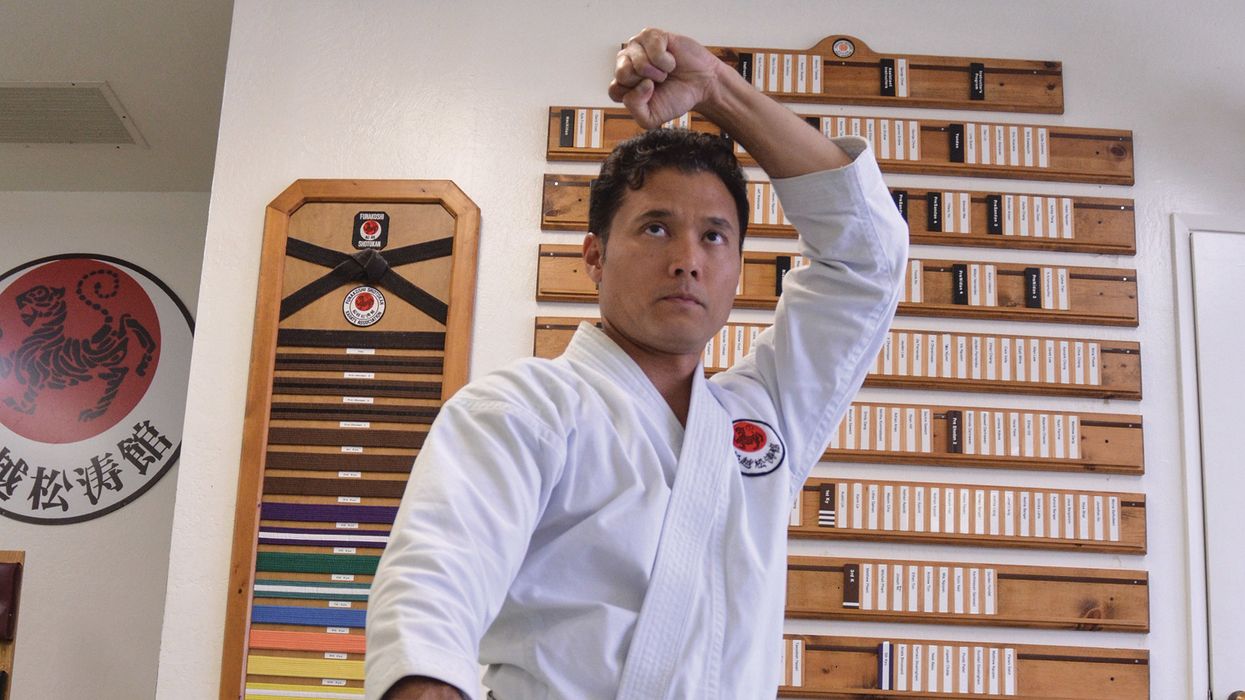 You've come across martial artists called Funakoshi often enough in the pages of Black Belt. The first such person bearing that surname was Gichin Funakoshi, founder of shotokan karate. The second person was Kenneth Funakoshi, a fourth cousin of the creator and a 10th-degree master. Now it's Kyle Funakoshi, a ninth-degree black belt and chief instructor for the Funakoshi Shotokan Karate Association. Kyle appeared on the cover of our January 2010 issue, and more recently, he was in the February/March 2019 issue. This time, he discusses the supreme strategy of faking while fighting.— Editor

On Learning the Basics Before You Learn How to Fake"

In shotokan, we start off the beginners just standing up and making sure their feet are in the correct position so they get the proper feeling of going in a straight line. After that, we put them in the front stance and say, 'You have to make sure your feet are in the correct position to start the punch because if you're doing a reverse punch and your foot is too far out, you can't turn your hips. And you can't turn your shoulders, which makes you struggle and strain and you lose a lot of that range you will need to use when you begin to learn how to fake and want to do so with a realistic punch.'"

On Whether His Methodology Is Like "Wax on, Wax off" in Karate Kid

"Some students can learn that way — by working on the foundation of faking without knowing it necessarily — but sometimes you have to actually show them why. I say, 'Look, if I punch you like this, I can only reach this far, but if I do it this way, then I can reach you.' Once I touch them, they get it. Being able to reach someone is the key to throwing a believable fake."

On Using Fakes to Fight Smart

"Sometimes in a match, you can tire somebody out by using so many fakes that the person gets worn down. Then you think, OK, I got it now! And you pour on the pressure.

"In this way, you're so much smarter, especially if you have to go against a bigger guy. We have some big guys here — powerful guys. I don't want to trade blows with them. I don't want to go in there and see how fast my punches are. So I keep on faking them, and they get so tired that they're huffing and puffing. Afterward, I say, 'You know what I did to you? I just made you tired without throwing any real techniques.'"

On Whether Experience Trumps Fakes

"If it's a believable fake, you have to be within range and you have to go from being totally relaxed to going 100 miles an hour — and then pull back before you make contact. Most times, your opponent will react to this even if he's experienced. That's because he will never know if it's the real thing or not. But if it's a slow fake or if you're too far away, he's not going to take it seriously. He won't react.

"I've trained with some experienced fighters who will fall for a fake most times. They try to use the same tactics on me, and it doesn't work usually because it's not believable. They're throwing it just for the heck of it. I say, 'It has got to be believable! If you're going to throw a jab, make me think you're going to attack. You've got to sell it.'"

On the Importance of Range When Trying to Sell It

"If you want to sell a fake with your hands, you have to throw the jab deep. Otherwise, he's not going to bite. The key is to throw a fast fake that uses your whole snap so he will move back to avoid getting hit. Success depends on how well it's done, which means doing it so your fist could make contact if you wanted.

"Sometimes your opponent thinks you're going to fake but you don't. He's waiting for a fake, maybe because you've used a lot of them, and then all of a sudden, boom, you catch him with the punch. This is high level. People who can use techniques like this are the ones I really like to watch because what they do is so purposeful — unlike those who jump around everywhere, throwing fakes that everybody knows would never connect because they don't have the range. They're not believable. Nobody falls for it."

On Hands Versus Feet

"Faking with a movement of a foot takes more energy than using the hands. If you're going to fake with an actual kick, you have to pull your leg up, which takes even more energy. In contrast, faking with the hands is quicker and uses less energy. You can even do a double fake with your hands. Sometimes I will do a fake using my whole body, but the end result is coming up with my hands."

Shotokan master Kyle Funakoshi demonstrates how the same basic faking strategy works with the side thrust kick. He readies himself (1)

"I like to keep my hands up so my opponent doesn't know if I'm going to do a jab, a reverse punch or a fake. From the same position, I can also throw a kick."

Kyle Funakoshi is a big believer in the benefits of engaging in long sparring matches. They create the perfect environment in which to practice using and defending against fakes, and they teach conservation of energy. You quickly find out what works for you when you're not at 100 percent, he says.

"Long sparring sessions also show you what other people tend to leave exposed, which means you are better able to avoid doing that," he says. "When a guy is tired and leaves his leg out there after a kick, I'll grab it and kick him in the groin really lightly just to let him know.

"Afterward, when we review the sparring session, I tell them that if they're that tired, they shouldn't do that technique because it's dangerous and can get them hurt more. I might say, 'Instead of the side thrust kick, which you're leaving out there, why don't you do a fake side thrust and then a punch? That way, you're not so vulnerable.'"

On Whether You Should Practice Combinations That Include Fakes

"In traditional shotokan, they would just do reverse punches. You didn't see too many fakes because that was a different time. It was more of a macho sport back then where you just pressed and waited for the guy. As soon as he came in, boom, you just threw reverse punches to see who was stronger.

"But now it's more of a sport. You have to change the rhythm and use more advanced tactics. Otherwise, the guy who's stronger is most likely to win. Now, you have to use your brain and some strategy. Depending on what you want him to do, you have to use fakes where you get the guy's hands to go out or to the side. You could even use a simple sweep as a fake because once he feels your foot on his ankle, he'll react. Sometimes I'll throw a fake sweep and then come up with a mawashi geri so his attention's over here and his head is left open. It's all about what you want him to think and to expect."

A believable fake means the opponent must react because he or she can't be certain the attack isn't for real — even if the sequence is familiar, Kyle Funakoshi says. Here, he uses the same hand motion for the fake (1-3)

On the Expectation of Being Hit

"When you use a fake, some people will brace for the hit. Their muscles will contract, and they'll pause. Others will just be stuck there without contracting — like there's a little mental gap and they don't know what to do because maybe they didn't cover that in training."

On Those Contracting Muscles Burning Up Energy

"Absolutely that's what happens. It's like if somebody hooks you up to one of those electrical simulators that's supposed to promote muscle growth. Your muscles will tire out eventually.

"Faking is a mental game that affects the physical body. That's why we use long matches that teach people how to move more efficiently with the techniques they might use in a tournament because everything is different when you're tired. If you're tired and somebody lands a good punch or kick — or sweeps you and chokes you — it's hard to recover from that."

On Those Long Sparring Matches

"If it's just me and one student, I'll stay with the person for 30 to 40 minutes while throwing real kicks and punches along with fakes. If it's a few of us, we'll go maybe 10 minutes and then switch partners. When I find that they're very tired, I use even more fakes. Also, I pair them up strategically — this person looks good against that person, especially if one's a puncher and one's a kicker or if one does a lot of fakes and the other throws no fakes at all.

"I've found that this method, which exposes them to as much variety as possible under adverse conditions, is the best way to teach something as important as fakes."

When We Start Sparring Again

The preferred method for fine-tuning your fakes, along with all your other techniques, is to spar with people who practice different martial arts, Kyle Funakoshi says.

"Some of our students enter only traditional tournaments where it's shotokan, shito-ryu and a bunch of other traditional Japanese styles," he says. "And there are some who go to open tournaments, where all martial arts are represented. Either choice is fine.

"But if you really want to improve yourself — your offense, your defense and your fakes — go to both traditional tournaments and open tournaments. It's good for you because then you'll see different techniques, different rhythms, different strategies. That will allow you to prepare for anything."