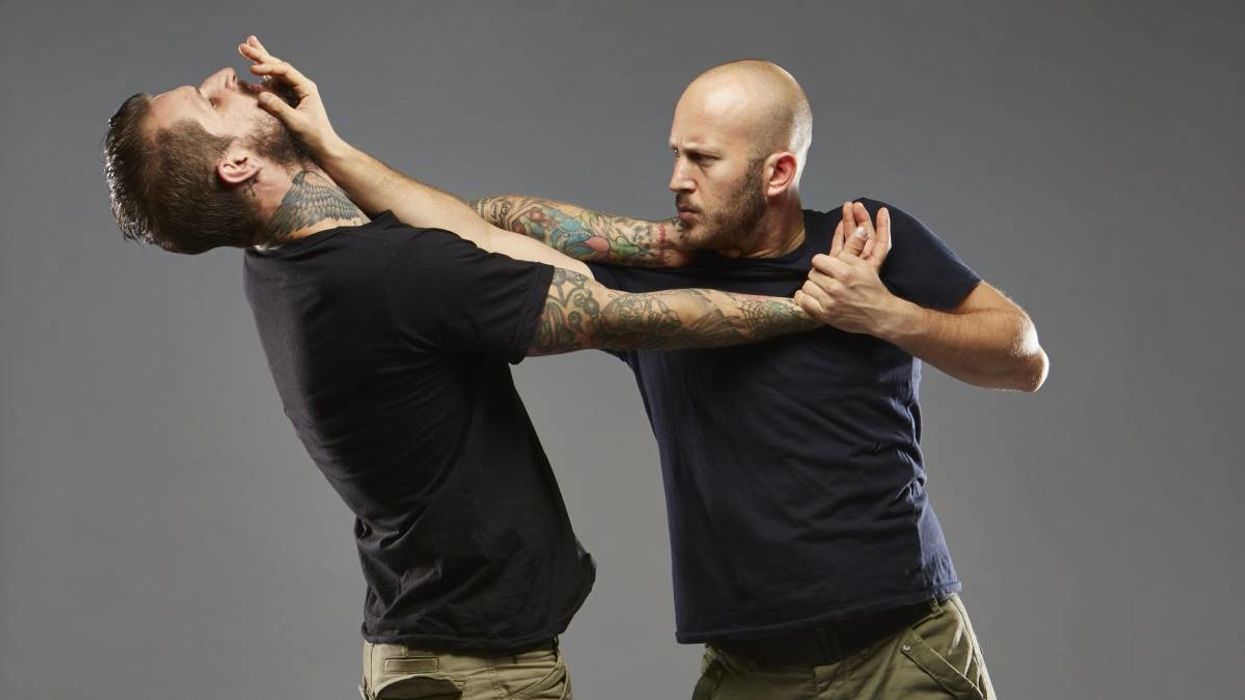 sbgi-pdx.com
This is the second part of Black Belt's exclusive interview with Darren Levine, head of the Los Angeles-based Krav Maga Worldwide.

Black Belt: Knowing how seriously krav maga takes gun and knife defense, a stick, especially a lightweight one, must be viewed as a much lower threat.

Darren Levine: Not really. I've worked on murder cases in which a stick, making contact with the edge, has taken chunks out of a person's head. So I appreciate the danger of the stick. To defeat it, you have three options: Redirect it, build a wall against it or move in. The most dangerous part of a stick is the end because it travels at the greatest speed and therefore has the greatest force. It gets less dangerous as you move down it toward the handle. It loses its effectiveness when you get to the hands of the person swinging it. Then you get to another dangerous part: the butt of the stick. As you can see, we analyze danger and see how people are using weapons on the street, and we get reports from officers who are using our system. That helps us make krav maga more effective. [ti_billboard name="Sub-Gun Defense"]

Levine: We are extremely well-known and respected for our weapon-disarm techniques. However, we also have a unique, no-nonsense approach to dealing with empty-hand attacks based on the military origins of the art and the people we teach now. Our mission at Krav Maga Worldwide is to teach soldiers, members of anti-terrorism units and peace officers a realistic approach to self-defense because their lives depend on it. When you're building warriors, failing is simply not an option. If they fail or hesitate in the field, their weapons can be taken away and used against them or against third parties. Our approach to empty-hand combat is to eliminate the multiple layers of danger in the order of priority that exists in virtually every violent encounter. Our main concern is to teach things that work — instinctive, easy-to-learn, easy-to-perform defenses against punches, kicks and other strikes, as well as against chokes, head locks and other catches, holds and grabs from every angle and position. Our goal is to quickly end the threat and regain control by neutralizing the assailant before he's able to inflict injury. Krav maga is designed so operators can successfully perform defenses from diverse positions of disadvantage, from varying degrees of readiness and while under stress.

BB:When women use krav maga against men, how do they overcome the strength difference?

Levine: It's not going to be what people want to hear, but it's the truth: Strength is an essential attribute for fighting and self-defense. There's no way around that fact, period. You need strength to absorb strikes and to deliver powerful attacks and counterattacks. Both women and men must focus on building strength, stamina and mental toughness. That being said, Imi Lichtenfeld used to remind his students about one way to successfully deal with a more powerful assailant: "The elbow of a baby is stronger than the balls of Muhammad Ali." What he meant was, women — and men — must exploit the vulnerable parts of an assailant's body. Women must also be prepared to use objects in the environment as shields or striking tools. Krav maga stresses being aware of your surroundings so you can reduce the chance of appearing to be a vulnerable target. Our classes teach you how to survive a fight by being able to engage the attacker. Psychologically, women often won't defend themselves, but they will fight to the death for their child. Putting women in touch with this side of aggressiveness is essential. [ti_billboard name="Third-Party Protection"]

BB:Is krav maga a complete art, or do you recommend that hard-core students supplement its stand-up techniques with Brazilian jiu-jitsu, for example?

Levine: From all the special units we teach, the most common comment contained in our end-of-course evaluations is that the participants have waited their whole lives to find such a complete system — and they're excited and feel strongly that they have found that complete system in krav maga. However, that has nothing to do with the need to constantly improve oneself. To grow, to learn, to evolve, you must cross-train and expose yourself to everything you can. I love Brazilian jiu-jitsu and Thai boxing. I encourage everyone to be open, to learn, to be hungry for growth. An important lifesaving method can come from any system, right?

BB:Krav maga seems to focus on punching to the face. Is there any special technique for avoiding broken bones in your hands while doing that?

Levine: You must learn to punch properly. I've seen as many broken hands from palm strikes as I have from bare-knuckle, fisted punching. It's all about training correctly. In a specialized unit, the last thing they want is for the operators to break their hands during training. Remember that they have to use weapon systems, and to do so, their hands must be free from injury. A lot of time has been spent teaching people to strike powerfully without getting injured. Also, we strike those areas of the assailant's body that aren't hard or bony. Hitting the throat, the chin or the liver, for example, is extremely effective and injury free.

BB:What are the most popular krav maga striking tools?

Levine: It's different for every fighter. When it's a matter of survival, a matter of saving your life, there are no rules. My favorites are a rock or stone, the butt of a rifle, a blunt object like a pipe or sap, the head butt, the elbows, the knees and the shinbone. Obviously, I'm trying to make the point that any tool can be your favorite weapon; it's not just about parts of your body.

BB:You said that the krav maga philosophy is to have as few techniques as possible. With that in mind, please address this saying: If the only tool you have is a hammer, you tend to view every problem as a nail.

Levine: That saying contradicts the very essence of krav maga. We deal with every possible threat, attack and violent encounter, but we teach by way of principles so that the fewest number of techniques apply to thousands of life-threatening situations, not the other way around.

Levine: Yes, more and more. However, that's not what krav maga is about. My friend Bas Rutten, an Ultimate Fighting Championship fighter and former King of Pancrase, has amazing physical talent. He's one of the best fighters and thinkers in martial arts history. However, when I explained krav maga to him, all that was necessary was to use one quick scenario. I put a gun to his head and asked, "What are you going to do?" You can be the most elite professional fighter in the world, but that doesn't mean you have the answers that krav maga teaches, all of which have come from real-life crime and violence. [ti_billboard name="Gun to Head on Ground"]

BB:What is the krav maga approach to self-defense?

Levine: One of Imi's favorite sayings was, "Krav maga doesn't have any rules except for one: Don't get hurt." People hear that and think it was just a cute statement, but it's deeper and more meaningful than that. It doesn't matter how strong your counterattack is if you haven't taken care of the primary danger. What he was saying is, if someone is choking you or trying to stab you, if you can't initially break the choke or stop the knife, you'll get hurt. You always have to think, eliminate the danger. Some people think of danger on only one level, but there's also secondary and tertiary danger. Imi's message, to me, was to take care of the immediate danger, then take care of the person who's the source of it. If I can pick up something — maybe a chair, a purse or a plate, anything — I'll use it. I don't want to make the fight fair. If someone attacks me, I'll use everything at my disposal to win. I didn't start the fight, but I'm going to finish it so I can go home to my children. The thing that means the most to me is getting letters from members of the military who've used our techniques and survived. When they write, "Krav maga got me home to my family" — that's all I care about.