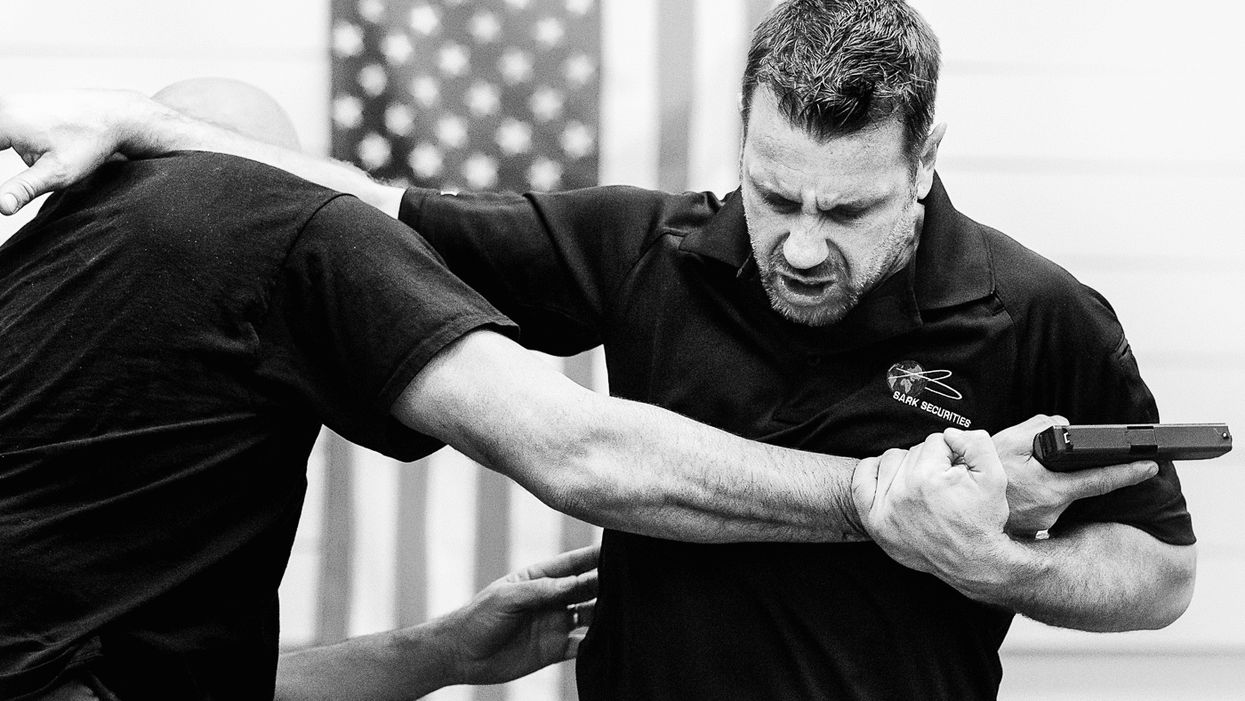 It's late at night. You're walking to your car in a parking structure. Your mind is occupied, and you're obviously not as aware of your surroundings. Without warning, a man steps out of the shadows. You can't see his face, but you can see the semi-automatic pistol in his hand. It hovers a few feet away, pointing at your chest.

“Give me your car keys now!" he orders.

Startled out of your thoughts and frightened by the gun, you dig into your pocket and pull out the keys.

“Give them to me!" he commands, and you obey.

The gunman snatches the keys, gets in your car and drives away.

It's late at night. You're walking to your car in a parking structure lit by a few dim bulbs spaced too far apart. Your mind is occupied, and you're obviously not as aware of your surroundings as you ought to be. Without warning, a man steps out of the shadows. You can't see his face, but you can see the semi-automatic pistol in his hand. It hovers a few feet away, pointing at your chest.

“Give me your car keys now!" he orders.

Startled out of your thoughts and frightened by the gun, you dig into your pocket and pull out the keys.

“Give them to me!" he commands, and you obey.

The gunman snatches the keys, then backs away and shouts, “Now get in the trunk!"

The first scenario is a clear argument for complying with a gunman's demands. A handgun represents a significant threat to your life. If you can maintain your safety by giving him what he wants, do it. Your car, your wallet and your jewelry are meaningless. Going home to your family is everything. The actions described in scenario No. 1 are replayed on the streets of America every day. Unfortunately, so are those described in scenario No. 2. You can cooperate with an armed assailant and give him everything he asks for — and still end up in mortal danger. The worst part is that you may never know which scenario you're facing until it is too late. This simple, unnerving fact is the clearest reason for including realistic gun defenses in your defensive-tactics system.

Krav maga, the official hand-to-hand combat system of the Israeli Defense Forces, includes some of the most practical and effective techniques in existence — techniques that are relied on by soldiers and police officers who face armed threats day in and day out. The methods krav maga teaches for gun defense allow you to create responses that work in a wide variety of circumstances. That reduces the number of techniques you must learn and remember, which results in a shorter training time and faster application under stress. For instance, krav maga uses the same technique when a gun is placed anywhere in front of you, whether it is touching you or not. The same technique, with very minor adjustments in body defense, works when the gun is pointed at your forehead, under your chin or at the side of your head. All krav maga gun techniques employ four basic principles:

Often these four principles will overlap. For instance, controlling the weapon and counterattacking frequently take place at the same time. For you to successfully use a gun defense in the gravest extreme, you must understand and be able to implement all four principles.

In the following weeks, each of these principles will be discussing in further detail.

Use of the Gun

Students often ask whether they are allowed to shoot the gunman once they have taken away his weapon. The answer depends on the context. This article cannot define and explain the legal ramifications of self-defense and the use of force in every part of the United States. Furthermore, such decisions must be made by you in the heat of the moment, not by a magazine article.

However, sound tactics must at least include the possibility of using the weapon if you believe your life is still in danger. If the gunman charges after you once you've taken his weapon, the assault clearly is not over. Consider his mental state in that situation: He threatened you with deadly force, you defended yourself and disarmed him, you are now armed, and he still attacks you. In this scenario, it makes tactical sense to retain the weapon and hold it in a position where it may be used. It will then be up to you to determine your own course of action.

John Whitman is a Los Angeles-based freelance writer and third-degree black-belt krav maga instructor with more than 10 years of experience in the system. For more information about krav maga, visit www.kravmaga.com.

The above article is an excerpt from The Ultimate Guide to Reality-Based Self-Defense. This book gives you the keys to unconditional survival. Featuring some of the best self-defense articles from the Black Belt archives, the book explores a wide spectrum of violent situations, delves into the criminal mind, and teaches you how to effectively assess a violent situation and act accordingly.

The Czech Republic's Lukas Krpalek put himself in the history books Friday when he became only the third judoka to ever win Olympic gold medals in two different weight categories claiming the men's +100 kg division in Tokyo. Krpalek, who won the under 100 kg class at the 2016 Rio Olympics, hit a throw with time running out in the finals against Georgia's Guram Tushishvili and went into a hold down to pin Tushishvili for the full point to earn his second Olympic championship. Meanwhile, two-time defending +100 kg champion Teddy Riner of France, considered by some the greatest judoka in history, was upset in the quarter finals and had to settle for the bronze.

On the women's side, Akira Sone helped Japan break its own record for most judo gold medals in a single Olympics when she claimed her country's ninth gold of the tournament capturing the women's +78 kg division against Cuba's Idalys Ortiz. The win came in somewhat anticlimactic fashion as no throws were landed and Ortiz lost on penalties in overtime.

The World Association of Kickboxing Organizations was recognized along with five other organizations at the 138th session of the International Olympic Committee.

July 20th became a significant day in sport karate history last week, when WAKO received official recognition by the IOC. This is a major step in the right direction for a league that hopes to one day bring sport martial arts to the Olympics to join other art forms like Taekwondo and Judo. WAKO is predominantly based in Europe and is focused on kickboxing and point fighting, but their events consistently draw competitors from other continents and their forms and weapons participation has steadily increased in recent years. The recognition granted at the recent IOC meeting was specifically for the sport of kickboxing.