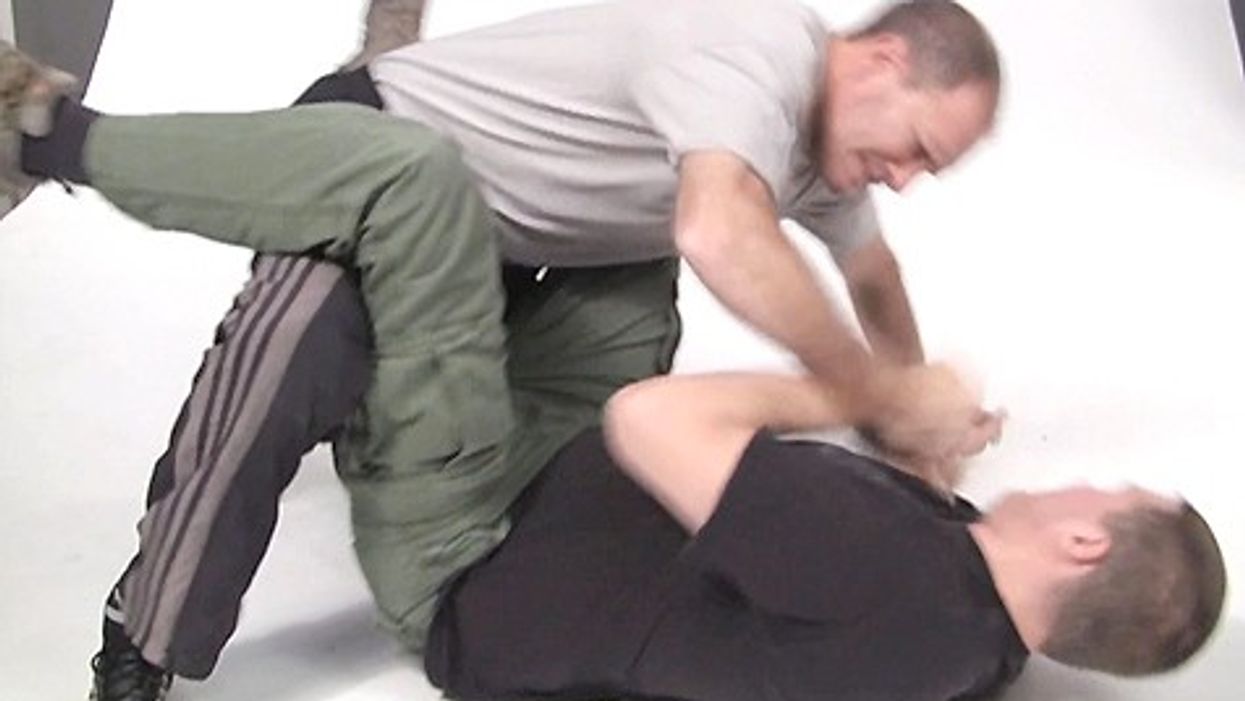 Even the best of fighters can sometimes find themselves on the ground. Eyal Yanilov shows you his take on countering a knife attack from that position in this EXCLUSIVE video!

Eyal Yanilov and his krav maga defenses against variations of the front kick were featured as the cover story for the March 2011 issue ofBlack Belt(which happened to be the third of five special 50th Anniversary issues leading up to the June 2011 50th Anniversary Collector's Issue). In this exclusive martial arts video filmed during the photo session for that issue, the krav maga expert shows you how to defend against a knife attack from the ground position.

Explore the life and times of Bill Wallace in this FREE download!
Bill “Superfoot" Wallace: How He Became the World's Greatest Kicker for 50 Years!


In this krav maga video, Yanilov is on his back on the ground and an attacker sits atop him, thrusting a knife. Yanilov blocks the downward knife attack, explaining, "At the same time [as we block], we are counterattacking," as he thrusts a tiger-claw-style eye gouge into the assailant's face.

"The attacker is usually recoiling," Yanilov continues. "I don't let him. ... When I recoil, I use my hips to throw him to the side and continue to attack." Yanilov demonstrates this hip action and counterattack by rolling the attacker onto his back and getting his fist right up into his face. He grabs the attacker's knife arm and pins it on the ground, immobilizing the attacker's weapon and supporting his own bodyweight in the process. Yanilov gets up on one knee and one foot to secure his ability to move quickly from the danger zone while still maintaining enough leverage to control the situation.

"The hook is being turned to grab with pressing on [the attacker's] arm so it will be difficult for him to move the arm," Yanilov explains. "All this time, you continue to strike. At this moment, you can choose to get away from the danger zone [or] disarm and get out." The krav maga master then demonstrates how to get out of the situation, grabbing the opponent's leg and flipping it swiftly to one side to open his own escape route. "The last thing you do [in this particular example]," Yanilov says, "is leave the knife and move away."

One of the most respected krav maga practitioners in the world today, Eyal Yanilov is currently listed as "master level 3/expert level 8" in krav maga. This is the highest rank krav maga founder Imi Lichtenfeld ever awarded to any student. In 2010, Yanilov founded Krav Maga Global and serves as its chief instructor in a continued effort to spread real krav maga worldwide.