Knife Fighting: What You Need to Know to Realistically Use and Defend Against a Blade 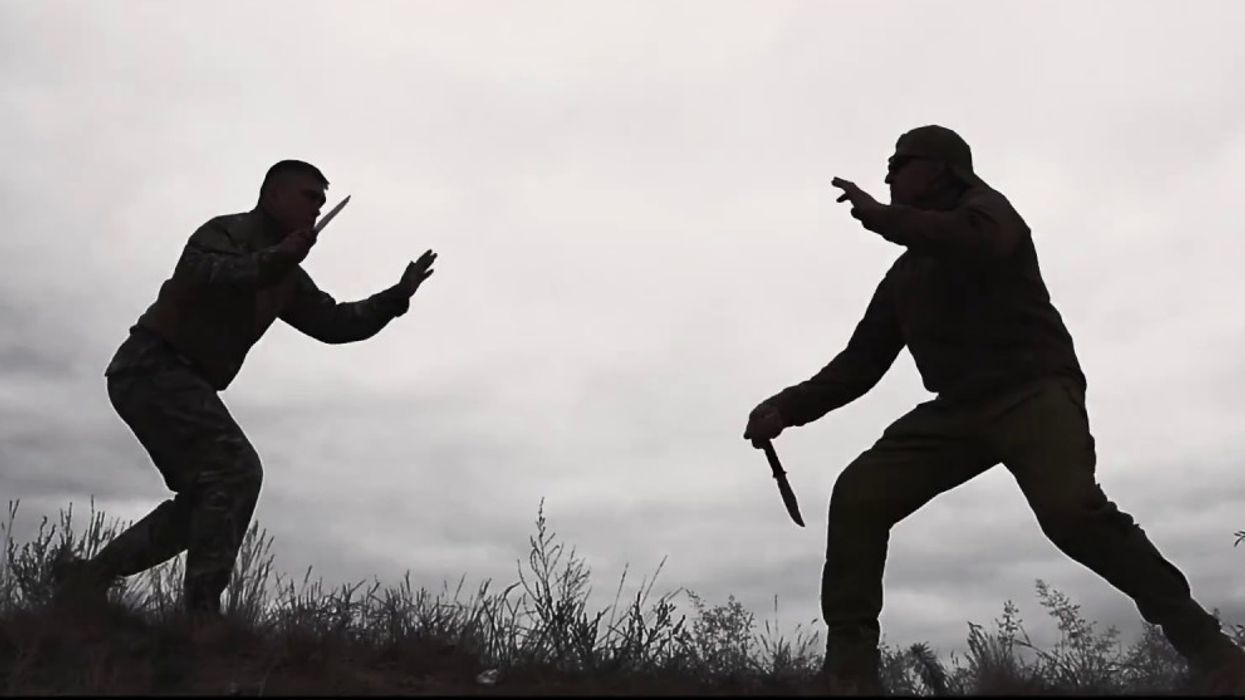 Of all the possible topics an instructor can misinform students about, defense against a knife attack is by far the most dangerous. Anyone who claims to be an expert with a knife and teaches blocking, empty-hand disarms and low horse stances might as well be teaching students to catch bullets in their teeth.

Because very few knife-fighting tournaments take place in the United States, it is difficult for a prospective student to gauge the authenticity of an edged-weapons instructor. It seems that all an instructor needs to fool the public is a pair of camo fatigues and a photo of himself with a nasty expression on his face and his knife positioned against his opponent's throat and — shazam! — instant Rambo.

In my opinion, the most realistic methods for fighting with and defending against edged weapons come from the Philippines. Because real confrontations with blades are all too common in that Southeast Asian nation, their fighting techniques have nothing to do with phony heroism and everything to do with survival. This article will describe the techniques and training methods you need to know to defend yourself against a blade — and to use one.

Silat for the Street is the title of a new book by Black Belt Hall of Famer Burton Richardson and Black Belt magazine. Order your copy here.

The infrastructure for knife fighting is footwork. It allows you to maintain the correct distance between yourself and your opponent. Having a low stance with no footwork is like having a Ferrari with no wheels. Being able to quickly maneuver toward or away from your opponent is essential in any fighting scenario — but when he is pointing a knife at you, the necessity skyrockets.

When you think of proper footwork in boxing, you probably envision Muhammad Ali and Sugar Ray Leonard darting around the ring — light, cat-like and constantly sticking and moving. That is the type of footwork that is appropriate for knife fighting. Obviously, when you have a sharp weapon in your hand, you do not need to plant your feet to do damage to your opponent. It is far more important to stay light and agile. One slice across the knife hand or a quick thrust to the face may be all it takes to end the altercation.

Distance is key when a knife is play, Vunak says. Too close means too easy to cut.

The distance at which you choose to fight your opponent is important. Many instructors teach their students to engage in knife fighting in boxing range. But if you were to watch one round of a boxing match and count how many times each fighter gets hit, you would see that contact takes place way too often. If the boxers traded their gloves for straight razors, within 10 seconds they would be wallowing in a pool of blood.

There are hundreds of drills that involve close-quarters knife and stick work in boxing range, but they were developed to improve your attributes: sensitivity, coordination, body mechanics, etc. That's why they are called self-perfection drills. They should not be confused with real weapons fighting for the purpose of self-preservation.

In combat, an experienced knife fighter always fights in largo mano range, which is just outside kicking range. He can more easily avoid being sliced, and he can still accomplish his primary objective, which is to cut his opponent's knife hand.

If you cut your opponent's hand, you will instantly disarm him. It is physically impossible for him to hold a knife when the tendons, muscles and ligaments responsible for controlling his hand are severed. Once you have defanged the snake, the snake is harmless; you then have the choice of killing it or letting it go. Correct footwork and distancing are crucial to making this strategy work.

“Defanging the snake" also applies in stick fighting. Unfortunately, in most modern tournaments you see fighters with protective gear obsessively engaged in head-hunting. Although those bouts do teach students how to deal with adrenaline and are a worthwhile experience, that type of practice should constitute about 5 percent of your training. It should not be your focus because the rules seldom award points for smashing the opponent's hand, and that is unrealistic for self-defense. If a fighter were to defang the snake by striking his opponent's unprotected hand with a piece of hardwood or a pipe, those neglected hand smashes would have the same effect as a hand cut.

In a knife fight, timing is as important as footwork and distancing, but it is more ambiguous and difficult to explain. Timing can be described as the ability to hit your opponent before, during or after he takes a shot at you. You must feel that split-second opening for your technique. Once you develop an expert sense of timing, you can literally move at one-tenth speed and still connect. In sparring matches, Filipino martial artists in their 70s have struck me 10 times more often than I struck them because they possessed near-perfect timing.

To develop timing, you need awareness and line familiarization (knowledge of all possible angles of attack), both of which tend to improve with age and experience. After sparring briefly with Cacoy Cañete, who at age 65 was still able to basically use my body for target practice, I asked him at what age he was in his prime. He replied, “In about another 10 or 15 years."

As with most things in life, perception is everything. If you perceive the points mentioned above as the most important parts of knife fighting, you are concentrating on the finger and missing all the heavenly glory — to paraphrase Bruce Lee.

So what should you do if you are attacked by someone with a knife? First, you should run. It has been said that to defend against a blade, you must first learn how to fight with one; and the more you learn about fighting with one, the more you will respect the damage that it can inflict. All a blade has to do is make contact with you. The attacker does not even have to be particularly skilled to seriously hurt you. Instructors who would have you disarm a razor-wielding attacker are living in a fantasy land. They do not understand the grim reality of knife fighting because they haven't experienced it. However fun or romantic it may be to picture yourself snatching a knife from a mugger's hand, the decision to try could be the last decision you ever make.

A simple test will demonstrate why: Buy a red magic marker, go to a confined area and have a training partner “assault" you at full speed with the marker acting as a live blade. No matter which blocking or disarming techniques you try, you will soon discover red lines all over your body.

Obviously, the best option when facing a knife is to run. If you cannot get away, you need to find an equalizer. If you carry a knife, pull it out. Or pick up a bottle or an object to throw: a pool ball, chair, table, pool cue, hot soup, etc. Use anything necessary to distract him so you can escape.

If there is nowhere to run and no equalizer available, you will have to rely on your empty-hand skills. I would probably attempt a well-timed low double-leg takedown, then smother the attacker and use techniques from kina mutai, the Filipino art of biting and eye gouging. Still, I would most likely get cut, perhaps even fatally. That's all the more reason to fall back on plan one and run away.

About the author: A renowned jeet kune do and Filipino martial arts instructor, Paul Vunak is the president of Progressive Fighting Systems.