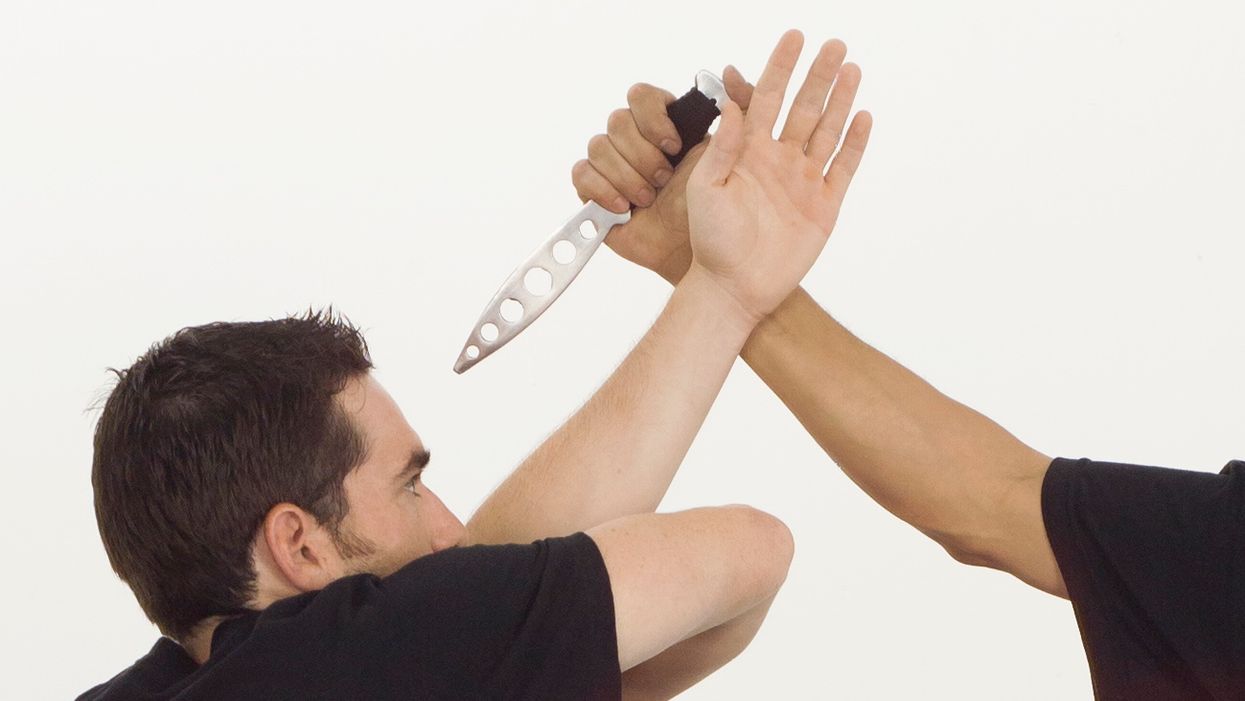 The world of knife fighting has an unspoken rule: Go in, cut and get out unscathed.

It's that simple, but as martial artists, we often run into unrealistic knife techniques that reveal our peers' overconfidence and, at times, arrogance. The intricate and often flowery movements they teach, both for offense and defense, may look good, but they're doomed to fail in the long run.

The sad reality is, the streets are full of people who wouldn't think twice about committing murder. Their mission is to assault you, take your possessions and make their getaway.

Criminals don't try to impress you with fancy techniques. They know that a sharp thrust to the midsection or slash to the neck will get the job done quickly and efficiently.

When facing such an adversary, it's long been known that the best block is no block at all. You need to get out of harm's way using deflection and evasion. Whenever it's flesh against a sharp object, the sharp object always prevails — typically resulting in injury or death.

This is known as the law of the blade. Our knowledge of it has resulted in the development of countless knife-fighting methods that actually work.

Many of those time-honored techniques are still taught, but some martial artists prefer to focus on modern methods that consist of vast amounts of verbiage and complicated moves. These systems work extremely well in a martial arts training environment, but if a hapless student attempts to employ one of these tactics on the street, he'll find himself in a difficult situation in a matter of seconds.

Here is typically what happens: The attacker moves in for the kill, and the defender applies a subtle, semicircular technique executed under the knife-wielding hand — or a similarly complex move. The martial artist finds that his attempt to disarm the thug has resulted in dozens of stitches. Because the attacker has cut and run, the defender is left wondering what happened and which stance he should have been in.

How, then, is a martial artist to know when to parry, when to deflect, when to counterattack and when to run? The answer is, you can't know for sure in any particular situation because your attacker won't convey his intentions before the confrontation gets ugly.

Therefore, if you cross paths with such a criminal, assume that any close-quarters technique you try will result in slashed body parts. Your best strategy is to run away.

Does that mean you should rethink your entire repertoire of knife fighting and knife defense? No, but it may indicate that it's time to examine how you've been training.

You'll want to polish your techniques so you can use them at full speed to stop an attack executed at full speed. Research has shown that many of the martial artists who get injured in knife attacks didn't see the knife that cut them. The assaults happened too quickly, and the defenders had no time to counter. When they tried to employ smooth, flowing blocks, they discovered that they couldn't compete with a thrust to the gut or slash to the throat.

Whenever he talks about training, Black Belt Hall of Famer Fumio Demura says, "Strong, steadfast techniques work well against strong attacks." Because his advice applies as much to knife work as it does to empty-hand fighting, it would behoove all martial artists to ensure that the following three variables are covered in their training:

It allows you to catch your opponent off-guard as you make the first move or mount your counterattack. The 20/40 method teaches the importance of closing the gap at 20 miles an hour, making your offensive or defensive move, and then withdrawing at 40 miles an hour to avoid being countered.

It allows you to watch your assailant's every move. The better you're able to assess your surroundings, the quicker your response will be — which means you may be able to terminate the threat before the situation escalates.

About the author: Dana Abbott is a kenjutsu practitioner and Black Belt's 2004 Weapons Instructor of the Year.