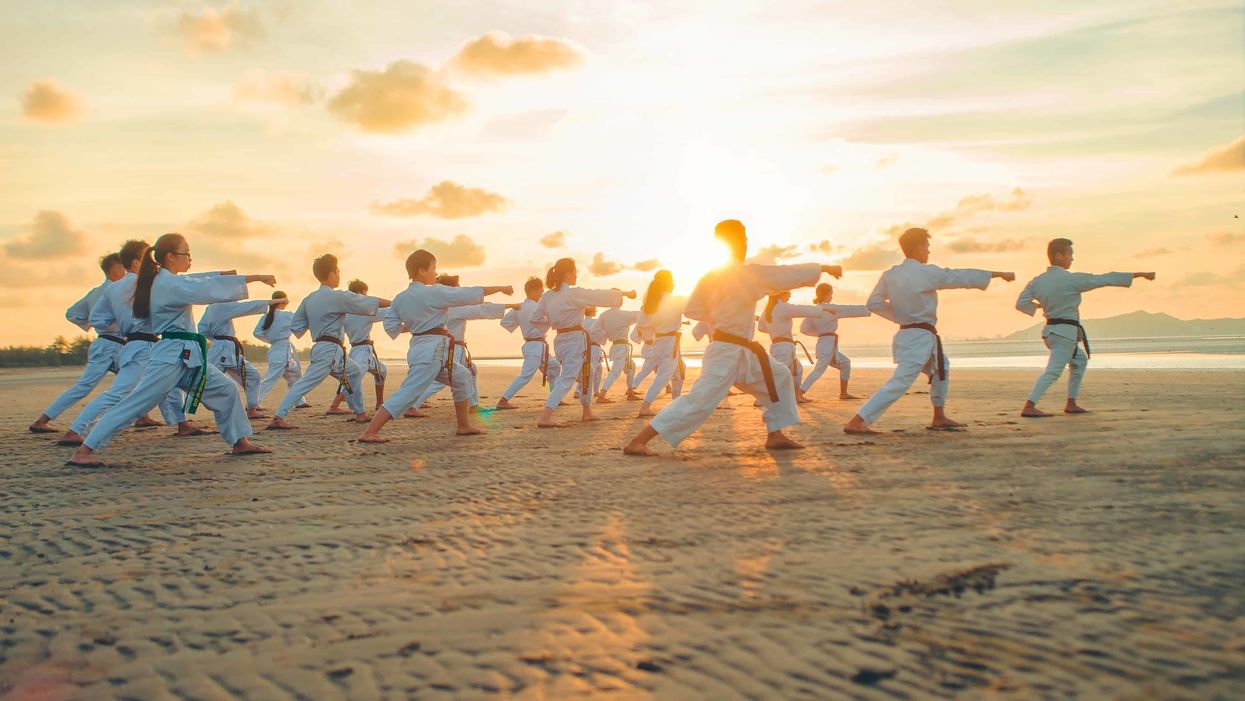 For decades, kenpo has been renowned in the West as one of the most effective and efficient martial arts in existence, and for hundreds of years before that it enjoyed a similar reputation in Asia. Much of that success can be attributed to a set of fighting principles that has been defined and refined into an exact science through the efforts of scores of masters who knew the meaning of trial by fire. This article outlines 10 of those laws for the benefit of all the martial artists who have not had the opportunity to experience them firsthand.

Kenpo Law #1: The Circle and the Line

The first law of kenpo states that when your opponent charges straight in and attacks, you should use your feet to move your body along a circular path. You should also consider moving your arms in a circular pattern to deflect the oncoming force.

This principle has several meanings. First, it indicates that kenpo is primarily a striking art. Seventy percent hands and 30 percent feet is the classical breakdown, but you can change the proportion according to the circumstances or your body build.

The second meaning is that if a confrontation is inevitable—a thug is climbing through your bathroom window at 2 o'clock in the morning and he starts swinging a baseball bat—you should not wait for the aggressor to attack first. You need to hit him first with a foot, a fist, an elbow or a knee. You also need to hit hard and hit continuously until he is subdued.

The kenpo curriculum also includes numerous grappling and throwing techniques, but research has shown they are used in less than 25 percent of the encounters practitioners have found themselves in, and they are ineffective against multiple attackers. Because grappling uses four times as much strength and energy as striking does, it has been deemed a last resort suitable for use only if your opponent penetrates your first and second lines of defense: your feet and fists, respectively.

Kenpo is different from many karate styles in that it teaches you to strike first and strike often in rapid succession— high, low, straight in and along a circular path. While unleashing such rapidfire strikes, it becomes difficult to kiai (shout) in conjunction with each one.

Therefore, you should forget about issuing a kiai with each blow; in fact, doing so means you are expending excess energy.

Your first and second strikes should be designed to stun, distract and slow your opponent. Your third and, if necessary, fourth strikes are the power blows. Remember the kenpo maxim: First set your opponent up, then take him out.

In Japan the makiwara board is used to toughen the hands, and in Thailand muay Thai fighters harden their shins by kicking banana trees. Kenpo is different in that it teaches the path of least resistance and least pain. Precisely targeting the temple, face, nose, neck, solar plexus, stomach, groin and floating ribs is superior to simply pummeling away on random parts of the aggressor's body.

Kenpo's mandate to kick low is based on logic. A roundhouse kick and spinning reverse crescent kick to the head may be flashy and impressive, but such maneuvers take longer to execute because your leg has to travel farther.

They also expose your groin to your opponent's kick. Because kicking high requires superior balance and focus, you should practice your leg techniques high. But deliver them low for self-defense. Furthermore, kicking low to the legs—executing a “pillar attack"—can break your opponent's balance and his leg.

Kenpo emphasizes economy of movement and economy of time. Hence, its no-block principle teaches that to avoid being struck by a punch or kick, you should move your body out of harm's way. The most advanced defense taught in the martial arts, it was perhaps best expressed by the old Shaolin priest in the Kung Fu television series: “Avoid rather than check; check rather than block; block rather than strike; strike rather than hurt; hurt rather than maim; maim rather than kill—for all life is precious."

Strategically, a block is a wasted move because it does not stop your opponent from attacking again with his free limb. It is much better to move yourself out of the way of his punch or kick and simultaneously counterattack.

This way of fighting is reserved for brown belts and above, however, because it requires a higher level of skill to employ correctly and a significant amount of sparring experience to avoid the tendency to allow your feet to stick to the ground during the crisis your brain senses.

The no-block principle does not mean blocking plays no part in fighting. If you were standing in a corner with no way out and an assailant charged with a club, you would have to block his attack. That's why kenpo teaches eight distinct blocking systems, along with dozens of traps, yet they all lead to the same maxim: The best block of all is no block at all.

Aikido includes many techniques that rely on the same principle of yielding and redirecting. In most karate systems, however, blocking is extremely hard and may injure not only the attacker but also the blocker. For the most part, kenpo does not adhere to this concept of “a block is a strike." Instead, it teaches you to block soft and strike hard.

Redirecting is also of paramount importance. Many arts teach their practitioners to use a downward block to stop a front kick, resulting in the dents' hammerfist being slammed into the attacker's instep, but such an impact can break the blocking hand or arm. Kenpo teaches that it is preferable to parry your opponent's leg to the side and spin him off-balance before you counterattack hard. Such a redirecting movement will usually disrupt his balance and leave him vulnerable.

Mobility may be the easiest kenpo principle to understand. It holds that a moving target is harder to hit than a stationary one. As basic as that sounds, many martial artists fail to implement it.

Kenpo teaches that there are three types of fighters: the statue, who has little mobility and will not retreat; the runner, who has to be chased around the ring; and the steamroller, who just keeps coming at you. If you are any one of these, be careful because you are predictable and can thus be defeated. To transcend mediocrity, you must mix things up and no matter what, keep moving. If your stance is upright and your movement is good, you will be able to put yourself in a superior position relative to your opponent.

The law of flexibility is the law of survival. Kenpo is unique in that it adapts to your build, personality and spirit. If you stand 4 feet 10 inches tall, it makes little sense for you to focus on kicking when your greatest strengths may be mobility and quickness. If you are a 110-pound woman, it makes little sense for you to grapple with a 230- pound assailant. The old kenpo masters showed their wisdom when they proclaimed that in a fight for your life, you should use what you know best and forget about the sanctity of the style. Every practitioner has different attributes that can make him or her effective.

The final principle of kenpo is composed of two essential components: the internal and external. A rabid dog may pose a formidable threat, but it possesses only the external component of the warrior spirit. Inside, the animal is not thinking. To have a complete warrior spirit, you must be ferocious on the outside but calm and tranquil on the inside.

Samurai warriors used to say that any day is a good day to die. That did not mean they sought death. On the contrary, they wanted to preserve life— especially their own. But they knew that if they went into battle with fear in their heart, they could die or sustain a serious injury. They knew that only by embracing and accepting death could they focus everything on the physical task at hand: defeating the enemy.

Your kiai, facial expressions, stance and on-guard position must all work in unison. Following the principle of yin and yang, you should be hard on the outside and soft on the inside. When used in this way, warrior spirit can be more important than physical skill.

Perhaps the best way to put the 10 laws of kenpo into practice is to think of them as keys that can unlock the doors of higher learning. Remember that they are not written in stone, as there are exceptions to every rule.

In the 35 years I have practiced kenpo, I have discovered only one negative side to the 10 laws: A single lifetime is not enough to learn everything there is to know about them. No doubt many martial artists would consider that a positive.