One Art Is Not Enough: The Self-Defense Philosophy of Kickboxer Kathy Long 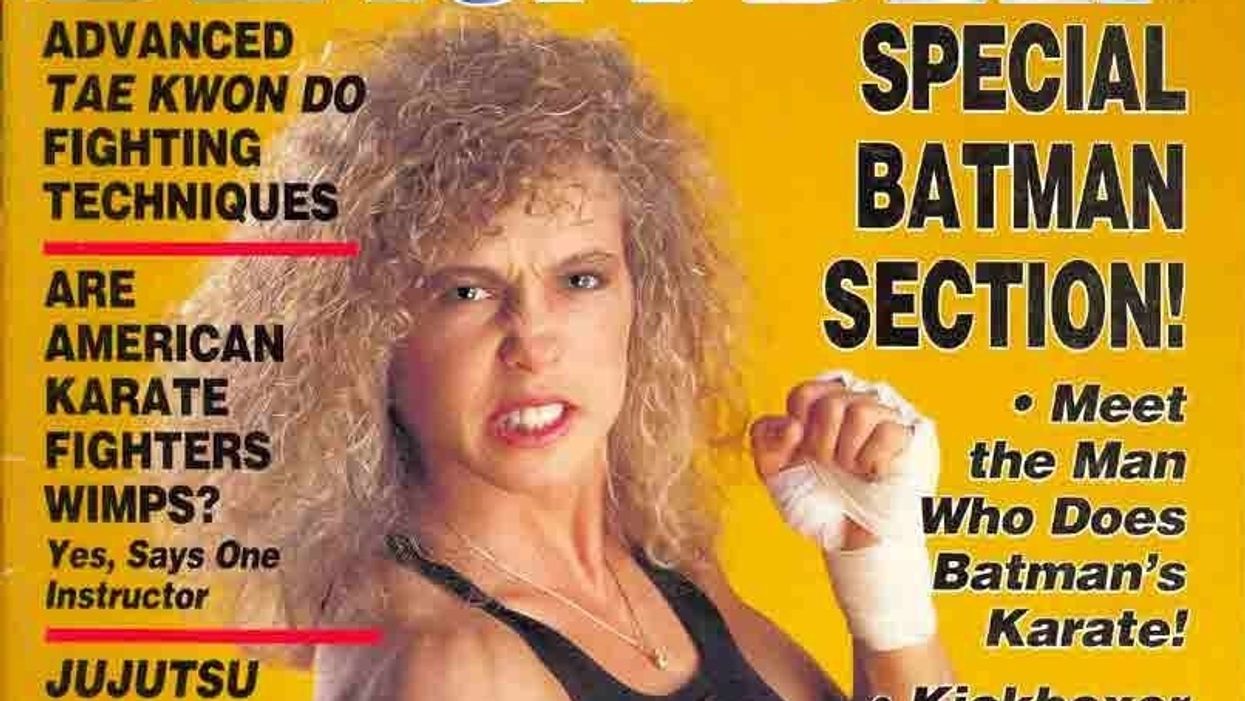 Is it OK to be a jack of all trades and master of none when it comes to self-defense? Former world champion Kathy Long thinks so. In this article, you'll find out why as she discusses her training in kickboxing, BJJ, FMA and san soo kung fu!

(Read Part 1 of this article here.)

“I think kicking and punching are obviously very important," Kathy Long says. A look at any of her title fights proves she's mastered the subset of striking skills allowed under kickboxing rules. But she also realized that she needed more — specifically, she needed ground work.

“Grappling has always been one of my weakest points — even though when I trained with Eric Nolan, he did have us grapple," Kathy Long says. “I just never got good at it. Now I learn it from the Machados because I want to make sure I know how to do that."

Kathy Long offers valid but somewhat biased advice (because of her particular background) for students searching for true versatility. "Take san soo, mix it with jiu-jitsu grappling, kickboxing and Filipino martial arts — either kali or escrima, with empty hands, sticks and knives — and you're set," she says.

Such flexible skills are needed because a martial artist never knows what kind of situation may arise. "I worked as a bouncer in a bar for a couple of years, and I've seen a lot of the ways people who don't know martial arts fight," Kathy Long says. "There are times when they end up on the ground, and there are times when they stand there crazily throwing punches at each other without rhyme or reason."

Buy this pankration book in the Black Belt Store!

Only dedicated practice can make a martial artist's brain and body function under that kind of onslaught and use those hard-earned skills, Kathy Long says. "There are so many attributes needed to be a good fighter. How many people can think calmly under pressure? It is very difficult.

"Believe it or not, boxing or kickboxing is a great way to develop that attribute. If you get in the ring and have somebody throwing punches at you, you have to be able to think offense and defense and slip and move. Punches and kicks are coming at you, and you must stay calm, check something and strike back, and try to set up your opponent for different things."

A frequently mentioned fear that afflicts martial artists who cross-train involves becoming what's commonly referred to as a "jack-of-all-trades and master of none" — in other words, a person who has a superficial knowledge of several styles but advanced skill in none.

"Why is it bad to have a good basic grasp of three or four martial arts and not be a master of any of them?" Kathy Long asks. "A lot of people work; they don't have time to dedicate five or six years to every style they want to get into."

Because of such outside commitments, she advises students to study whichever base style they prefer and supplement it. "You take what you learn from other arts and bring it into the style you have," she says. "But it's a good idea to have a base; it can be taekwondo, judo, kung fu, aikido. Once you decide to bring in concepts or theories from other styles, you should practice them as often as possible."

Kathy Long admits it's quite possible that martial artists with a bit of knowledge in a new art could get hurt if they try to use their new skills for self-defense too early. "That's why you have to practice as often as possible," she says. "People who just pick up a technique here or there and practice it once or twice — if they try to use that in a real-life situation, they are probably going to get beat up because they are not familiar with it.

"The only way to get good at something is to do it over and over. Practice make permanent — not necessarily perfect because you can practice something wrong and get good at doing it wrong. But the more practice, the better."

In the Real World

The combination of kung fu, kickboxing and jiu-jitsu has prepared Kathy Long well for self-defense in the real world. "I've been in a couple of altercations so far and come out unharmed and unscathed," she says. "It has prepared me beautifully."

To illustrate, she recounts an incident that took place in Texas: "A guy approached me and started asking a lot of questions. As it turned out, he had just gotten out of prison — for what, I don't know. At some point, when I decided I was done with the conversation, I said, 'Well, I'm going now.' When I started to leave, he grabbed me and pulled me toward him and said, 'No, you're not.'

"I used his momentum and grabbed his groin. As he bent over from that, I hit him in the back of the skull with my forearm. When he fell down, I kicked him in the ribs three or four times, then left the scene."

When Kathy Long returned, her assailant was gone, but she called the local hospital and found out that he checked in. "He had a ruptured testicle with internal bleeding, a cracked rib and a slight concussion," she says. "All that happened in about two seconds. All the martial arts I've studied have prepared me for that type of situation."