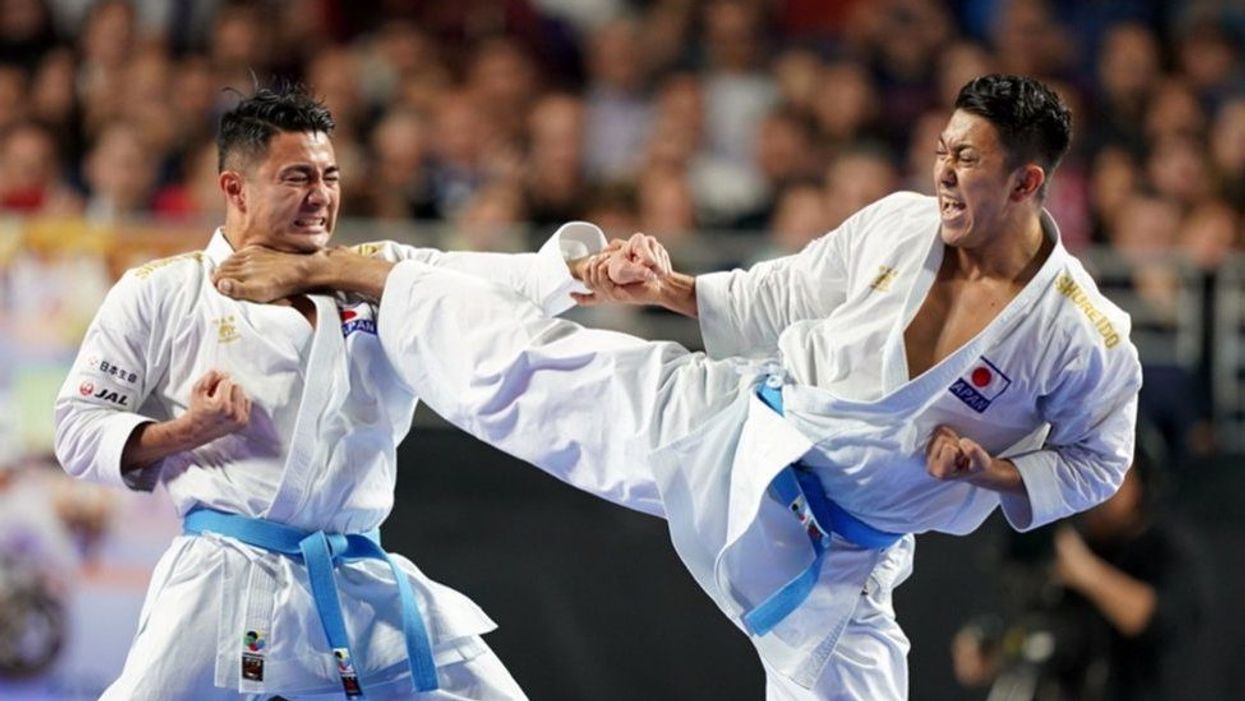 Goju-ryu icon Chuck Merriman analyzes five more karate terms you need to know. Those karate terms are kumite, mokuso, rei, reishiki and sensei, all of which are crucial to advancement in the Japanese martial arts.

In the first half of this article, goju-ryu instructor and Black Belt Hall of Fame member Chuck Merriman discussed five karate terms you should know: bunkai, bushido, dan, dojo and kata. In this conclusion, he addresses five more essential karate terms — kumite, mokuso, rei, reishiki and sensei — that will benefit practitioners of all Japanese martial arts.

Why it matters: Composed of two roots — kumi (grapple) and te (hand) — kumite refers to the instant a fight actually begins. It's when you and your partner first make contact, Chuck Merriman says. “When you think about it, you've got to be standing right in front of each other when you touch. It's important to understand the real meaning of the word to better understand what happens during oyo bunkai."

Why it matters: Practicing mokuso gives you an opportunity to get in the proper mind-set to train, Chuck Merriman explains. “It's not meditation in the sense of going off into another world. It's reflecting on your past training and contemplating the training you're about to do."

Why it matters: “For somebody practicing karate for exercise or sport, rei is merely a salutation," Chuck Merriman says. “These days, people bow by nodding their head and slapping the sides of their legs, but that's not the proper way do it." The bow must come from the abdominal area because that's where the tan tien (the seat of the soul) is. “If rei is 'soul,' obviously the bow has to be done from there," he adds.

Why it matters: “[It refers to] the correct attitude — why you're training and always keeping your mind on the path or way," Chuck Merriman says. For example, you're expected to know and demonstrate proper etiquette in the kohai-sempai (junior-senior) relationship. “Your sempai always precedes you. You open the door and let him go first. Before you take care of yourself, you always make sure he's taken care of."

Why it matters: Because it's composed of the roots sen (before) and sei (life), the literal translation of sensei is “before in life," Chuck Merriman says. “A sensei is somebody who guides another person. For example, if you went to climb a mountain, you'd probably need a guide. Why? Because the guy has climbed that mountain before, and he made it."

It's the same thing with karate. The sensei was once at the same stage of training you're at, and he can show you the way up. If you understand what his role is, you will have a better idea of what you can expect from him and what he can expect from you, he says. “Think of it this way: A sensei is behind you, pushing you forward, not standing in front of you, pulling. Ultimately, it's your responsibility to progress."

Whether you practice for exercise or are a fanatic who's interested in every nuance of the art, it's essential to comprehend the true meaning of the karate terms that describe what you do, Chuck Merriman contends. “If you understand [them], it fills you with a feeling of having something more than just the ability to kick, punch and block." And that's what practicing karate is really all about.

The Meaning of Karate

Some karate students misunderstand even the name of their art, Chuck Merriman says. In the beginning, karate was derived from the characters kara (China) and te (hand), he says, but Japan changed the meaning of kara to “empty." And over time, the hand emphasis of the art's name has been replaced by kicks.

Kicks are more spectacular for spectators, he says, and in tournaments they're awarded more points than hand strikes are. Consequently, students tend to work harder on improving their kicks and less on their hands.

All practitioners should review karate's roots, he says. “I tell my students, 'Karate is empty hand, not empty foot.'"

Read “Karate Terms: 5 Words You Need to Understand," which is the first half of this article with Chuck Merriman, here.