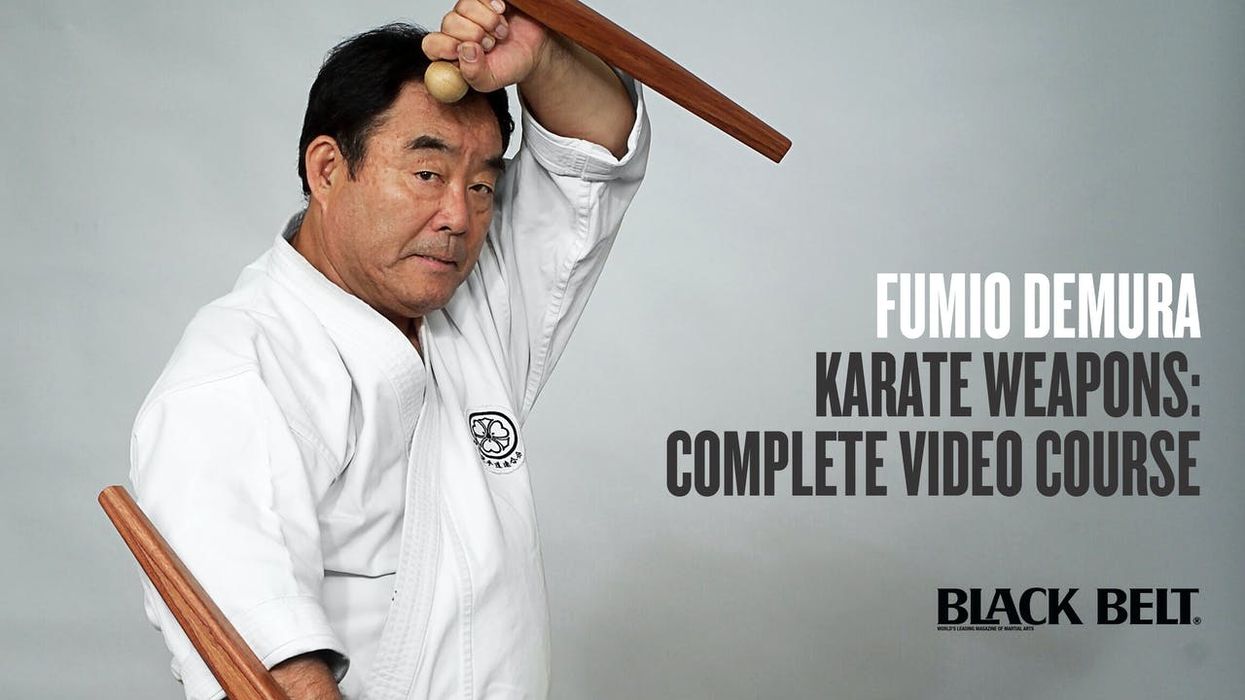 Here's a short article on the long career of the shito-ryu karate and kobudo legend, plus details on how you can learn from the master. See lots of historical pix and a few of his old Black Belt covers!

Fumio Demura, ninth dan, is one of the most highly respected karateka in the world. Born in Yokohama, Japan, he began training during his grammar-school years, studying kendo as a means of building his strength and improving his health. When his teacher moved from the area, Demura transferred to another dojo that taught karate and kendo. He then studied aikido in high school and, later, judo.

While at Nihon University in Tokyo, from which he received a Bachelor of Science degree in economics, Demura developed a special interest in kobudo, including the use of such weapons as the bo, nunchaku, kama, sai, eku bo and tonfa. He honed his technique under the tutelage of Okinawan karate master Kenshin Taira and weapons expert Ryusho Sakagami.

Fumio Demura's reputation as a martial arts champion was secured in 1961, when he won the All-Japan Karate Freestyle Tournament, and he was rated as one of Japan's top eight competitors for the next three years. His many tournament wins include the East Japan Championship, the Shito-Ryu Annual Championship and the Kanto District Championship.

Demura also received the All-Japan Karate Federation President's Trophy for outstanding tournament play and was awarded certificates of recognition from Japanese Cabinet officials for his contributions to the art of karate.

In 1965 Demura came to the United States at the invitation of martial arts pioneer Dan Ivan to teach shito-ryu (itosu-kai), one of the world's four major systems of karate. Within a few years, Demura was educating and entertaining thousands of people at such diverse places as Disneyland, the Las Vegas Hilton and the Playboy Club.

The editors of Black Belt spotted the rising star early on, which explains why Demura scored his first magazine cover in December 1967 (right). The black-and-white photo showed him posing with the sai. The cover story spanned 13 pages.

He was on the cover again for the March 1969 issue (below left). The story focused on the nunchaku — as did the article that accompanied his third cover in February 1972 (below right). Three more cover appearances followed. Two of them highlighted another popular kobudo weapon: the tonfa.

Throughout the '70s, Fumio Demura developed a reputation as an extraordinary teacher of karate and kobudo. Black Belt twice honored him: In 1969 he was named Karate Instructor of the Year, and in 1975 he was Martial Artist of the Year.

In the 1970s and '80s, Demura wrote a series of kobudo books that were published by Ohara Publications, Black Belt's sister company. In the late 1980s and early '90s, he committed his insights to video in a set of VHS tapes produced by Black Belt's Dan Ivan. Later, those video masters were digitized and distributed in DVD format.

Now that most martial artists have moved beyond the limitations of physical media, Black Belt is releasing them as part of Fumio Demura Karate Weapons: Complete Video Course. A full-motion companion to his most recent book (shown at the top of the page), the course streams those classic Demura kobudo videos — which feature the nunchaku, bo, kama, sai, tonfa and eku bo — to your smartphone, tablet or computer. It also teaches 14 traditional kata designed to polish your skills with those classical weapons.

Bonus! Fumio Demura Karate Weapons: Complete Video Course includes an interview with the master recorded in October 2016 at the Black Belt studio. Among the topics he discusses are how karate has changed over the years, what continues to attract modern martial artists to traditional weapons and how you can improve your skills.

September 1968 issue: “The power of the fist does not come from the fist," Fumio Demura says. “It comes from the wrist. I work with the makiwara no more than 30 times a day to strengthen the wrist, but there is still no better way to strengthen the wrist so that the wrist will not give, except through the use of the sai, the short sword and, for those who do not have a sai, push-ups on the fingers. When the fist is strong, it is because the wrist is strong and won't give in an attack."

August 1978 issue: Fumio Demura appears on his fourth cover, this time with the tonfa.

October 1980 issue: Fumio Demura gets his fifth Black Belt cover — without a kobudo weapon, for once.

February 1982 issue: With tonfa in hand, Fumio Demura returns to the cover for the sixth time.

April 2000 issue: Fumio Demura is asked about the new trend of wearing shoes in the dojo. “I would never wear shoes," he says. “Nobody I fight wears shoes. That is the way we grew up. I have been practicing for over 50 years, and it is difficult for me to get used to wearing [sparring] gloves; the shoe issue is no different."

May 2001 issue: It's revealed that Chuck Norris modified the tang soo do he learned in South Korea to include hand techniques he was taught by Tak Kubota and Fumio Demura.

Learn more about his Online Course in the link below!

David Stainko
weapons
Sai is a metal weapon and belongs to a type of dagger which is usually used in pairs, each hand using one. It is similar to a short sword, i.e. a trident dagger, but is traditionally blunt on its top. Its optimal length usually depends on the length of the user's forearm. Most often, its length varies from 37 to 50 cm, as well as its weight which ranges from 1.5 to around 2 kg. Two shorter tines (shields) on each side on the dagger's handle are turned upwards and are used for blocking, catching and breaking the attacker's weapon, for example, a stick, knife, dagger, halberd or a Samurai sword – katana.
Keep Reading Show less

17-year-old mixed martial arts prospect Victoria Lee, the younger sister of ONE Championship titleholders Angela and Christian Lee, carried heaps of pressure into her recent professional debut. Days out from the second fight of her career, which will pit her against China's Wang Luping at ONE: BATTLEGROUND this Friday in Singapore, she's feeling a little more at ease.