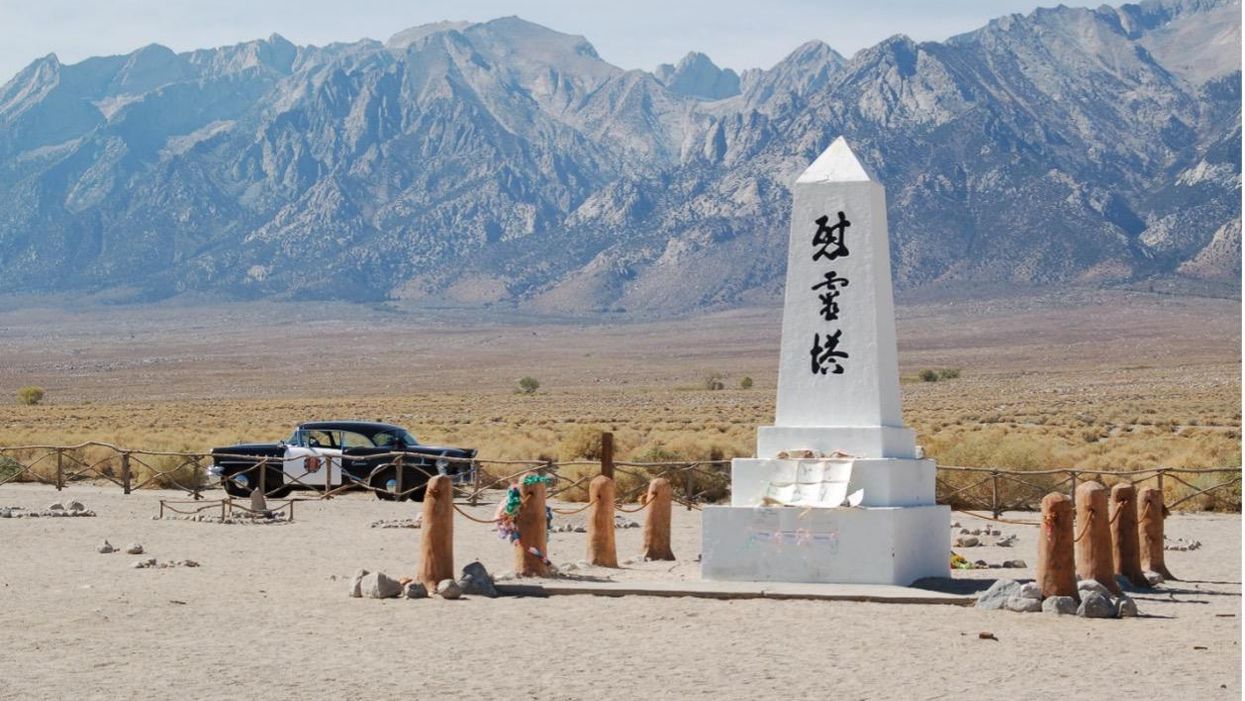 My visit to Manzanar in 2006 while leading a fundraising road trip for the CHP's 11-99 Foundation.

Being a judoka inspired by Bruce Lee at age 10 after and training under the late Kyu Ha Kim, I always respected and admired people of Asian descent. That's why I find it hard to rationalize that the U.S. during World War II instituted a system of internment camps to house Japanese Americans removing them from their homes and neighborhoods.

A few weeks ago my friend judo archivist Jerry Hays gave me a 300+ page historic book on Manzanar.

This stirred my thinking about the recent disturbing uptick in hate crimes symbolic of the unfortunate continued polarization we're experiencing in our country. Asians are now being targeted for racial as well as political reasons.

Anti-Asian hate crimes increased by 150% in 2020 from the year prior, according to an analysis of hate crimes in 16 US cities recently released by the Center for the Study of Hate and Extremism at California State University, San Bernardino. The COVID-19 pandemic has fueled much of this anti-Asian racism and xenophobia.

Jigoro Kano preached world unity through judo. In a judogi we learn to judge people by their character and actions rather than. exterior things such as race, gender, etc.

In reflecting on life for these Japanese Americans at Manzanar, it's intriguing how judo continued flourish within this compound.

Manzanar's judo dojo began in early June of 1942, using canvas-covered sawdust as a mat for the judoka. The dojo wasn't easy to find. It had open sides all around. The internees had a special name for it Shindo Kan because the building was so rickety, shindo means shaking and quaking.

A group of judoka outside the Manzanar dojo

Manzanar was not the only internment camp to have judo. Camps in Tule Lake, California, Crystal City, Texas, Santa Anita, California, Park County, Wyoming (Heart Mountain Camp), Puyallup, Washington (Camp Harmony), Millard County, Utah (Topaz Camp), Desha County, Arkansas (Rohwer Camp), and Jerome County, Idaho (Minidoka Camp) all allowed judoka to begin their own judo clubs. Though some were short-lived and others may not have been as large as the judo club/dojo in Manzanar Camp, judo still proved to be a connective community activity that kept issei and nisei together.

The following month after the formation of the judo platform, new student registration began in Manzanar Camp, bringing in both issei and nisei. In the same month, the camp judoka received "a loaned sum of $250 to construct a judo platform" from Caucasian judoka in North Hollywood, California, demonstrating the importance of the cultural sport to non-Japanese.

150 judoka participated in the opening ceremonies. According to Manzanar Free Press, about 400 judoka were turning out daily for training. In September, the camp held its first judo shiai tournament which outdrew an important softball game in number of participate and spectators. Many of these judoka, both issei and nisei, were students of the art prior to internment.

Jack Sergel, a black belt who taught judo at the Los Angeles Police Academy was accused of 'Emperor worship' because of a photo taken of him and the students reverently bowing at the beginning of class to a portrait of their interned teacher. Sergel's loyalty as an American was questioned by an LAPD review board said he not only had to quit teaching judo at the academy (because they had service weapons and didn't need to 'resort to tactics of the enemy' as an alternative to lethal force), but also that he had to give up practicing judo in his private life or he'd be fired."

In late 1944, Sergel quit the LAPD and went to work for actor James Cagney, who hired him as a judo instructor for an upcoming war propaganda film; Blood on the Sun. The movie's climactic scene was a bout between Cagney and Sergel (playing the villainous Captain Oshima under the stage name John Halloran) crashing through the rice-paper walls of a burning ryokan.

Randori during the nightly workouts in the Manzanar Shindo Kan Dojo.

Footnote – Racial strife and religious prejudice continues to be a recurring theme today.

Rabbi Shlomo Noginski, of the Chabad, a father of 12, has returned safely home after he was stabbed in Brighton around 1 p.m. last Thursday July 1, 2021. A friend says he was able to use his judo training to protect himself and keep the suspect away from children who were nearby, according to NBC Boston.

Click here to view my full talk (title image below).

Judo brings people together by neutralizing differences of race, gender, religion, nationality, language, politics, wealth, education, professions, etc. In a judogi we are all equal. Our love of this sport is the common denominator to build upon friendships, mutual respect, and self-confidence.