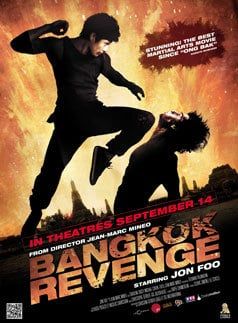 In Bangkok Revenge, Jon Foo plays a character named Manit, who witnesses the murder of his parents when he's 10 years old. The criminals attempt to kill the boy by shooting him in the head, but he survives. However, the resulting damage to his brain leaves him unable to experience normal human emotions.

A martial arts master takes in the youth and mentors him. Twenty years later, his combat skills honed to a fine edge, Manit returns to the scene of the crime in search of justice.

In the meantime, check out the trailer: