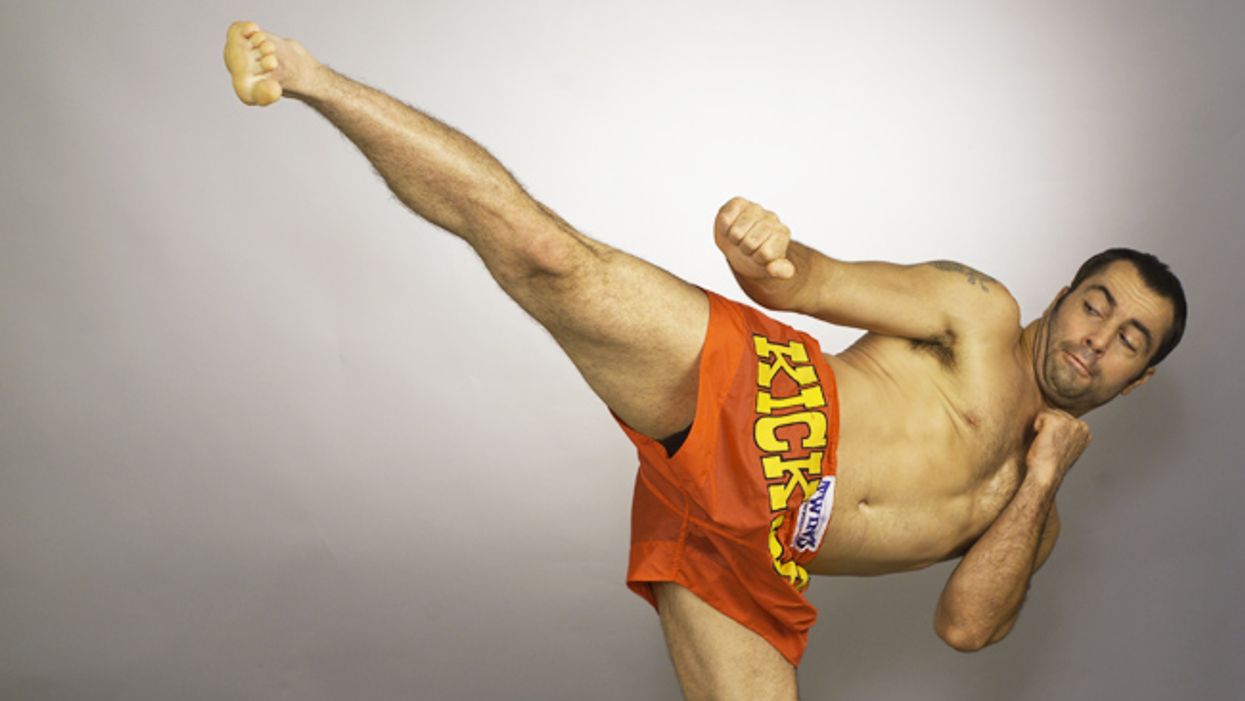 Joe Rogan — stand-up comic, host of the wildly popular Joe Rogan Experience podcast and former star of Fear Factor — talks about the role martial arts have played in his success.

“Brace yourself good because you're probably going to fly on this one." Those are the last words Joe Rogan utters before demonstrating his favorite kick, a spinning battering ram that crams his years of martial arts experience into one painful shot.

The kicking bag I hold chest-high operates more like an airbag — it's a lifesaver. I soar 3 feet backward inside Rogan's home studio, a converted garage complete with wall-to-wall mats, a 170-pound heavy bag bolted to the ceiling and a rack of well-worn grappling uniforms.

Yeah, Joe Rogan, host of NBC's demented reality show Fear Factor, can hit. Hard. He's a former taekwondo instructor and U.S. Open grand champion — which means that after claiming the lightweight championship, he went on to beat both the middle and heavyweight titleholders.

Rogan began competing in taekwondo tournaments at 15 and claimed his U.S. Open title four years later. His instructor first had him fight in the black-belt division when he was a blue belt, explaining to Rogan, “The only way to make steel is to throw iron in the fire."

“I was a kid!" exclaims Rogan, who was born in Newark, New Jersey, and spent his teenage years in Boston. “I went back and forth from being terribly nervous to not being concerned at all to thinking I was invincible. I had all sorts of things swelling around in my head. It was such a crazy thing to do. But I learned so much because of all that. It was such a fantastic experience. I trained hard and I was lucky. I had really great instructors."

Rogan is a self-professed martial arts fanatic. He works out virtually every day and has been doing so off and on since he was 7 — which, he says, is too young to gain the true benefits the arts offer. He owns hundreds of tapes and DVDs of foreign fights, Pride bouts, K-1 kickboxing matches and, of course, UFC events. When he's not hosting Fear Factor or touring the country performing stand-up comedy, Rogan is ringside at the UFC serving as color commentator — a position he's held for nearly five years.

“I'm very thankful there's something around like the Ultimate Fighting Championship that gives a clear idea of what works and what doesn't work in martial arts," Rogan says. “I think what things like the UFC and Pride have done is allow us to actually evolve martial arts for the first time in hundreds of years."

That the martial arts remain at the forefront of Rogan's life despite his work schedule is not surprising. He credits training and the benefits that come with it — discipline, clarity, focus, confidence, patience and objectivity — as being responsible for his success.

“I wouldn't have achieved anything in life without martial arts," Rogan says. “Martial arts was definitely the best vehicle for me to develop my human potential. I developed so much discipline and so much insight about life that I don't think I really would have learned otherwise.

“You can learn some of those lessons from regular sports, but I don't think you have the same heightened sense of danger and the reward for winning. When you win in a martial arts tournament or a professional boxing bout, it is so much sweeter than a win in a basketball game."

After working out with Rogan and listening to him rap about life, fame, society, comedy and combat, one can easily recognize how the martial arts have influenced his personality. He talks like he hits: fast, aggressive, unflinching. Nothing is held back. Every verbal assault rings with a sense of truth and brutal reality, no holds barred. Here's a small example:

Attack: “Do reality TV shows like Fear Factor reflect the collective interest of a culture experiencing a massive decline in values?" I ask.

Counterattack: “This show is as far from reality as one can get," he says. “I mean, they call it 'reality TV' but when in reality are you ever going to have to eat an animal's [penis]? When in reality do you get $50,000 for moving 13 pounds of worms in your mouth? That's not reality; it's just a crazy game show. That's all it is. People who equate this with being a sad state of the world … I mean, people have always been stupid and always will be stupid."

This attitude, a sense of here's-how-the-world-works-and-I-don't-care-if-you-agree, manifests itself most noticeably in Rogan's routines. “There's so many things I talk about in stand-up comedy that most people wouldn't," he says. “I'm not afraid of reality or pointing out things that people normally put in the dark closets of their minds. I open up the attic, and I'm not afraid of the basement. I'll turn the lights on and go running down there, and that's definitely because of martial arts.

“I mean, what's the worst thing that's gonna happen — they're not gonna laugh? Whatever! It's not like they're gonna beat your ass if you're not funny. With fighting, you put your life on the line. It's a lot more difficult."

Rogan owes his comedy career to the martial arts for another reason, one that was born while goofing off with buddies at his taekwondo school in Boston. They convinced Rogan that he was funny enough to be on stage, so he gave it a try.

“[Comedy] really started for me when I was in the locker room," he says. “Fighters sometimes have the funniest sense of humor because they deal with such shocking, dangerous things all the time. They're desensitized."

Rogan knew that comedy fit his personality, but the martial arts gave him the added confidence to stand before an audience and let loose. However, his training forced him into the predicament of having to choose stand-up over his long-time passion. It may have been one of the only times in his life when the martial arts lost. He retired from competition and from teaching taekwondo. He was 21.

“When I was teaching, I did it the best I could," Rogan says. “So when I felt myself starting to get distracted and thinking about comedy and trying to focus all my energy in that direction, I knew there was no way I could do either one of them right. I knew I was always going to train, but as far as competition, there was no way I could do both."

The focus and discipline he learned on the mat would now be applied to the stage.

Eventually, his hard work paid off. At first, Rogan's controversial material forced him to accept lower-profile stand-up opportunities. One night he convinced a Boston comedy club owner to let him test-drive five minutes of new material. Fortunately, talent manager Jeff Sussman happened to be on-hand and liked what he saw. He asked Rogan to relocate to New York. That was the lucky break he needed.

Sussman helped land Rogan a spot on MTV's Half-Hour Comedy Hour. That later produced an offer to act in a short-lived Fox TV series called Hardball. Rogan had not acted before, but again, he knew it couldn't be as difficult as getting pounded in the ring. “Acting is so easy; don't ever let anybody tell you that acting is hard," he says. “Acting is all about not pretending and not choking. If you've fought before, then you know what to do with pressure."

Hardball eventually led Rogan to News Radio, California and fame. Then along came Fear Factor. When he was approached with the hosting opportunity, he balked because he didn't think NBC had the chutzpah to air Fear Factor. Sussman convinced him otherwise.

Rogan figured Fear Factor would be cancelled immediately. How wrong he was. Even reruns still rate among the top-10 shows in the coveted 18-year-old to 49-year-old crowd. Chalk it up to television that appeals to smart and dumb people alike, in Rogan's eyes. He says smart people observe Fear Factor like an anthropology experiment: “Oh my god, look at the monkeys!" Meanwhile, dumb people wonder how they can possibly get on the show.

Success has not fazed Rogan. He still refines his routines at the Comedy Store. As is the case with his martial arts, he relishes the chance to constantly analyze, expand and refine his techniques.

“To be a good martial artist, you have to be objective and look at yourself clearly, without ego," he says. “If you think you're better than you really are and then you overate your skills, you're going to get cracked. You have to know what you're capable of. You have to know your weaknesses, and you have to improve them and make them strengths. That objective thinking totally prepares me for comedy because I'm not afraid of making fun of myself."

He's also not afraid of offering his opinion on the martial arts. He makes it clear that he respects all styles but asserts that what worked once upon a time may not be valid today. According to him, the bottom line is that martial arts are, well, martial. They're about war, about learning how to fight. “If you're going to do it, why not learn the real stuff?" he asks.

Where does that leave kata practice? “It's pretty and it's a good discipline, but it's no better for defending yourself than yoga is." Not that there's anything wrong with yoga — Rogan practices it regularly — but he adds, “Don't kid yourself and think you can fight by doing kata. It's antiquated."

Striking and grappling, specifically Brazilian jiu-jitsu, are where it's at in Rogan's book. And with decades of training and teaching under his black belt, not to mention his up-close-and-personal experience with the UFC, who's going to argue?

“Jiu-jitsu is fantastic because you can go full blast," he says. “You just tap out when you start to [get] choked or get pinned down. In karate when you spar, oftentimes you go at half-speed, so when you get blasted, you're really not used to it."

Still, when it comes to the martial arts, what's effective or ineffective isn't ultimately what matters to Rogan. Although that's been a critical factor in what he's chosen to study over the years, it's the journey itself — the path of self-exploration — that has proved to be the greatest reward. It helped him avoid trouble, formulate his priorities, bolster his confidence and solidify his personality. Fortune has followed — along with one hell of a spinning side kick.

This article first appeared in the December 2002 issue of Black Belt.

Save money and have every issue of Black Belt delivered to your door! Go here to subscribe.

Gerry Chisolm
entertainment
Photo by Kem West
Gillian White has worked in film and television for 25 years — far longer than she's been married to Michael Jai White, whom she wed in 2015. Recently, she's created a buzz in the entertainment industry because of her role as Zara in Take Back, a movie that also stars her husband and teacher, as well as Mickey Rourke. After eight years of hybrid training that includes kyokushin karate and an array of effective fighting styles, Gillian will step into history as the first Black female martial artist to play the lead in an action film when Take Back is released this year.
Keep Reading Show less

Jason Kelly
fitness
www.attacktheback.com
Not many martial arts styles, methods, or forms come with a patented nutritional program to maximize a fighter's health and performance. Gracie jujitsu is not only a form of fighting; it is a lifestyle that fuses the mind, body, spirit, and nutrition to develop the best possible person and fighter.
Keep Reading Show less