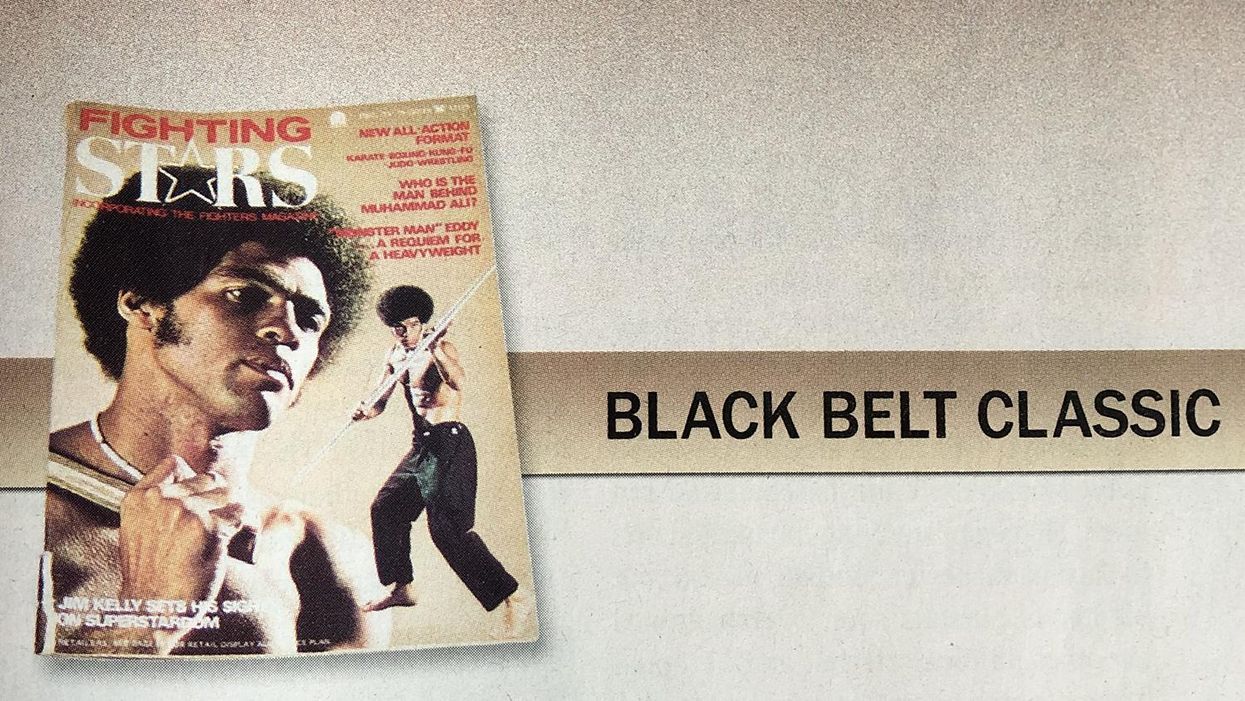 The Co-Star of Enter the Dragon Was Ready to Take on the World in 1975!

This article first appeared in the December 1975 issue of Fighting Stars, a sister publication of Black Belt.

One doesn't interview Jim Kelly; it's more like a confrontation, with the writer firing questions and Kelly kicking and punching back answers.

Kelly is charming, aggressive, witty and blunt — simultaneously. He knows his physical capabilities and is convinced that he'll become America's reigning motion-picture star. Seemingly, he has the equipment to succeed. At 6 feet 3 inches and 180 pounds, he possesses the physical appearance and bold good looks necessary to be a champion of the masses. To improve his acting abilities, he studied with hailed instructors Lee Strasberg and Estelle Harman.

"I used karate as a steppingstone to get on the screen. I used it to get in the front door, and now I just get better in each film," Kelly says. The thespian claims he's "going to make $1 million from karate movies and then get away from them." However, he doesn't say what kind of acting he'll attempt when martial arts movies no longer satisfy him.

Jim Kelly came to national prominence when he co-starred with Bruce Lee and John Saxon in Enter the Dragon, Hollywood's finest and most lavish karate film. It earned a fortune at the box office and established Lee as a major force in world cinema. Most stars must work at their craft for years before getting a chance to perform on the silver screen, but Kelly used his physical prowess to jump over any artistic stumbling blocks.

Born in Paris, Kentucky, and raised in San Diego, California, Kelly attended the University of Louisville on a football scholarship. During his time there, he also played basketball and baseball and ran track. He began studying the martial arts to stay in shape for football season, but his karate pursuits soon overshadowed his other physical efforts, and he opted to concentrate completely on karate.

In 1971 he won the International Middleweight Karate Championship and opened Kelly's Karate Studio in Los Angeles. While teaching and competing in Southern California, he met Hugh Robertson, a director who was preparing a pseudo-martial arts movie titled Melinda. The filmmaker asked Kelly to serve as technical advisor for the production and eventually gave him a small part in front of the camera.

The Melinda role led to Enter the Dragon, in which Kelly played Williams, a character who, along with Lee and Saxon, participated in a lethal tournament held on the remote Han Island. It was all a front for a heroin and prostitution syndicate.

Although Kelly credits Enter the Dragon with propelling him into the public eye, he has a few complaints about the production: "I was killed within the first 60 minutes of Enter the Dragon, and I'm not very happy about that. John Saxon (who holds a brown belt in karate and equivalent rank in tai chi chuan) was supposed to be killed according to the original script, but he had more screen credits than I did, so he stayed alive."

But Jim Kelly's early demise in that movie really doesn't bother him because the entire production belonged to Lee. "It was Bruce's movie, and he's going to look the best because he was the star. Lee even had his own stuntmen who knew exactly what to do when he threw a punch," Kelly explains, speaking with reverence about the style, grace and memory of Lee.

"Lee had an ego as big as Muhammad Ali's. Most people couldn't dig it, but I could appreciate what he had done for himself, his family and his people. Those Chinese [kung fu] movies have done more [for the Chinese] than Henry Kissinger could ever do," Kelly opines.

Apparently, Warner Bros. liked the screen presence Kelly exhibited in Enter the Dragon because the company subsequently signed him to headline his own martial arts film. The result was Black Belt Jones, a rather disappointing combination of karate and satire which was similar to a comic book — filled with gaudy sets, overflowing with unbelievable action, spiced with clichés, completely ridiculous and ultimately harmless.

Director Robert Clouse, who did a superb job on Enter the Dragon, used Kelly's physical talents to some degree in Black Belt Jones, but the movie lacked excitement and cohesion.

But Kelly makes no pretenses about it. "I wasn't interested in a picture with a message — I just wanted to entertain people," he says.

He still has one complaint: He staged all the hand-to-hand bouts and received no screen credit. "It won't happen again!" he recalls angrily. "Now, it's in my contract that I get screen credit."

Jim Kelly also believes the film's stuntmen were unprepared for their arduous job. "I split one guy's skull and broke up another guy's face because they were 'unqualified' to fight me. What I do on the screen is not realistic because I do the opposite for the camera of what I believe in. If people use what they see on the screen for street fights, they'll get killed," he warns.

After Black Belt Jones laid its egg at the box office, Kelly had a small role in Golden Needles. He shrugs this one off, saying, "I play an antique-shop owner and only have one fight over this acupuncture statue which people are chasing all over the world."

Following that, he signed with Jim Brown and Fred Williamson for Three the Hard Way. Despite the film's silly premise — a mad white man plans to wipe out all Blacks by putting sickle-cell anemia in the water supply of three major cities — the action sequences work thanks to Kelly's savage karate techniques and superb timing.

What was it like working with two screen personalities who are rumored to have egos bigger than the Grand Canyon? Kelly says he had no problems at all. "People were afraid of the egos clashing, but they have the ego problems, not me. I learned a lot from them, but I don't want to mention what I learned.

When pressed for a definition of a "Black manly image," he refuses to reply, noting that if he gave an answer for publication, "Then everyone would know."

Since his well-guarded secret of African-American machismo won't be revealed by his words, perhaps Kelly's deeds will give us all a clue. For instance, there's his recent offer to fight Joe Frazier, former heavyweight boxing champ of the world, in a free-for-all kickboxing bout. "His skill is just as deadly as mine," says Kelly, "but I'm a little more deadly."

Kelly has money, a promising career and no broken bones. Why did he challenge Frazier? "I think I'm the baddest dude in the world, and no one can beat me," he says. "Ali is next. As a matter of fact, I could beat Frazier, Ali and George Foreman all in one night." He does concede, though, that he'd need at least a three-minute rest period between each contender.

Despite his star status, Kelly says he still offers personalized lessons to special customers. "I get a minimum of $100 an hour to teach 'The Jim Kelly Method,' and I only teach guys who are black belts. I teach unorthodox karate combinations of all fighting methods. Belts don't mean a thing to me. I don't even wear my belt.

"Also, karate tournaments are a bunch of bull. They're all politics. A handful of non-Blacks controlling the tournaments — cliques, and judges dominated by cliques. I won the [International Middleweight Karate] Championship because of my strong attitude. I just had to be so much better than the others that I couldn't be stopped. My attitude made the difference."

With his film status as a karate luminary, Kelly has his share of female admirers, but he gives them very little of his valuable time. "I discipline myself and play [with the opposite sex] only when I have time. I don't waste my time trying to wine and dine women. I have a girlfriend, and that's all I need.

"I get fan mail, and I find that many of the girls enjoy my screen portrayals and the guys identify with me. My fans usually say they like my attitude, and of course they like my karate. I've even had a few girls come and ask if they can marry me. I always say, 'Not right now.' "

Talking to Jim Kelly is an experience. It's still too early to forecast how successful he'll become, but he'll tell you that beyond a doubt, he's going to be the biggest superstar ever. And in his own words, he'll definitely be an original.

Readers have often written in to ask, "How are karate pictures made? Is there some secret formula? How do they get it all together enough to put it up there on the screen?"

No producers have it figured out better than Fred Weintraub and Paul Heller. Among their many credits are Enter the Dragon, Black Belt Jones, Golden Needles and now, Hot Potato. Bruce Lee brought them a blockbuster at the box office with Enter the Dragon. His style and the formula of the kung fu feature have been widely imitated over the years, but in each of the above-mentioned films Jim Kelly co-starred. His style, his approach to martial arts movies and his fighting technique are his own. True, he shows the influence of Lee, but who doesn't?

Well, to answer the readers' questions, here's how you make a karate movie. You get an ace martial arts choreographer — in this case, black-belt Pat Johnson, to stage the fight scenes. (Note that Jim Kelly staged his own fights.) Then you get Oscar Williams to write and direct. He did Black Belt Jones and is himself a martial artist.

For good measure, you travel to some exotic and glamorous location in Asia — in this case, Thailand. There, you stage lots of action, suspense, kidnappings, double-crossings and ambushes, and you sprinkle in a real bad dude to portray all the evil of the world, some well-meaning Americans stumbling around and a hero and his stalwart friends. Throw in some romance, or the promise of a handy bed about to become actively utilitarian, and roll the cameras.

So that's that. Now let's all get back to work.