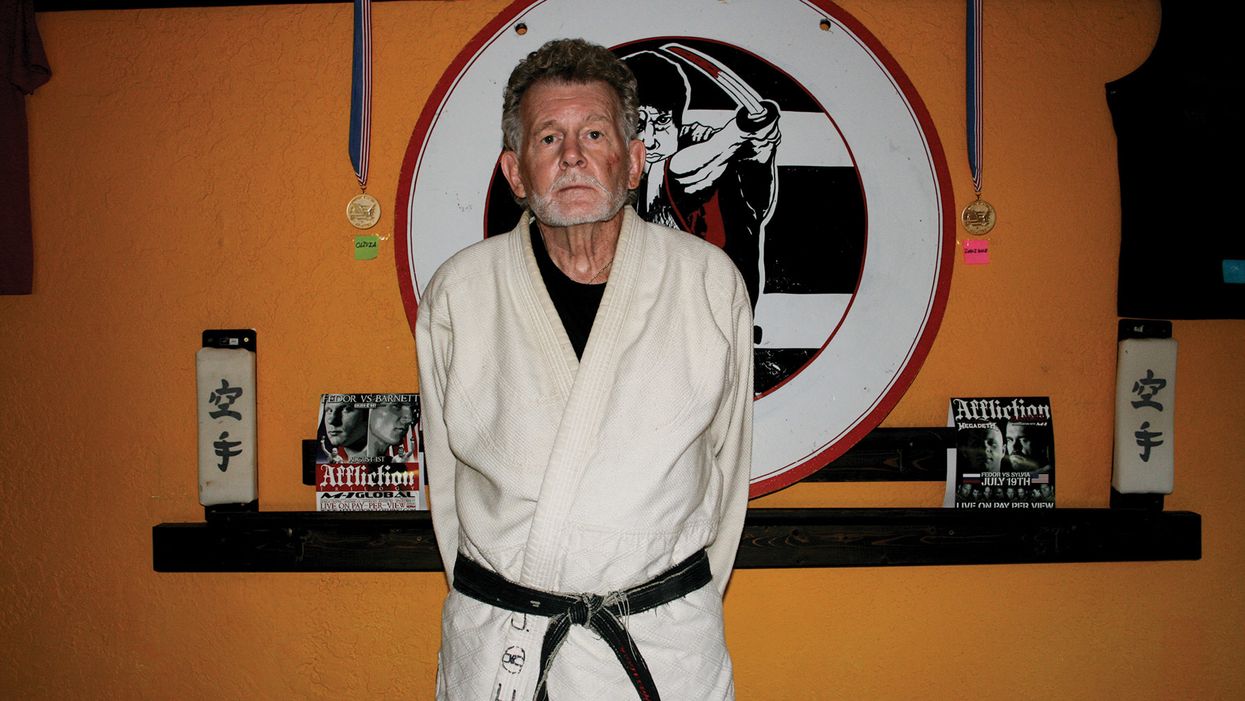 The "Ronin" Followed the Martial Path and Left His Mark on Our World!

Any veteran of the martial arts will tell you that the 1960s were known as the "blood and guts" era of American karate. Chances are that person also will tell you that one of the pioneers of this period — not to mention, one of the toughest fighters ever — was Jim Harrison. Born on December 30, 1936, the man they called "Ronin" built an impeccable reputation in the combat arts, one that persisted until he passed away on February 23, 2020.

Harrison earned the respect and admiration of countless martial artists, and he crafted a career that was as noteworthy as he was. In part, he did that by competing in, coaching and refereeing judo, point-karate and full-contact tournaments. Later, he promoted the first professional tournament in karate history from his dojo in Kansas City, Missouri. He also served his community as a law-enforcement officer and a bodyguard for VIPs. These are just a few of the accomplishments that ensured that Jim Harrison was as feared on the street as he was in the ring.

Beginnings Harrison's formal martial arts study started in 1954 when he took up judo. While training in St. Louis, he earned his black belt under Bob Kurth, a World War II Navy commando. Harrison became a three-time regional AAU judo champion, and his winning ways didn't end with his youth. Case in point: At age 62, Harrison won the National Masters Judo Championship in Spokane, Washington, and placed third in the World Masters Championship held in Toronto.

In addition to the competitive judo skills he gleaned from Kurth, Harrison learned basic striking, self-defense and methods for reading body language, all of which served him well when he worked as a bouncer at the local bars and clubs. Harrison always acknowledged this training as priceless, saying it laid the foundation for his lifelong career in the martial arts.

In the late 1950s, Harrison began training in karate to further his understanding of striking and kicking. His goal was to complement the throwing and grappling skills he'd acquired in judo. In 1964 he earned a black belt in shorin-ryu under Jim Wax. Harrison was so enamored with the striking arts that he went on to earn black belts in shotokan, goju-ryu, kyokushin and moo duk kwan. That eclectic background positioned him to become one of the first Americans to form his own martial art, a conglomerate of the best of what he'd learned. He dubbed it bushidokan karate.In 1964 Harrison moved to Kansas City, where he opened his first bushidokan dojo. Even though he was responsible for operating the facility, he found time to compete in and win titles at some of the most prestigious tournaments in existence, including the U.S. Karate Championship (three times) and the All-American Grand Karate Championship (also three times).

Harrison loved full contact and was known for his bloody battles in the ring. His bare-knuckle karate matches against the likes of Fred Wren, Ed Daniel, David Moon, Alan Steen and Joe Lewis are now the stuff of legend. Chuck Norris, a close friend of Harrison's since the 1960s, once stated, "Jim is one of the toughest guys I know."

One example of that toughness occurred during Harrison's duel with Ed Daniel, which took place at the 1969 Gulf Coast Karate Championship. Both martial artists wound up in the hospital afterward, and a deal was struck to award the victory to the man with the fewest stiches. Harrison won.

Successes In the 1970s and '80s, Harrison was a major force in the American kickboxing and full-contact karate scene. He became the first U.S. light-heavyweight kickboxing champ when he defeated Victor Moore in a bout that took place in Dallas. Despite needing to have a cut above his eye stapled between rounds, Harrison won by knockout.

In 1974 he served as a chief referee for the World Professional Karate Championships held at the Los Angeles Sports Arena. Televised on ABC's Wide World of Sports, the event enabled the nation to watch as he refereed the title matches that helped transform Joe Lewis, Bill Wallace and Jeff Smith into superstars.Also in 1974, Harrison was selected to train a professional karate and kickboxing team composed of Howard Jackson, Bill Wallace, Jeff Smith, Jim Butin and Joe Lewis. Under Ronin's guidance, the Americans went undefeated in 57 matches, beating the Europeans 25-0 in Berlin. Harrison also coached the U.S. team in 1975 and '76, when it was equally successful in Europe. Meanwhile, he served as Wallace's personal coach and trainer, helping "Superfoot" subdue William "Blinky" Rodriguez and other opponents.

As a testament to his coaching skill, it's worth noting that the aforementioned martial arts legends weren't the only people who thrived under Harrison's tutelage. In the mid-'70s, his Kansas City dojo included four kickboxing champions: Jeff Payne (No. 4 PKA lightweight), Ray Patton (No. 6 PKA lightweight), Mark Payne (No. 4 PKA middleweight) and Steve Mackey (No. 2 PKA middleweight and No. 3 light-heavyweight).

Testimonials In 1978 Harrison moved to Missoula, Montana, to pursue his love of extreme sports while expanding his bushidokan system into the Northwestern United States. A proud father, he coached his kids to championship level, as well. Harrison was a true martial arts father to his children, as well as a martial arts father figure to his students. All told, those students have brought home more than 300 medals and trophies from national competitions. Among the successful members of the extended Harrison family is Josh Barnett, a renowned UFC fighter.

In addition to teaching civilians, Harrison trained elite military and police units, including various SWAT teams, the Navy SEALs, Delta Force and the Army Rangers. He always regarded this part of his career as his second-most important endeavor; the most important one was taking care of his family.

Despite all the medals, accolades and accomplishments he accrued during his life, Harrison always insisted that the friendships he built with judo and karate competitors were more memorable. Yes, beating the best was a thrill, but befriending and then earning the respect of the top martial artists was more significant. And earn their respect he did. Legends of the karate community had nothing but praise for Jim Harrison.

Keith Yates first saw him fight in the late 1960s. "Harrison was one tough son of a gun, one of the toughest guys from the '60s."

Bill Wallace echoed those sentiments: "Jim Harrison is one of the baddest dudes I've ever seen. I respect him the utmost, and he is someone I'd always want on my side."

Joe Lewis considered Harrison to be one of the top guns of the blood-and-guts era. In particular, because they both came from a grappling background, Lewis admired those attributes in Harrison — almost as much as he admired the rare quality of honesty. "The boy always told the truth," Lewis said.

J. Pat Burleson likewise harbored massive respect for Harrison. He cited the notion that a black belt earned under Harrison had value just like in the old days. He also said, "Harrison [was] a man's man and never compromised. He did things like they used to, from a time that won't be repeated."

Finally, there's Michael DePasquale Jr., a jujitsu master who grew up among martial arts legends and earned his place alongside them. "You always knew exactly where Harrison stood at all times," he said. "[He was] extremely committed to his family, his friends and the martial arts."

Of course, countless others were saddened by the passing of Jim Harrison. The martial arts community has lost a true modern samurai or, as he might say, a ronin.

Alain Burrese is the director of active defense training for Reflex Protect. He's authored nine books and 11 instructional DVDs, including Survive a Shooting and the Lock On: Joint Locking Essentials series. He has a fifth-degree black belt in hapkido. For more information, visit surviveashooting.com.