Vintage Jet Li: “The One” and the Star’s Enduring Martial Arts Philosophy 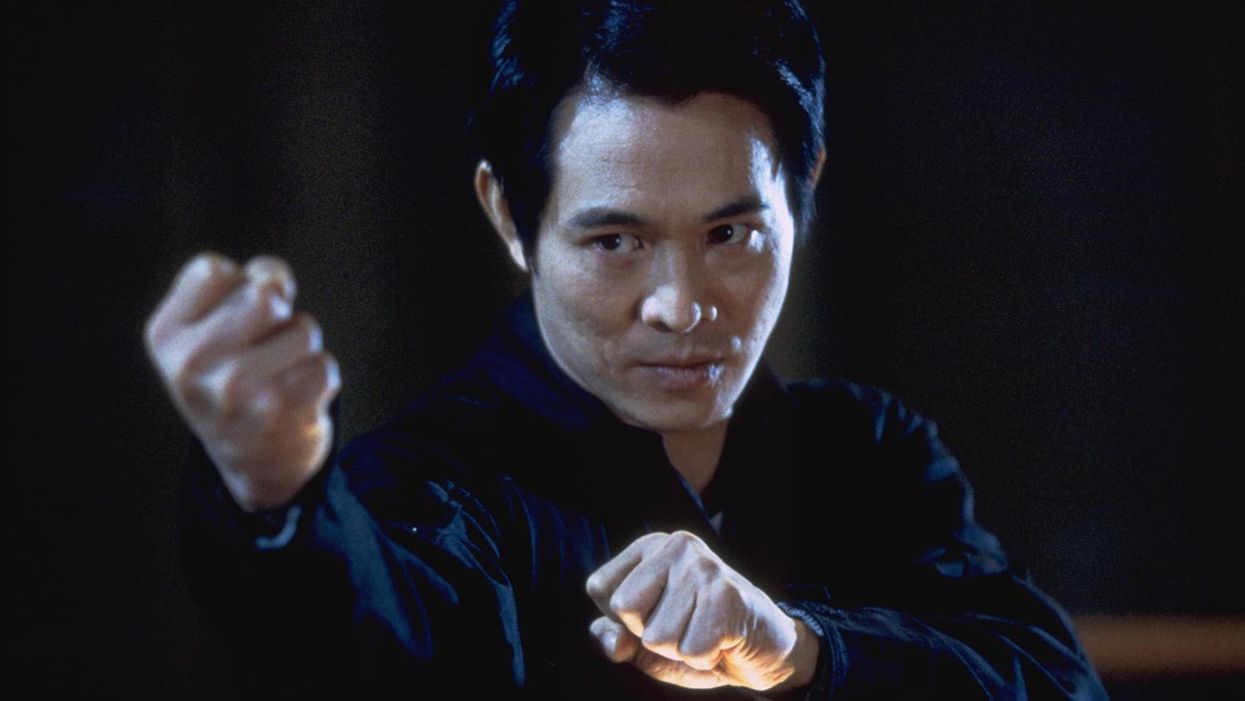 The Deep Thoughts of a Black Belt Hall of Famer

When Black Belt interviewed Jet Li about his hit movie The One, he revealed much about his personal philosophy. Although the film was released in 2001, Li's thoughts on the deeper facets of martial arts and life no doubt remain the same.

Situated atop a 40-foot-high, rickety catwalk, Jet Li looks like a puppet on a string as he prepares for one of Corey Yuen's action-directed stunts. Wires protrude from Li's body in four directions, and as Yuen bellows, "Action," a menagerie of Chinese stunt guys yank on them by leaping off 10-foot ladders or running back and forth in a controlled-chaos tug-of-war. Li and his opponent fly upward and then 60 feet backward in opposite directions. Then, as if being struck by invisible tennis rackets, the two fly back toward each other for their final clash of pugilistic mayhem. Who is Jet Li's opponent in this battle? None other than Jet Li.

Moments later, I'm sitting with Li in his trailer. The most striking image there is a photo of the Dalai Lama. In a way, the photo portends the direction of our talk. I broach the thought that for a man who follows Buddhism, a life of film, fame and fortune might not exactly mesh.

"It's not about having to lead a simple life — although that is one [path]," Li says with a smile. "Regardless of those things, you are still just a normal person. You really are, in the cycle of life, nothing special, and the idea is not to think of yourself as something truly special.

"I can think that I'm No. 1 in the world, or I can think that I'm a normal guy with a lucky life because I'm able to do these films. It depends on how you think and what kind of personality you have. You must always be kind to other people, try to help them and have a good heart."

I ask Li if it's hard for him to have a good heart in an industry where everyone wants something from him to make themselves rich or to improve their status in the business.

"Well, that's the part of life where one must learn," he replies. "I'm not a perfect monk yet; this is why I learn every day. And even though I may not reach my goal in this life, I can still continue to learn and become a nicer person. You may have a name, a house and money, but it is all temporary. When you die, your name is gone, your money is gone. The point is you never really own anything. Everything you have now is an illusion."

Movie stars are expected to gracefully handle all the questions and requests they get bombarded with. That may wear thin the patience of some, but not Li. "If you think about it, it could be tiring [because] I've done this for 21 years," he says. "Hundreds of reporters ask the same questions, and that can make you tired; but when you're a Buddhist, you learn to see things from different angles. I could have retired already, but I want to share [this kind of] knowledge with young audiences. I want to talk about philosophy and try to get people to not hate each other. That is part of my life."

I jokingly apologize that I must now become one of those reporters and ask about The One because, after all, that's why the studio has let me onto the set. He impishly laughs and says, "OK."

The One is the brainchild of the outrageous X-Files writing team of Glen Morgan and James Wang. Pro wrestling pseudo-hero The Rock was slated to star, but when WWF chieftain Vince McMahon refused to let him go, the film's action was destined to take on a more mythical dimension with Li.

The movie's plot revolves around the theory that an infinite number of parallel universes exist in the same space as ours but in different dimensions. The theory also holds that bridges can be opened between them.

In The One, the worlds that exist in some of these universes have joined a futuristic United Nations called Multi-Verse. Because the inhabitants of some worlds have learned how to travel between universes, Multi-Verse has established a police force to monitor for Hitler types and squash them before they get started.

Li plays two characters: Gabe Law ("Good Jet") and Yu Law ("Bad Jet"). Yu is a Multi-Verse agent who, while fighting in one universe, accidentally kills his other self and Highlander-ishly discovers he can absorb the energy of his counterpart. As he travels to other universes and kills the equivalent of himself in each one, he becomes stronger. When he arrives in our universe, he must be stopped by his last self, who is oblivious to what's going on.

What made Li decide to star in this type of film? "I am 'the one,' " he says with a laugh. "Sorry, just joking. Seriously, the script and ideas are very cool, and I always wanted to do a sci-fi film. I like that there are many universes and each one has your life in it.

"When I first saw the script, it was a typical American action/sci-fi movie, but after they picked me up, I said: 'Wait a minute. I like the idea, but we need to do something about the martial arts.' That's because I also want to share information through the characters and physical movements. So we got Robert Kamen (Karate Kid) to rewrite my two characters because he knows the martial arts and philosophy.

"So for each character, we developed a philosophy. Bad Jet only kills 'himselves.' He uses a martial art called hsing yi — [which uses the] attack idea of the shortest distance between two points. He just kills to reach his goal.

"Good Jet is trying to keep his family and life normal, and he doesn't want to become a hero or be 'the one.' So his philosophy is like a circle — like pa kua and yin-yang. He's looking for balance. He must protect his family and his life. The two are a balance unto each other: good-bad, happy-unhappy."

The most interesting part of The One, according to Li, is that Jet fights Jet. The difference between this and other films in which the same actor plays two versions of the same person — such as Jackie Chan in Twin Dragons and Jean-Claude Van Damme in Double Impact — is that you never really see them fight each other, Li says.

"They just act [using a] split screen and play two parts looking where they think the other will be standing but never crossing the line to fight. In The One, with special effects I can hit someone, and he will fly up and fall down in slow motion while I still move fast; but this is done in the same frame, which has never been seen before. It's really cool. And Bad Jet is very powerful and has ching gong(the power to jump high, walk on treetops, etc.) like in old Chinese period-piece films where they can fly."

When Li was a teen-ager training in wushu, did he ever imagine that all those aerial maneuvers he was learning would one day be put to use on the silver screen?

"In my opinion, there are four kinds of martial arts: sport style, filmmaking and TV style, health and treating your body, and self-defense," he says. "When I started, it was for sport. In the beginning, I trained three hours a day doing basic forms and then weapons. Six months later, I became a pro athlete and started training eight hours a day, six days a week — just doing martial arts. Film was never an objective; my goal was to become a champion in hopes of representing my country and then to show other countries what it's all about.

"But with all the basic training you do, you get to a point where the most important [thing] is how to think about your form and yourself, and how to learn something new and different. Of course, after years of doing the physical, it's important to do the internal martial arts. After the internal, you should do chi [training], and after that you must reach into religion and philosophy — which is the aspect that should be most important."

Li waxes philosophical when asked about the trials and tribulations of being a martial arts superstar with a message. "It's not good or bad," he says. "If it happens, it happens. You're born, you become human and you bring nothing. Then you die, you go, you take nothing. You can only use your body for 70 years or so, but your spirit is always with you.

"About being a star, you have to thank the audience because they make things happen, not the studio. And now they have discovered Hong Kong martial arts films. So with all of this, the audience grows bigger, but again it's really about sharing what the martial arts are all about through film."

Throughout the evening I spend with Li, listening to him talk and observing his facial expressions and body language, it suddenly strikes me who he resembles: Bruce Lee. Anyone familiar with my writing knows that for years I've interviewed most of the big stars and filmmakers in martial arts cinema. Inasmuch as they share their cinematic experiences or are anxious to talk about their latest projects, sadly none of them has ever felt the need to talk about philosophy and how that applies to their martial arts, their life and their films.

As the night ends, I mention this observation to Li, and a long, heartfelt silence ensues. At a loss for words, he tries to clear his throat. An appreciative nod later, we shake hands, exchange smiles and part ways. Although Jet may have changed the English spelling of his name from "Lee" to "Li" to avoid cinematic comparison to Bruce, his wheel of life has led to a comparison based not on his movies but on his heart and philosophy.

In a melodramatic sense, perhaps Jet Li is, in fact, "the one."