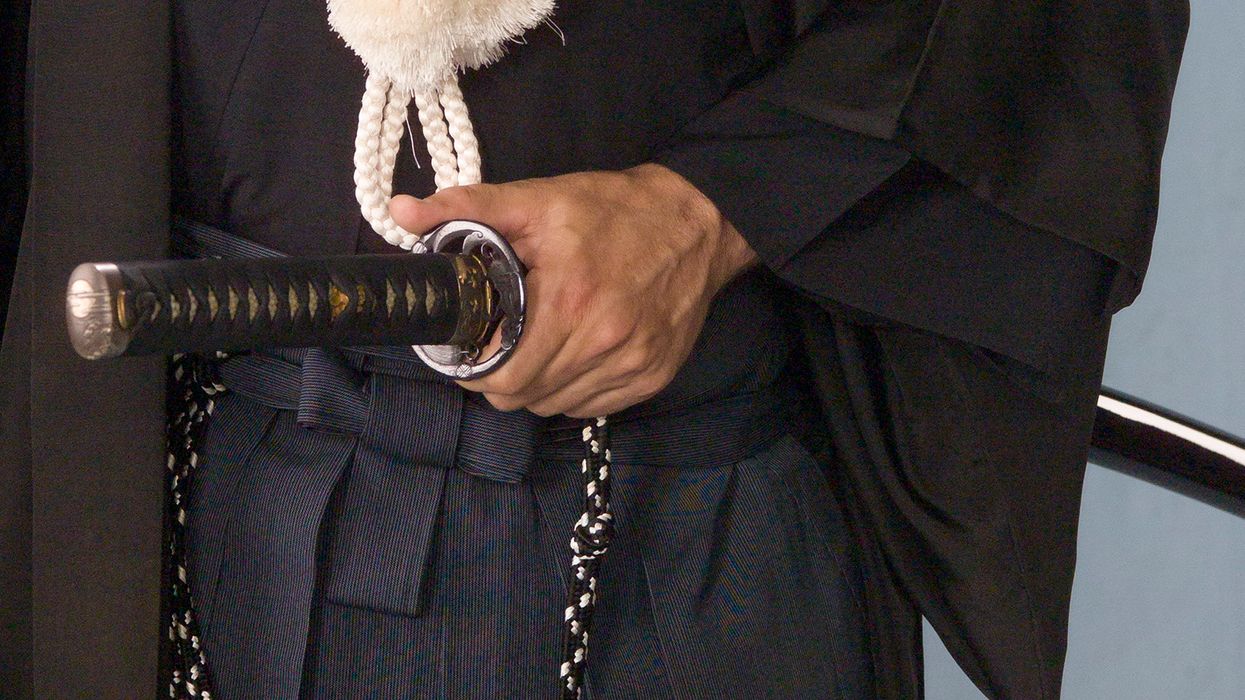 When I moved from Japan to San Francisco in 1971, I brought along a few Japanese swords and bladed weapons. Back then, most Japanese swords in the United States could be purchased for $5 or $10. Sometimes an expensive item such as a daimyo-tachi (feudal warlord's long sword) would sell for $50. A complete set of yoroi (armor) would go for about $200.

The price of swords in Japan was 10 to 100 times more than in the United States. Anyone with a decent knowledge of Japanese weapons could have turned a handsome profit in those days.

More than 3 million Japanese swords are now registered in Japan. Approximately 750,000 are believed to be in the United States. The majority of them were brought here in the late 1940s by American GIs in search of war trophies or souvenirs, and as such, few of the new owners knew anything about the value and age of their acquisitions.

Unfortunately, an undetermined number of swords were damaged or destroyed after arriving on American shores — both intentionally and unintentionally.

The majority of Japanese swords found in the United States fit into one of the following categories:

• Kikai-zukuri gunto, or 100-percent machine-made military swords. They feature an aluminum handle with a serial number and arsenal symbol, and are worth about $75.

• Hantanto gunto, or 50-percent hand-forged military swords. They are often signed with the sword smith's name and the production date, and are worth about $350.

• Manshuto gunto, or Manchurian military swords. They are worth about $450.

Even though serious collectors bypass swords from these three categories, they are still excellent weapons. I often convert their furniture from military style to samurai style for my kenjutsu trainees.

Since most students of kenjutsu, batto-jutsu, iai-jutsu and iaido cannot afford expensive weapons, this option gives them access to reasonably priced swords for training purposes. The total cost associated with buying and restoring such a weapon is about $900.

Ninety-five percent of Americans cannot read the mei (inscriptions) that appear on the tang of a sword blade. Therefore, every time they see kanji characters there, they think it signifies an expensive sword.

In reality, however, the above-mentioned types of swords, which bear markings that indicate that they were made between 1941 and 1945 for military use, are illegal in Japan because they are thought to be of such low quality. If you try to take one into Japan for any reason, it will be confiscated. The Japanese government does not consider them to be antiques because they are less than 100 years old.

There are four additional reasons the Japanese government does not allow importation of these swords:

• They were not produced with the material officially called tama-hagane (iron-bearing sand).

• They were not made using the koshiki-tanren-ho (traditional forging method).

• They were not folded and forged. Instead, they were made from bar stock and, therefore, have no hada (texture) on the surface.

• They were not immersed in water when they were being made. Because they were oil-quenched, no hataraki (a special-effects look that results from the tempering process) is visible.

What weapons connoisseurs really lust after is a sword that belongs to one of the following categories:

• Gendaito: modern swords made between 1868 and the present.

If a sword from one of those categories is brought into Japan, it must be declared on arrival. A registration card will be issued, and without that card, you cannot sell or transport the sword. If a Japanese national is found to be in possession of such an unregistered sword, he can be fined or imprisoned. If a foreigner is discovered, he can be deported and denied re-entry.

Despite the fact that most katana in the United States belong to the “good sword" category, you can still find “superior sword" treasures if you have the proper knowledge. In 1999 I was asked by a senior citizen to appraise a tachi (long sword with deep curvature) at a gun show in San Francisco. While I was examining the blade, he casually asked me how much I would be willing to pay for it. I jokingly said I'd give him $1,000. He accepted, and thus a 1,000-year-old Heian-era tachi became part of my collection.

According to the Japanese government, approximately 25 “national treasure" swords and 45 “important cultural asset" swords have been missing since 1946. The majority of these lost weapons are probably in the United States, just waiting to be stumbled across in someone's garage, attic or storage unit.

Because 90 percent of the swords in the United States are unpolished, it is difficult to recognize the kizu (flaws and blemishes) that may be present. Japanese sword makers have identified 25 kinds of kizu; the five most common are hagire (cracks), fukure (blisters), fukure-yabure (opened blisters), nioi-gire (discontinuous tempering line) and boushi-nuke (lack of a tempered area near the tip).

Sometimes a flawed sword can be fixed by polishing it, implanting metal or re-tempering. If the problem is serious, however, it can render the weapon worthless.

In general, a sword's value is dependent on the status and reputation of the sword smith who created it. Appraisers also examine the appearance, shape, curvature, tempering line, color, texture, cutting tip, outside mount, furniture, body type and classification, shape and color of the tang, peg hole, inscription and the sword smith's stamp and seal.

Evaluating these features is a fine art, one that can overwhelm a person who is not prepared for the level of detail it involves.

Unfortunately, no one in the United States knows the proper way to expertly polish a Japanese sword. That's because becoming a master polisher takes at least 25 years of training and apprenticeship. (However, many student polishers who are the disciples of Japanese master polishers live here.)

On average, a master polisher charges about $55 per inch of the blade. Therefore, the average fee for getting a long sword polished is about $1,000. If you have a good blade but cannot afford a trip to Japan for the sake of its sheen, there are some simple steps you can take to preserve your prized possession.

You will need uchiko (a polishing compound made from crushed stones found in Kyoto, Japan), choji-abura (clove oil), and cotton balls or swabs. The procedure is simple: Mix the uchiko and clove oil to form a thick paste and dab a cotton ball into it, then place the cotton under your thumb and start rubbing. Fingerprints and minor rust can be removed this way, and it is almost impossible to do any damage to the finish.

A freshly polished blade should be protected by a new shira-saya (storage scabbard). The scabbard must be made of Japanese magnolia wood, for if another material is used, it can scratch the blade or allow it to rust.

Obviously, it takes preparation, patience and guidance to locate, purchase and maintain a quality Japanese sword. But once you find one that meets your needs and fits your budget, you will discover why sword collectors of the past and present have been willing to spend thousands of dollars to possess a particular piece of martial arts history.

Story and photos by Harunaka Hoshino

Note: The prices mentioned in this Black Belt Classic article are likely out of date, but the information about swords, sword types and sword care is priceless.

The author and part of his sword collection.

Bonus! A Piece of History

One sword that came into my possession has a unique past. In April 1945 in Iojima, Japan, several soldiers emerged from a cave to surrender to a pair of Americans. One of the Japanese troops was a 6-foot-tall lieutenant who was hiding his military-mount samurai sword behind his back.

When one American stepped within four feet of the lieutenant, he pulled out his katana and sliced his enemy from clavicle to umbilicus. The American's body was split in half, and blood squirted everywhere. The Japanese soldier was shot by the other GI, who had wisely stayed 15 feet behind his comrade.

The sword became the property of the surviving American, who kept it from 1945 until 1987, when I bought it from him. I later found that the inscription on the blade indicated it had been crafted in August 1800. Who knows what other battles it has seen.

Iojima sword purchased by the author.