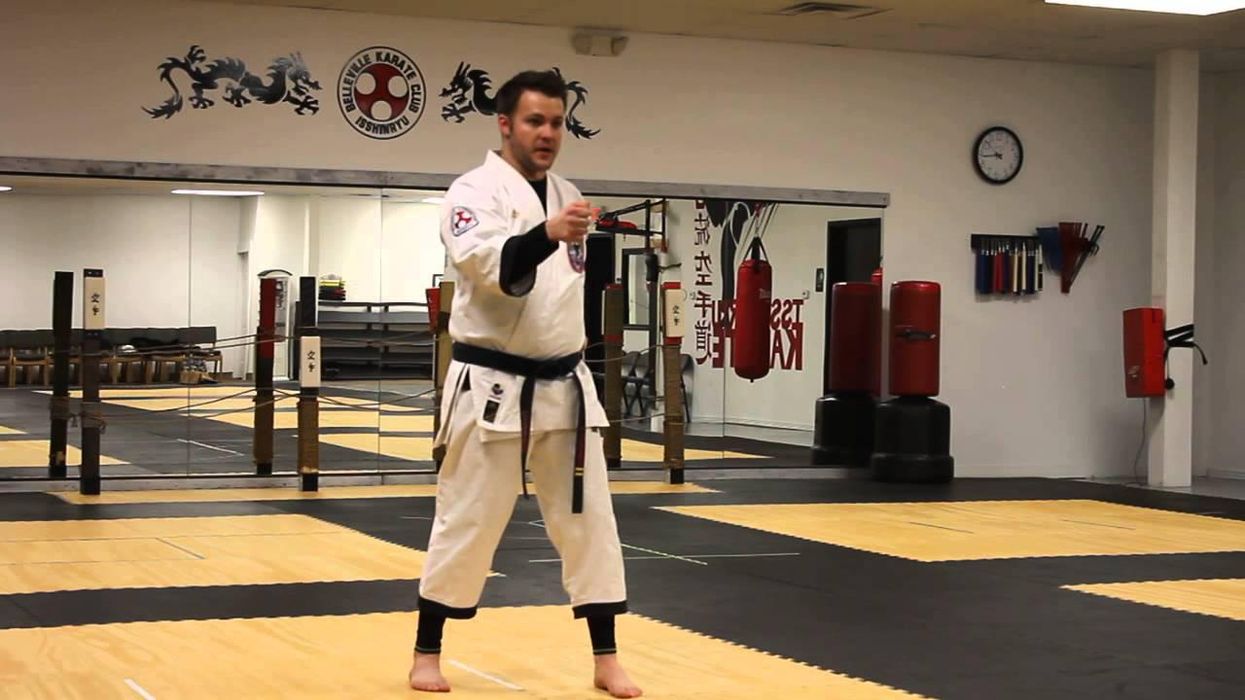 Black Belt featured the fist of isshin kempo founder William S. Russell on its April 1977 cover, along with a two-part feature on his take on the martial arts. Three decades later, we thought readers would appreciate an update on the evolution of the system through the eyes of its current leader, Christopher J. Goedecke.

If isshin-ryu karate, birthed on Okinawa in the mid-1950s, was considered a radical system for its unique karate techniques—like its thumb-on-top fist formation and forearm blocking—then isshin kempo, the American offshoot founded in 1970 by the late William S. Russell, can be considered a radical commentary on mainstream isshin-ryu.

Begin with a bewildering assertion from isshin kempo's current leader, Christopher J. Goedecke: “There are no punches in the isshin-ryu kata." The lanky, articulate sensei says that after nearly four decades of practicing traditional isshin-ryu forms, “the internal structure of isshin kata present immensely rich and layered techniques beyond the obvious kick/punch responses. It has become our challenge to unlock as many of these lessons as possible."

Isshin kempo evolved around several core questions espoused by Russell. Trained in Western boxing with peripheral studies in aikijujutsu, mantis kung fu and the hung system of kung, he believed the early presentation of isshin-ryu kata appeared disparate from actual fighting. He wondered if the gap resulted from a misunderstanding of the depth of its kata by early American followers and wasn't a design flaw. Years of professional boxing lessons with a Golden Gloves champion, a tough teenage street life and his enrollment in a pioneering New Jersey martial arts school prompted him to anchor his forms with more realistic interpretations.

“Russell never doubted the effectiveness of isshin-ryu," Christopher J. Goedecke says. “Like other professionals, he suspected that pioneering American students had simply not penetrated their kata's core lessons. No one expected any U.S. servicemen, in a few tours of duty, to walk away with a full grasp of the teachings of a master with 59 years of experience."

Isshin kempo grew out of William S. Russell's scrutiny of the isshin-ryu karate system he found himself drawn to in his early 20s. Considered a rebel for his radical ideas about turning stress into productive energy, William S. Russell had a physical prowess and curious mind that ferried him through the ranks to eventually helm one of New Jersey's premiere dojo. The Bank Street School, founded in 1962, was a high-ceiling, two-room facility that covered nearly 3,500 square feet. Its teaching roster included some of New Jersey's top instructors: Robert Murphy, founder of isshin shorinji-ryu Okinawa-te; Shimamoto Mamoru, All-Japan judo champion; Gary Alexander, founder of isshin-ryu plus; and Edward Doyle, American-goju headmaster under Peter Urban.

The 1,000-man dojo that William S. Russell built in the 1970s provided grist for his theories about karate's potential to unify the body/mind complex and tap into stores of personal energy. In his 1977 Black Belt feature, he stated, “The principal aim of karate is nothing less than to make its practitioners into complete, fully realized human beings, both mentally and physically—people who can call forth all their resources and use their total capabilities at will."

William S. Russell's system has since expanded into a multifaceted martial art with numerous followers who've stuck with it for more than 20 years. William S. Russell named his fledgling art “isshin" for its kata curriculum and “kempo" for the classical values he infused into it.

“Although Russell's focus later shifted into the motivational and psychological realms, he was a strong kata advocate who planted the seeds for a technical legacy through his keen perceptions of isshin-ryu kata," Goedecke says. “Since its 50-year run in the United States, isshin-ryu karate has gone through some difficult periods of fragmentation with limited reunification. This created technical ambiguities that Russell sought to clarify by provoking intelligent dialogue about isshin-ryu's kata."

Although the language has changed since the 1970s, Christopher J. Goedecke says that isshin kempo's most significant distinction remains that of following the enlightenment traditions of the martial ways. “Our overall objective is to achieve a healthy state of 'no conflict.' This is not a contradictory aim. To understand the nature of conflict, you must find an arena in which to explore it. Martial arts provide the perfect arena. Martial study is ultimately about cultivating peace."

“We do, however, utilize all the isshin kata," Christopher J. Goedecke says. “For most isshin-ryu schools, that consists of eight essential forms generally taught in sequence as seisan, seiuchin, naihanchi, wansu, chinto, kusanaku, sunsu and sanchin."

It's fairly certain from William S. Russell and Christopher J. Goedecke's perspective that the first American isshin-ryu teachers walked away with fairly intact forms but an incomplete understanding of their technical potential. In a brief interview with Christopher J. Goedecke years ago, isshin-ryu authority A.J. Advincula concurred that the early American practitioners “did not know what they had."

Consider also that Tatsuo Shimabuku may not have completed the construction of his own style. The Tennessee-based Buddhist master Arakawa Tenshin, speaking from 45 years of experience, said: “Why would a master of shorin descent, already considered a great master, create another karate ryu almost the same as shorin extraction but intensify its technique to a higher, more scientific tier? He did not need two arts, one in the same, but instead sought to present distinctive aspects of karate-do. Isshin-ryu was meant to become the hierarchy of the shorin-te lines, which he would elevate his black belts to study."

Do internal principles exist in the isshin-ryu forms beyond the esoteric sanchin kata? Were the kata interpretations brought back by postwar servicemen up to par? “Today's isshin-ryu factions align between the ultra-orthodox view that its kata depth was only what Tatsuo Shimabuku presented and, on the flip side, that isshin-ryu kata was an inheritance of a previously complex, principled and dynamic forms legacy of which Shimabuku himself was a student," Christopher J. Goedecke says. “If the latter premise is true, then Shimabuku may either have only partially revealed or partially uncovered all his own kata's lessons.

“We like what isshin-ryu has to offer. Rather than look outside our kata curriculum, we have peered deeper into it. As a result, we consider our system a rebel isshin-ryu."

Does Christopher J. Goedecke believe there are no punches in advanced isshin-ryu bunkai (applications)? He admits to a partial ploy meant to arouse sleepyheaded karateka out of rigid thinking. “Far fewer interpretations of the vertical punch as a fist strike appear in our kata applications," he says.

Isshin kempo practitioners interpret most of their kata's straightforward vertical fists as part of a joint-locking sequence. Christopher J. Goedecke also believes that many isshin-ryu practitioners don't fully appreciate their unique punching equation. “The thumb-on-top hallmark of isshin-ryu fist work was never meant as an absolute punching formula," he says. “And the axiomatic witticism, 'You can't fall up,' often used to describe the merits of a rising punch, falls short of a definitive rationale for punching in other directions. Specific internal principles exist for rising, horizontal and lowering fist strikes.

“One must consider if 'rising punch' is a reference to the arm rising from its waist-high chamber, a reference to the unique 'pop' sometimes seen at the end of Shimabuku's vertical punch or a reference to a rising torso, resulting from extending the legs. All these factors are contributory. The devil is in the details. We've spent years evaluating kata subtleties. We believe Shimabuku was demonstrating multiple rationales to cover both the ballistic and joint-manipulative merits of this action."

Tatsuo Shimabuku's 1966 kata films clearly show the founder “popping" his three punches upward at the end of their extension in the opening moves of the seisan kata. Christopher J. Goedecke believes that current explanations for this action have missed the mark. Subsequently, most isshin-ryu instructors dropped the nuance. He suggests this subtlety isn't a fist strike but rather the actions of a three-step arm-locking maneuver.

“Seisan kata is a master's form with exciting layers of well-formed techniques and concepts," he says. “We never believed that isshin-ryu's first kata revealed something profound with the idea of stepping and punching into an opponent three times. That's a beginner's introduction."

Okinawa's karate history demonstrates an unparalleled expertise in the fist arts. Even the sanchin kata, found in the isshin-ryu, goju-ryu and uechi-ryu systems, developed in China and traditionally performed open-handed, was improvised into a fist form by an Okinawan master. Christopher J. Goedecke claims that wasn't necessarily an improvement over the open-hand version. Rather, it was a cultural stamp on what the Okinawans knew best. They modified sanchin to express the height of their fist art.

Another of Christopher J. Goedecke's insights is that isshin-ryu kata contain an internal infrastructure. “Okinawan kiko (relationship of breath and ki), or more broadly, energy-management techniques, are evident in all the isshin-ryu forms, not just sanchin," he says. “Shimabuku himself used the term chinkutsu or chinkuchi to describe the synergy between the body's biomechanical systems and ki. He even diagramed a particular sequence of muscular contractions for performing sanchin to illustrate the correct distribution of ki. The word 'chinkuchi' translates roughly as 'sinew/bone/energy control.' "

“Shimabuku understood ki and taught energy principles …" and probably recognized these principles in his forms, says Frank Van Lenten, an East Coast goju master who studied with Tatsuo Shimabuku in the 1950s. However, because so few American isshin-ryu pioneers ever commented on this aspect of their art, one wonders if they were fully exposed to it. William S. Russell wanted to broaden the dialogue on those unspoken rebel teachings within his group because he'd experienced firsthand the tremendous power of tapping into the body's internal reservoir. Although the concept of an internal isshin-ryu isn't new to some advanced practitioners, most are unaware of its complex workings.

It's been said that chinkuchi is the essence of isshin-ryu and that the entire system is built around it, and Christopher J. Goedecke agrees. “But until recently you will find little published in support of this statement, which is odd for an attribute of isshin-ryu that has supposedly formed the style's heart and soul," he says. “This material has scarcely been talked about since the founder's death over 30 years ago, even though it's known that Shimabuku was taught ki principles through his shorin mentor, Chotoku Kyan."

The recently emerging details on the subject are more likely the result of our information technology and the maturing of those martial artists fortunately exposed to such seed concepts. Christopher J. Goedecke believes the topic of an internal isshin-ryu is shrouded in ambiguity within isshin-ryu circles. “We are talking about a very rich, very definable facet of Okinawan martial arts," he says. “The subject is far from scant or ambiguous.

If you're looking for an art form, Christopher J. Goedecke says, you'll find it in Okinawan kata. “The essence of the Ryukyuan martial arts has been neatly packaged and passed along to us even though the original intent for many classical forms has been lost in ambiguity. As East Coast uechi-ryu karate master and author Ihor Rymaruk commented regarding our understanding of such esoteric forms as sanchin, 'We may have to reinvent the wheel again.' "

Goedecke reminds his students that all the pieces needed for that reinvention exist in isshin kempo's forms. “It's all in the assembly," he says.

And so the isshin kempo assembly line takes up the kata challenge to strike at the heart of its teachings.

(D.J. DeMarco is a third-generation isshin kempo instructor based in New Jersey.)