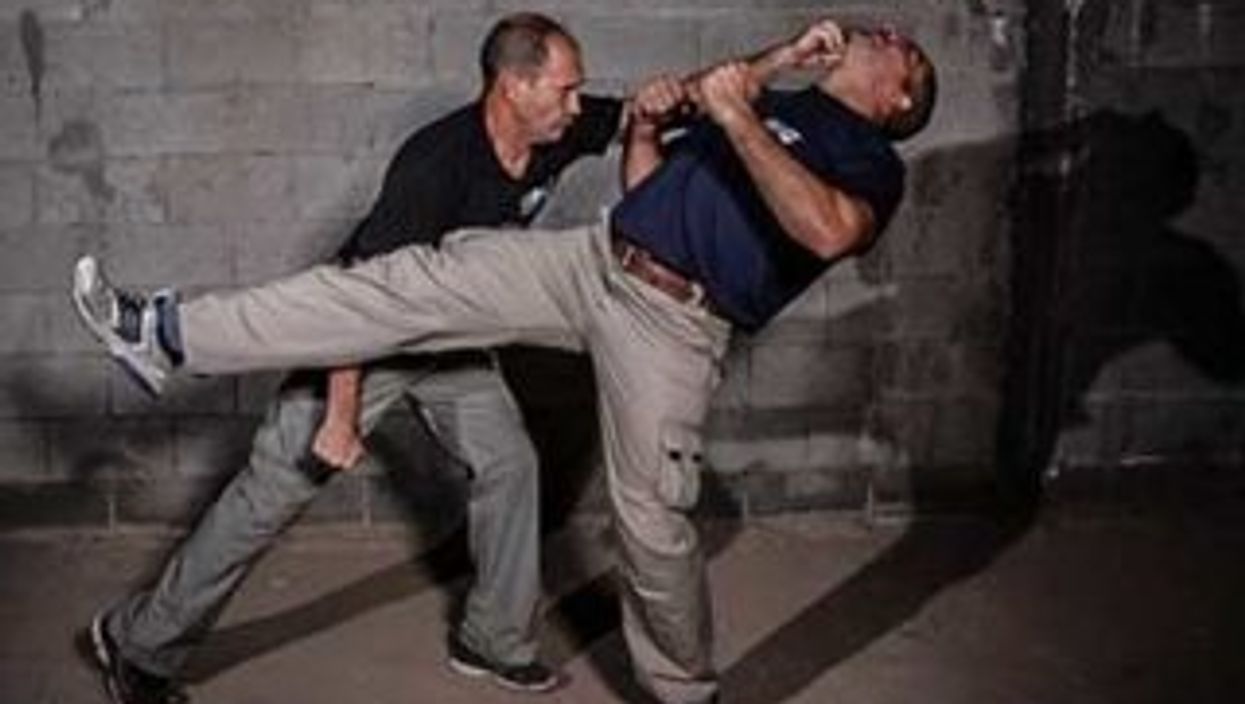 Learn how the Marines are using traditional martial arts principles to mold the combat warriors of tomorrow in this FREE download! MACE (USMC): How the Martial Arts Center of Excellence Produces Fierce H2HC Fighters Through MCMAP

In case further evidence of Eyal Yanilov’s qualification as an Israeli martial arts expert is necessary, know that he is currently listed as “master level 3/expert level 8” in krav maga — the highest rank Imi Lichtenfeld ever gave anyone. The official title Eyal Yanilov carries is chief instructor of Krav Maga Global, the Israeli martial arts organization he founded in 2010 to spread real krav maga to the world — a mission he’s been carrying out since the 1980s. With that goal in mind, Eyal Yanilov recently traveled to Southern California to meet with the staff of Black Belt so he could explain his system’s defense against variations of the front kick. Krav Maga Technique Situation #1: Pre-Emption It goes without saying that the best way to handle an attack — whether a front kick or anything else — is to avoid it. “The first lesson in krav maga is, don’t get into trouble,” Eyal Yanilov says. “But if you do get in trouble, we teach you how to deal with the problem.” A krav maga technique that he prefers to use against a front kick entails counterattacking before your opponent can complete it. “You identify the problem — an attacker is approaching you from a relatively long range,” Eyal Yanilov says. “One option is to run away. If you can’t, you can do a pre-emptive attack.” As soon as you detect the incoming technique, move off the line of attack, he says. That way, even if your follow-up krav maga technique fails, you won’t get hit. Immediately launch a kick — perhaps into his groin — before he finishes extending his leg. Although krav maga technique instructors often demonstrate block-and-counter responses to an attack, Eyal Yanilov prefers pre-emption whenever possible. “We have what’s called the pre-fight or pre-technique,” he says. “The idea is that you should prevent, avoid, de-escalate the problem. Instead of waiting for him to attack you, you attack him while he’s advancing.” Are the associated skill and theory reserved for high-level krav maga technique practitioners? No, Eyal Yanilov says. “We start this almost from day one in krav maga.”
[ti_billboard name="Pre-emption"]

Krav Maga Technique Situation #2: Parry If You Must If you don’t have the advanced warning or range to do a pre-emption, you should employ Eyal Yanilov’s “200-percent defense” principle. “When he kicks, do a hand defense with your forearm to deflect the kicking leg,” Eyal Yanilov says. “At the same time, move your body out of the channel of the attack. Then move diagonally forward until you can reach him with your counterattacks to the face and throat. Then leave the area. Don’t stay in the danger zone. That’s the post-fight [part of the altercation].”

Krav maga expert Alain Cohen shows you how to be a weapon rather than carry one in this FREE download! Krav Maga Security System: How Israel’s Elite Fighters Train

Your counters can range from palm strikes to straight punches. “We specify the best technique for a specific situation, the best solution for a specific problem,” the Israeli martial arts expert says. “The best thing is to understand [your abilities and the situation] so you can have the best performance, and if you’re not able to do your best, you’ll still be able to function and solve the problem.” The krav maga straight punch starts with a vertical fist and rotates to about 45 degrees while making contact, he says. “In training, you may not see a lot of turning because we don’t hit the partner. The turning is only at the end of the strike.”
[ti_billboard name="Parry"]

Krav Maga Technique Situation #3: Sitting in a Chair Although the basic concepts of the front-kick defense don’t change, the details for executing your chosen krav maga technique vary according to the situation. If you’re sitting in a chair when the attacker initiates, you start the same way — with a hand defense and body defense, Eyal Yanilov says. Swing your arm in front of your torso, effecting a redirection with your forearm, and move your body off-line. “When you move, one leg will go a little bit backward and the other forward, making it easy to get up,” he says. Immediately counterattack to the thug’s head with your palms, fists and hammerfists. If you feel so inclined, yank his head down into a rising kick or knee thrust. You can even pick up the chair and use it as a weapon. Krav Maga Technique Situation #4: Defend and Disable From the Ground If you’re sitting on the floor when you’re assaulted — either because you wanted to be there or were knocked down — you should deflect the kick while moving your body out of the path of the foot, Eyal Yanilov says. Again, use the 200-percent defense: 100 percent with your hand deflecting the leg and 100 percent with your body moving out of the way to the rear or side. “As soon as you can, counterattack,” Eyal Yanilov says. “The moment you shift your weight, there’s no longer any weight on your legs, so you can kick with them.” The Israeli martial arts expert’s favorite targets are the back and side of the knee, depending on the orientation of the aggressor. Continue kicking while you get up, he says. “Once you’re on one knee, you either move toward him and continue to attack, or you move away from the danger zone.”
[ti_billboard name="Defend and Disable"]

Krav Maga Technique Situation #5: Lying Down (Worst-Case Scenario) “If you’re lying on the ground, the natural behavior of an attacker will be to stomp on your head or chest,” Eyal Yanilov says. As dictated by the angle of the kick, your hand defense starts with a deflection aimed at the inside of the ankle or the lower leg, which deflects the foot from its path. “Your body defense is a bit more difficult,” Eyal Yanilov says, “but you definitely have to move out of the way. Immediately counterattack to the groin. Before he falls on you, push yourself away by placing your hands on his knees — which also straightens his legs and keeps him from letting them bend and landing on you.” Resume your counterattack with your legs, targeting his upper body, knees or groin. As with all krav maga defenses, you must then decide whether you will continue to counterattack — perhaps to ensure the safety of a loved one who isn’t quite so mobile — or leave the area and seek safety.
[ti_billboard name="Lying Down"]
About the Author: Robert W. Young is the executive editor of Black Belt. For more information about Eyal Yanilov and his Israeli martial arts system, Krav Maga Global, visit krav-maga.com.
From Your Site Articles
Related Articles Around the Web