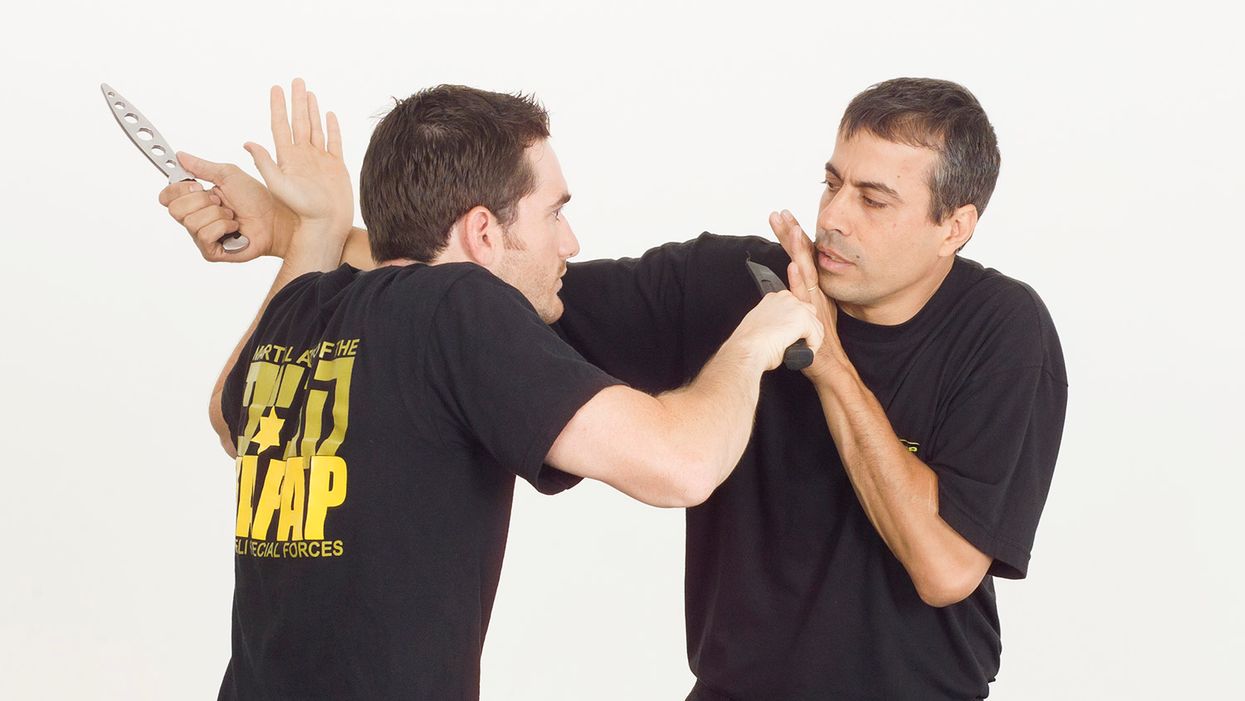 Kapap teacher Avi Nardia draws on his life in Israel, his IDF training and his martial arts experience to offer this advice for combating terrorism as a society and an individual.

For the cover story of the February/March 2015 issue of Black Belt, the editors sent a list of questions to six self-defense and security experts from different backgrounds. Due to deadlines and space limitations, however, replies from only five of them could be included in the print edition of the magazine.

Because we thought it was important to present the point of view of an Israeli martial artist — a person who actually spent a good portion of his life living with terrorism — we saved his advice for our website.

Below are the responses from Maj. Avi Nardia, a former hand-to-hand combat instructor for the Israel Defense Forces Reserve, the Israeli counterterrorism unit YAMAM and the Israeli Operational Police Academy. He now teaches the martial art of kapap, as well as judo, Brazilian jiu-jitsu and krav maga, in the United States. Kapap is also being spread around the world through his book Kapap Combat Concepts.

Should the average person be worried about lone-wolf terrorist attacks?

Terror cells like the Boston Marathon bombers that are not connected by anything other than ideology will become increasingly common. In some ways, lone cells are more dangerous than organized terrorism because lone cells are difficult to monitor and control. The more we go after the big terror organizations, the more they will split into smaller cells, just as occurred with the drug cartels.

Do you think the Internet is becoming the prime tool for terrorist organizations to recruit lone wolves in any part of the world?

The Internet is a major tool today for recruiting, teaching and spreading terrorist ideologies around the globe. The Internet can be used to traffic information and gather intelligence, and as a meeting place for finding others with the same ideas.

Are there any parallels between how terrorists recruit lone wolves and how gangs recruit members?

As high-profile targets get extra security, is there an increased likelihood that soft targets — and civilians — will be attacked by lone wolves?

Nowadays, we are seeing sick people understand that the more brutal their methods, the more their names pop up in the media. As governments and sensitive targets continue to invest in more security, we will begin to see more and more independent terror attacks on soft targets such as bus stations, schools and any place that will instill fear into the public.

In light of all this, what measures can people take to stay safe?

We the citizens first need to push for the government to be less tolerant of terrorist ideologies. We also need to educate the public and law enforcement on terrorists and terror culture. It seems to me that people have too much tolerance for terror — sometimes even the police are more strict on normal civilian criminals than on terrorists who walk free among us. One must study and understand what terrorism is before we decide how to fight it. People must understand how terror feeds from the media.

Is increased awareness the most important precaution a person can take?

Awareness of who lives and walks around us is important, but it is also important that we protect our freedom from pervasive surveillance and a society wherein anyone could frivolously call the police and have a person arrested. Security and surveillance must be approached in a measured manner. We should demand more security in schools for our kids. In and around the home, people need to take it upon themselves to study and train in counterterrorism. You are the first responder, not anyone else, and if you always rely on someone else to arrive, they might be too late.

Do you recommend that people consider lawfully carrying a firearm — assuming they have an interest and have had the proper training?

It's easier to carry a gun in a bag than to carry a police officer. If most normal civilians carry firearms, it will reduce crime as well as terrorism. Switzerland is an example of a country where most civilians own guns, and it's one of the safest places.

In Israel, firearm owners must complete 50 hours of training every year to hold a permit. We have seen many situations wherein the first responders were normal civilians who defended and stopped terrorists before any police cars showed up. We also have civilian police volunteers who get training by the police and carry police identification cards. These volunteers patrol sensitive areas and help prevent crime and terrorism. In my system of kapap, we teach firearms, CPR, surveillance and counter-surveillance as part of martial arts. This training develops awareness and the ability to effectively respond in emergency situations.

How useful could a knife be in the hands of a trained martial artist who's facing a lone-wolf terrorist?

Knives are effective weapons and very important to study. The only problem is that it's hard for a person to use a knife in a real situation. The knife is not a simple weapon unless you are well-trained, and overcoming the psychological barrier of fighting with a knife is difficult for most people. I would recommend learning the gun before the knife. Nonetheless, knives are great weapons and are readily available — such as in the kitchen. Improvised edged weapons, such as a broken bottle, are also great for self-defense.

How is fighting a person who's willing to give his life for a cause different from fighting a mugger, a gangbanger or a rapist?

Most criminals are not ready to die. That simple fact makes self-defense easier because even rapists and other criminals are just looking for easy victims. Terrorists look for any victim, and therefore anyone is a potential target. Terrorists may fight to the death, which makes the fight very difficult to finish. This is why guns are better to carry than knives. A knife will also require one to be close to the threat, whereas a gun allows one to fight from behind cover.

Realistically, what chance does an unarmed martial artist stand against an armed terrorist?

The first rule is to never give up — regardless of whether you are unarmed and whether the attacker has a weapon. You should always maintain your awareness and carry your hand-to-hand skills, as well as your gun-disarm skills. Assuming that an attacker does not have a gun can be a deadly mistake.