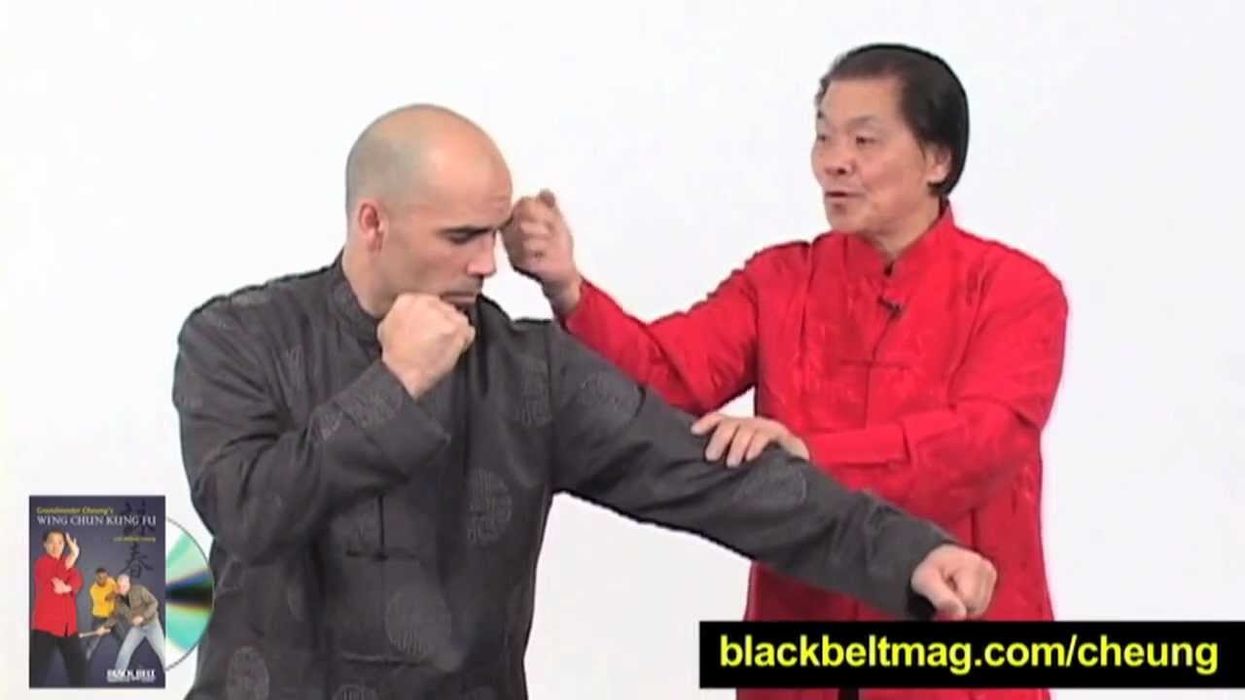 William Cheung and Eric Oram demonstrate how trained wing chun fighters can dominate “the fourth center” for maximum control over their opponents in this informative video!

Is wing chun effective for self-defense on the street? In this exclusive preview from the DVD Grandmaster Cheung's Wing Chun Kung Fu, grandmaster William Cheung and Eric Oram discuss wing chun history and how wing chun techniques developed over time. The kung fu moves they demonstrate focus on what William Cheung calls "the fourth center" -- namely, how trained wing chun fighters can dominate this zone for maximum control over their opponents.

"Before the wing chun system came along, [Chinese martial artists were] using three centers," William Cheung explains. "You [would] protect your center, and then you [would] attack the opponent's center, and [then there would be] the center of exchange. But when wing chun was developed, they said, 'Ahhh. We're doing a 1-2-3-4.'"

William Cheung proceeds to demonstrate the 1-2-3-4 sequence with a series of kung fu moves and explains a pivotal moment in wing chun history. "So they developed a fourth center," the wing chun grandmaster explains. "When you throw a punch, then I can counterattack at the same time."

Using his senior student, sifu Eric Oram, to demonstrate the role of the fourth center in wing chun techniques, William Cheung elaborates on how this development altered the course of wing chun history and elevated the art into an effective self-defense arsenal that is still popular today.

"So when he comes along, I block. I'm facing this point here," William Cheung explains, having moved around Eric Oram's punching arm to the outside of his elbow — which William Cheung refers to as the third center, from which he can readily access an impact point on Eric Oram's head. This would be the fourth center.

"I free up [my] other arm to do the counterattack — so I don't need to deal with [his] other arm," William Cheung explains, demonstrating a strike to Eric Oram's head. "You're using the fourth center to fight on the blind side."

The quick and fluid motion of wing chun techniques in action allows for minute gaps of time during which an opponent's arm, although being contacted by the defender, is still relatively free. Some may ask: Is wing chun effective for street fighting or other close-quarters encounters if the attacker's arm is not secured, pinned, bent or impacted by severe pressure-point manipulation?

William Cheung addresses this concern, deconstructing wing chun techniques as applied to a simple attack/response scenario: "One of the strategies is to control the elbow, so the leverage can control the person's balance. If [the attacker] throws a round punch, I face [the inside of his elbow] — the third center — [and his face becomes] the fourth center. I'm away from the free arm, [but] I'm controlling the blind side from the inside. And then I can still deal with [his other arm]."

So is wing chun effective for fighting opponents in "the real world?" Experience is the telltale answer. Share your thoughts with us in the comment fields below! Sign in and voice your opinion!


Check out these wing chun kung fu books and videos for a variety of awesome wing chun techniques from William Cheung and Eric Oram! Learn more and answer the question for yourself: Is wing chun effective for street-fighting self-defense?