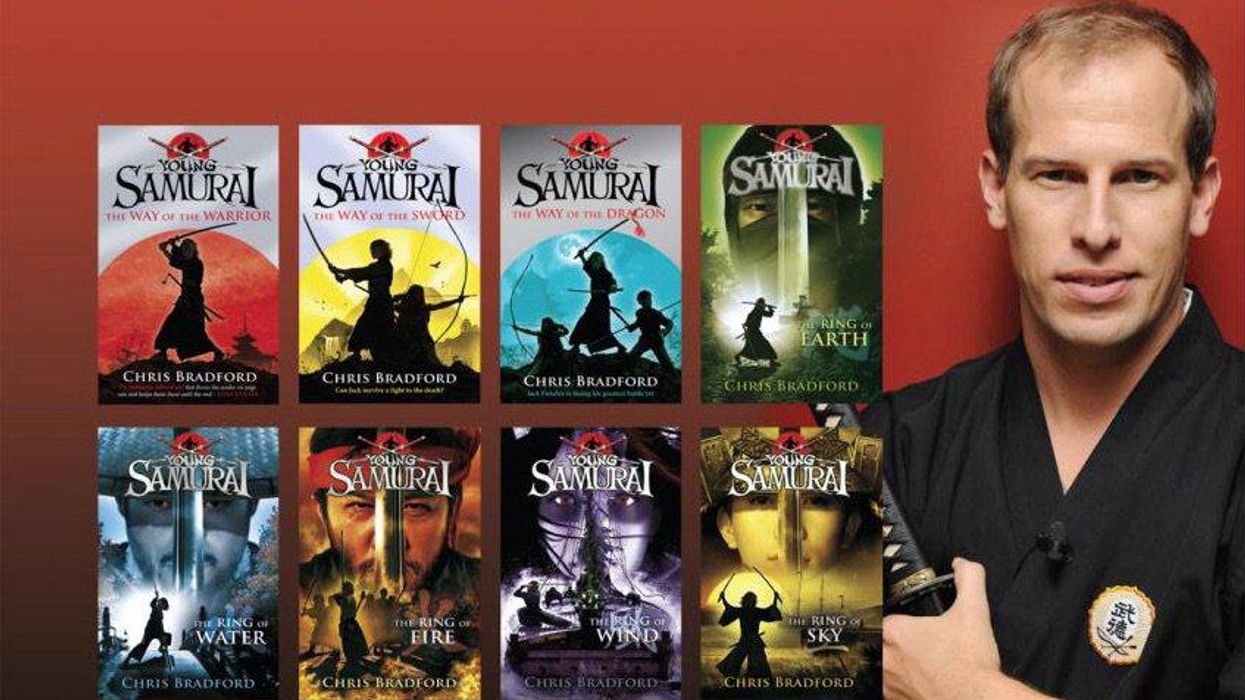 pbs.twimg.com
From the corner of the bookstore, the masked Ninja's steely-eyed gaze bore into me. I didn't want to pick a fight, but compelled by the cover, I did pick up the book. After reading a few passages, I could tell the author knew what he was writing about. The descriptions of the fights felt right. They were so detailed and real. The story moved quickly with vivid scenes, authentic details, and interesting characters. It was cinematic. I could see it all happening like a movie downloaded into my head. I wanted to know what happened next. I bought the book…the Ninja had won the fight.

Since that first introduction to the Young Samurai series, I have been a Chris Bradford fan. But who is the author? Is he a martial artist? Is he a secret Ninja? Well, more on that later. Bradford is an incredibly prolific author with three series of books to his credit: Young Samurai, Bodyguard, and The Soul Hunters. All of the books draw from Bradford's extensive martial arts experience, and his never-ending quest to learn more, and channel it into his action-packed stories. Lucky for me, I caught up with Bradford and was able to ask him all about his process, inspiration, and most importantly, martial arts.

Like many martial artists, the heroes of the silver screen inspired Bradford to study. More specifically, that famous kid with the crane kick, "One of the biggest influences on me, when I was a young kid, was the original Karate Kid. It's why I got into martial arts. I'd already tried Judo, but this rekindled my passion."

Having been a writer in the music industry, Bradford decided to merge his passions and choose a new adventure, which became the Young Samurai series, as he tells, "At the time it was all wizards, spies, and princesses. There was no one offering a martial arts hero. There was no character or role model doing it for themselves. It was all magic. But for me the martial arts is the magic!" Bradford took his idea and wrote his story.

The Young Samurai series follows the main character, Jack, through an incredible martial arts adventure. The series focuses on Japanese arts, but why not Kung Fu or Tae Kwon Do? Bradford explains, "A lot of my martial arts background, apart from Muay Thai, is Japanese based, so I had that grounding." However, there was one missing piece, and he couldn't just make it up, "I needed to do the sword work, so I specifically joined a samurai sword school in the UK to train and get my black belt in Iaido, so that when I talked about the movements and the feel of holding the sword, the sense of when a sword clashes, and the visceral danger, feel and power of holding a sword, I could describe that authentically in the books."

Eventually, the series moves toward the shadowy world of Ninjas. Given Bradford's inclination for authenticity, it begs the question of how one becomes a Ninja? His first visit to the Ninjutsu school could easily be a story all on its own, as Bradford describes, "You had to go into this old broken warehouse of a place, with broken car parts, and then you go up the stairs. You're thinking, "Where the hell am I?" There's this gate, this locked gate, and you have to be let through." Once inside, Bradford describes the secret Ninja lair, "On the top floor, there is this immaculate Ninja dojo. Samurai armor down one side and every weapon you can think of down the other. It was like this martial arts paradise."

Bradford trained under Sensei Peter Brown, learned the Ninpo Taijutsu style, and incorporated it into his stories. Not all authors commit to such a thorough process. Bradford follows a special way of taking his learned martial arts experience and integrating it into his work, a process which he calls, Method Writing, "My Method Writing is two-fold. One, very naturally based in my heart, my soul, who I am, but also specifically crafted for the books."

Well, I guess now you just write some punches, right? How hard can it be? Read on.

With the emphasis on action, one has to wonder if just describing an incredibly brutal battle is enough. What makes a good fight scene? "If they don't have good character development in them, then all of that fighting actually means nothing. It becomes soulless. And that's why you need to have really good characters to lead in the fight, so you got some passion for them. You put something into that character and you want them to survive or learn something from the battle."

For those that may not think of writing as a physical endeavor, Bradford dispels that idea, as he details his process, "If you were watching me write my books, you might think I'm a bit crazy because I'm actually fighting myself in this room. I'll throw a jab. I'll work out the block to that. Once they've blocked me, what are they going to do now? Are they going to throw an uppercut? Are they going to do a front kick? Or are they going to be a bit more tricky? Perhaps be like Ninjas and fling some Metsubushi powder into the eyes? And then what is my character going to do? How are they going to fight blind? That is the secret to my writing method. That is why martial arts infuses my writing like the steel in a samurai sword!"

Are you looking for some action? You can find out more about Chris Bradford, Young Samurai, and his equally action-oriented and martial arts-infused series Bodyguard via his website. (link below).