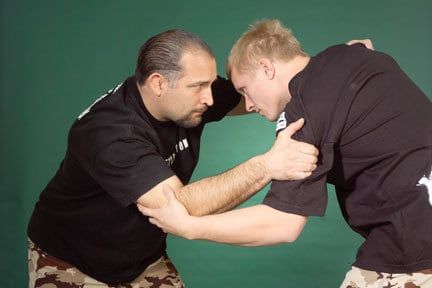 Whether you call it "cross-training," a "hybrid approach" or "mixed martial arts," your goal is clear: to diversify your skills by adopting techniques from other styles of fighting. And to anyone with experience in the martial arts, your reasoning is equally clear: Because nothing is perfect, all systems of combat can be improved. Throughout the history of the martial arts, many masters have recognized this. Bruce Lee was one of them. Sensing the shortcomings of his original art, he studied other styles from the East and a few from the West. He learned new theories and techniques and tested them before creating what's now regarded as one of the premier fighting systems on the planet: jeet kune do. Another pioneer was Imi Lichtenfeld, founder of the Israeli art of krav maga. He developed his system for survival on the battlefield. Like Lee, Lichtenfeld researched various fighting arts and extracted what he believed would be the most relevant for his soldiers. Over time, krav maga developed further, making it functional for police officers and civilians. The newest pioneers in the martial arts are Brazilian jiu-jitsu practitioners. Using the methods the Gracie family learned from a Japanese judo champion, they created what's arguably the most effective grappling system in the world. Can these three successful hybrid arts be improved? Of course. While you're reading this, experts in each art are probably analyzing and fine-tuning their methods. Because my expertise is in wrestling, I'll leave the analysis of JKD and krav maga to others and concentrate on what I know — specifically, on how American wrestling can be used to augment Brazilian jiu-jitsu. [ti_billboard name="The Switch"]

Although Brazilian jiu-jitsu and wrestling are both systems of hand-to-hand combat that are effective on the ground, they use very different approaches. Jiu-jitsu uses fluidity and suppleness, whereas wrestling often relies on direct aggression. Wrestling has a multitude of attacks executed from the standing position, while jiu-jitsu is less well-versed there. Jiu-jitsu exponents strive to master the science of submission and strangulation, while wrestlers focus on subjugation techniques and, if they're into MMA, the ground-and-pound method. There's an ideological divide between the two systems, but are they really at the opposite ends of the spectrum? No. A review of the techniques of both arts reveals how easily they can supplement each other in combat. This article will teach three wrestling techniques that can boost the effectiveness of Brazilian jiu-jitsu. They pertain to common positions in which the jiu-jitsu exponent can find himself. Although the Brazilian art teaches methods of escape and reversal for each position, I'll present new options drawn from wrestling.

The switch is a reversal that starts from one of the least desirable positions in grappling: when your attacker has taken your back. Start on your hands and knees in a base position, and expect that your opponent will have his hands wrapped around your waist in some sort of lock. Your goal is to effect two actions simultaneously: Clear your near hand over your far hand, placing your arms in a position that resembles an "X." Then raise your far knee and pass your near leg under your far leg. Your near hand is now planted on the ground, creating a "post." Your far arm leaves the ground and moves close to your body. Raise your butt off the ground, balancing on your feet and your post (near hand). This motion will allow you to turn your hips 180 degrees and begin the reversal. Note that at the beginning of the switch, your pelvis is facing the ground. If you execute the two aforementioned steps correctly, your pelvis will face upward. The second phase of the switch involves using your far arm to apply pressure to the attacker's far shoulder. This action also creates a fulcrum, allowing you to take his back. To do it, bend the arm you cleared and use it to smash his far shoulder. Quickly extend your arm, reaching your hand deep between his legs to increase your leverage on his shoulder. Your goal isn't to break the lock but to lock his shoulder into a secure position. When you reach into his crotch area, secure your hand on the thigh closest to you with your palm facing up. To create a fulcrum at your attacker's shoulder, continue to place your weight on it. Simultaneously attempt to curl your arm as it's planted on his inner thigh. Your butt is still raised, which allows you to place your weight on his shoulder. The final phase is accomplished by swinging your far leg over your opponent's back in a high arcing motion. The fulcrum you create will facilitate your taking his back. Once you're on top, the reversal is compete. [ti_billboard name="The Inside –Leg Stand-Up "]

Brazilian jiu-jitsu embraces the strategy of keeping your opponent on the ground and finishing him there with chokes and submissions. However, many hand-to-hand combat instructors advocate getting off the ground as soon as possible, arguing that it's especially important if you're the one on the bottom. They teach that the optimal position of control occurs when your attacker is on the ground and you're on your feet. One technique that can help you get off the deck and into a better position is the inside-leg stand-up. Consider it a worst-case-scenario technique for use when the fight has gone to the ground and your attacker has your back. You're in a base position, and your opponent has a lock around your waist. You must immediately explode upward. This process, called "building up," may require tenacious second and third efforts. To build up, you need to execute two independent but related actions. For the first, power up by raising your near leg and planting your foot on the ground a little more than 45 degrees to the side. Look up, then raise your torso so your back and head are vertical. You should be pushing slightly into your attacker, not pulling away from him. As you began to rise, you should have covered his hand with your hands. As your inside leg carries you upward, rise to your feet by "rolling" your far foot. Accomplish that by using an outward rolling motion from your current position of full outside-leg flexion. As you roll your foot and knee, extend your leg and plant your far foot on the ground. Then rise while continuing to push backward into your attacker. The only thing holding you at this point is his hands locked around you. You need to exploit his grip — which you do by pushing back into him while keeping your knees slightly bent and pressing your hips forward. This action puts pressure on his lock and extends his arms. You're now up but not out because your adversary's lock on your waist is preventing you from escaping. To get back into the fight, you have to break free and face him. When you came up on your inside leg, you covered his hands with your own; you must now break his grip. First, move either leg slightly forward while maintaining your balance. Second, move his grip toward the hip that just moved forward. Next, dig your thumbs between your stomach and his inner wrists while thrusting your hips forward. As his arms straighten, his grip will weaken. Cover his top hand and use your same-side hand to pry up his four fingers. Recruit your free hand to lift his other hand. To minimize the chance of being counterattacked, keep hold of his digits as you pull his lock apart and move your hips forward. Place his far hand against your far hip — it's called "putting his hand in your back pocket" — and turn toward it to face him.

The Short Sit-Out and Roll

This basic technique exists in the arsenal of the jiu-jitsu practitioner, but wrestling teaches a variation called the short sit-out. It starts with your opponent at your back with a lock around your waist. You must initiate two actions simultaneously: Cover his lock with your far hand and execute the short sit-out. That entails starting in the base position and sitting on your butt while keeping your head and spine upright. Keep your back toward your opponent's chest. Dig your heels into the ground and push backward to maximize his discomfort. To compensate, he'll attempt to reposition himself by moving forward — which is your cue to roll. As he pushes forward, quickly return to a base position at a 90-degree angle in front of him. Maintain your far-side grip on his locked hand. Some wrestlers execute this move by grabbing their opponent's wrist or forearm so they can create a hook with their elbow when they roll; however, that can telegraph your intentions. The preferred method is to cover the four fingers of his hand and squeeze hard, then use your hips to create a fulcrum under his torso. Your next task is to load him onto your hips. He's pinned there because of your grip on his hand and the outside position of his arm. Holding his hand tight, roll onto your outside hip and shoulder. He'll be forced to roll, as well, and land on his back, leaving you in a more advantageous position from which you can easily dominate him.

Mark Mireles is a freelance writer with more than 25 years of experience in the martial arts. He works as a police officer in Southern California.