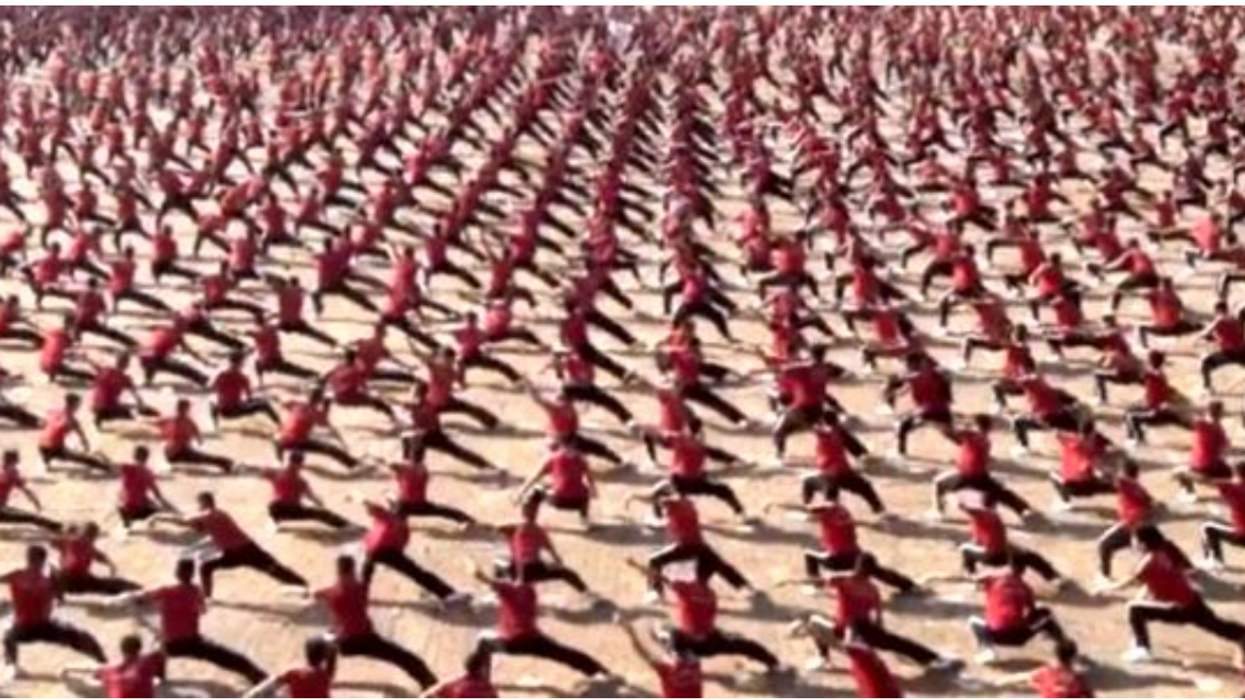 Kata is a form of unique obligatory exercises involving a series of hand and foot techniques of punches and kicks connected by certain moving, and these movements represent a fictional fight against an imaginary opponent. Therefore kata is a defined series of striking techniques suitable for training martial arts techniques. Kata is also choreographed patterns of movements practised either solo or in pairs (practised is also on the team). Solo training of kata is the primary form of practice in some martial arts, such as – Japanese fencing - Iai do. In the martial skills of the East llike judo, aikido, kung-fu, ju- jutsu, tae kwon do as well as karate, the old masters perform these exercises properly to stay in good physical condition. Some movements in kata require from the practitioner an exceptional balance, the others endurance and breathing control. By practicing various kata one used to reach universality, or to exercise different striking techniques and keep good physical condition.

The first well- known kata included Indian ways of fighting eg. nata and vajramushti (lightning fist), the original predecessors of popular yoga exercises that the Indian monk Bodhidharma rearranged and completed with the movements of Chinese combat style, so-called chi-chi. These exercises were formed in order to develop body fitness, raising concentration as well as punch strength of the monks. He completed the exercises in 18 techniques. The essential part in kata has always been the technique and rythm of breathing, which was indicated by Bodhidharma himself. By exercising kata the practitioner had to be filled with a kind of peacefulness, determination, with controlled performing in the strength and speed of the movements enriched with the harmony of techniques of a certain martial art. Breathing is here a very important link between physical and mental moves. For each kata there has - bunkai or certain techniques contained in them. Especially performed kata for beginners or for masters. Although we should stick to certain rules in teaching katas, many masters violate these rules (they determine the number and order of teaching katas).

In judo kata (form) is an exercise that consists of a number of throwings and grips which are performed in strict order accompanied by a strictly regulated ceremonial. There are seven classic kata and one extra for women, but since 1960 there has also been a kata for self-defence. Recently some masters have been performing even eleven katas.

In other martial arts of the East kata exercises usually include from 20 to 50 techniques of punching, kicking and blocking that are performed according to a fixed order and movement lines. Lately, since 1965 there have been competitions in performing kata divided in two categories of exercises: so-called tough ( strong) and soft ( with gentle movements). Later, since around 1974, kata have been also performed with music. In such competitions the judges valuate the total impression of kata performance together with the artistic impression. Some modern forms are performed in tournaments and include gimnastics related elements, such as backflips, cartwheels and splits. Many modern katas can also be performed with various weapons.

It is considered that nowadays there is a huge number of various katas , but the majority of them are not generally used. Some experts think that there are 400 various katas worldwide. Most of the kata were named after some famous master from the past periods of certain martial arts.The ancient masters of martial arts created the kata as a way to pass along their knowledge to future students. Lots of masters agree that the essential kata are t'ai chi chuan (supreme ultimate boxing) in kung fu, sanchin (meditation in motion) in karate or the basic pinan (heian) accompanied by seven already existing in judo and five basic in tae kwon do.

Of interest is the number 108, which has a special symbolic meaning in kata (zen philosophy).

One of the best connoisseurs of tae kwon do forms is Korean (English) master Hee Il Cho.

In kung fu skill we must mention the masters in performing kuen - Al Dacascos and Eric Lee.

Here is the list of some of the most frequent katas (forms) :

Boxing (Kick-boxing, Muay-thai, Savate, MMA,UF) - the fight with an imaginary oponent (shadow fight) two minutes for three times or three minutes for three times (precisely defined sequence of exercises – have elements kata). In Savate there have been recently certain kata accompanied with music (a new version of modern skills, is not related to the old art jeu marseillais – game from Marselle). Old art (game from Marselle, dance – form) is unfortunately forgotten.

Some competitors in martial arts believe that kata practice does not make sense. They consider that kata (form) are not helpful in sport fight. Such an opinion is totally wrong.

Kata exercise has a very useful application in the fight; it is very useful for practicing new techniques, also practicing kata can serve as an active break from hard training.

The fact is that some of the best fighters in his exercise use certain kata.

It is interesting that sometimes masters adapt certain kata to themselves and their style (often the same kata is performed differently in diferent styles). Certainly it is not in the spirit of tradition but the new time imposes new rules. Regardless of the modern way of training, kata will remain one of the most common practice in martial arts. Every few years the number of katas in the world grows. Today unfortunately, performing katas (forms) sportsmen do not execute just to train the skill or to know the technique (bunkai), but to perform it in order to impress the audience, the judges and to win trophies.

It is interesting that no expert in the world in mixed martial science knows all the names of katas, nor their final number. Some stick fighting skills also have kata elements as well as some dance form (basic or old version). One of the funniest kiai is in dance form Haka, but it is certainly kiai.

However, kata exercise will remain ingrained in martial arts forever.