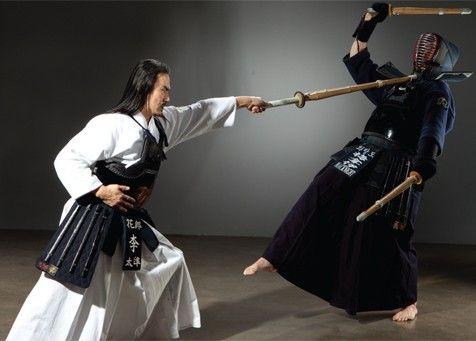 Taejoon Lee then launches into an offensive application of the spin, upping the tempo of his footwork and movements. As the first few strikes are executed, it's obvious he's headhunting, unleashing heavy blows at his opponent, who can barely block in time. After each charge, Taejoon Lee backs off a bit more. Finally, he darts in with speed and ferocity, his weapon held high for a head attack. His opponent lifts his sword in hopes of blocking, but Taejoon Lee is one step ahead. Having drawn the man's weapon upward, Taejoon Lee spins underneath, effecting a beautiful belly strike. "A lot of martial artists say that any spinning technique is turning a blind eye to the opponent — they say that as soon as you turn your back, a straight- line technique will dominate you," Taejoon Lee says. "That's true — up to a point." To illustrate, he spins, and his opponent strikes him easily each time he does so. Point made: Using a blind spin without setting up the technique is a Hail Mary play in combat. Taejoon Lee then shows how the hoi-jeon principle should be used: He deflects his opponent's sword to the side, and by the time the man regains his composure and centerline control, he's already been cut. Mentally and physically, Taejoon Lee breaks his balance, drawing him into a specific reaction and capitalizing on the opening that's created.

A Korean martial arts master and a Hollywood actor meet by chance and make a martial arts cult classic! Get the inside story in this FREE download!
Billy Jack Flashback: How Tom Laughlin and Hapkido Techniques Master
Bong Soo Han Made a Martial Arts Cult Classic

With the modifications Taejoon Lee made to the safety gear, weapons training enters a whole new realm. Angles of attack and defense become less predictable — and more exciting to watch. Best of all, the improvement doesn't apply just to bamboo swords.

“When I first implemented sword fighting, we used the standard kumdo format and I referred to it as kumdo," Taejoon Lee says. “But with the new safety armor and the emphasis on wider technique, we now call it gumtoogi (sword combat) or bongtoogi (stick combat)."

In hwa rang do, impact weapons vie against impact weapons, and bladed weapons vie against bladed weapons because there are major differences in the associated strategies. With a stick or staff, students are allowed to make contact with any part of the shaft. With a sword, however, a cut must use the simulated edge and a thrust must use the tip and target the opponent's throat guard.

“It'd be easy to allow whatever contact to score, but that wouldn't honor the principles of each weapon's strong points," Taejoon Lee says. “Training should honor technique and revolve around principle. Scoring whatever just reinforces sloppy technique and dishonesty."

To that end, the spinning leg attacks effected with a simulated sword must be done with one knee touching the floor, and cuts that target the belly must be delivered from a standing position. Although, in reality, an edged weapon could certainly attack a leg from the standing position or the midsection from the kneeling position, the rule forces students to execute deliberate technique with a greater degree of precision. It also makes each move easier for officials to judge at tournaments, where more points are awarded for high-difficulty techniques such as spins.

To maximize the propagation of gumtoogi and bongtoogi, the World Hwa Rang Do Association has made the new weapons-sparring format open access. “This is a good program for traditional schools to teach applied weaponry with," Taejoon Lee says. “We took what kendo and kumdo brought to the table, used the majority of the targets and equipment, and modified it to allow for a wider expression of technique using a greater variety of weapons — while maintaining safety and emphasizing clear-cut attacks. For those who practice Korean martial arts weaponry, we've created a sparring format that allows them to express the real flavor of their art and develop the ability to attack at angles they couldn't use before."

As hwa rang do moves forward through its fifth decade, it's especially impressive to see a traditional art whose leadership has such a passion for maintaining and preserving ancient combat skills while applying ingenuity to improve the teaching and training methods. Taejoon Lee's commitment to this makes him one of the martial arts trailblazers of the 21st century.

About the Artist and the Art: