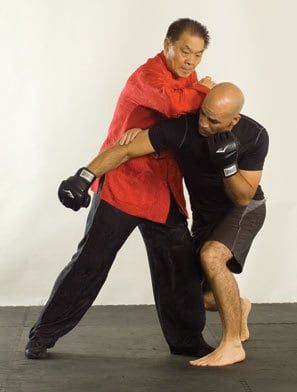 In the martial arts, one school of thought holds that you should change your game to match your opponent's. Example: If you're a stand-up fighter and you're facing a grappler, you should immediately switch into grappling mode. Problem is, that requires you to train to such an extent that each subset of your skills is superior to the skills of a person who focuses on only that range of combat. Your grappling must be better than a grappler's, your kicking must be better than a kicker's and your punching must be better than a puncher's. It's a tough task, to be sure. Another school of thought holds that you should never fight force with the same kind of force. In other words, don't try to beat your opponent at what he does best. Instead, use a set of concepts and techniques that will enable you to nullify his attacks and nail him when he's not expecting it. The best set of concepts I've found is called the science of wing chun, as taught by Black Belt Hall of Fame member William Cheung. It offers a strategic approach to combat that's guaranteed to help any stand-up fighter prevail on the street. [ti_billboard name="Neutral Stance"]

When you're in a balanced wing chun stance, your opponent won't be able to read your intentions because you're not telegraphing the way you'll fight. He can't discern your commitment to any move or to any direction. The stance requires a 50-50 weight distribution at all times. That enables you to move either foot in any direction at anytime. Having maximum mobility, at a moment's notice, is essential for dealing with armed or multiple attackers. Being balanced also conserves energy, which allows you to channel it to other uses while under attack. Once your opponent moves, wing chun teaches that you should immediately shift into a side-neutral stance based on the side of your body he attacks. If he comes from your right, you deal with him by using your right arm and right foot, and vice versa. Your stance is now similar to that of a boxer, except that you're oriented at a 45-degree angle so you're less open to his blows. [ti_billboard name="Balance Disruption"]

In any kind of fighting, balance is everything. Strive to maintain yours while attacking your opponent's. Often, that entails getting him to lean too far into his technique, overcommit to his movement or overextend his body. Without proper balance, he won't be able to move, block or strike effectively. In general, grapplers employ a strategy that involves an overzealous commitment to a move. They'll lean, lunge or throw themselves forward in an effort to take you to the ground, which is their preferred environment. At that point, they'll attempt to mount you and punch, or they'll choke you unconscious. That's all well and good as long as you don't take advantage of their momentary lack of balance

In wing chun, you control your opponent's balance and then deflect his force primarily by controlling his elbow. As Cheung likes to say, if you control his elbow, you can control his balance.

With practice, you can incorporate the principles of wing chun into your self-defense system no matter what it is.

Stay tuned for the continuation of this Web post in "How to Win a Street Fight Using Wing Chun Techniques, Part 2."

Lucy Haro has been a disciple of William Cheung for more than 10 years and holds a black sash in traditional wing chun kung fu. A 17-year veteran of the martial arts, she's also an attorney and entrepreneur.