How to tame your dragon 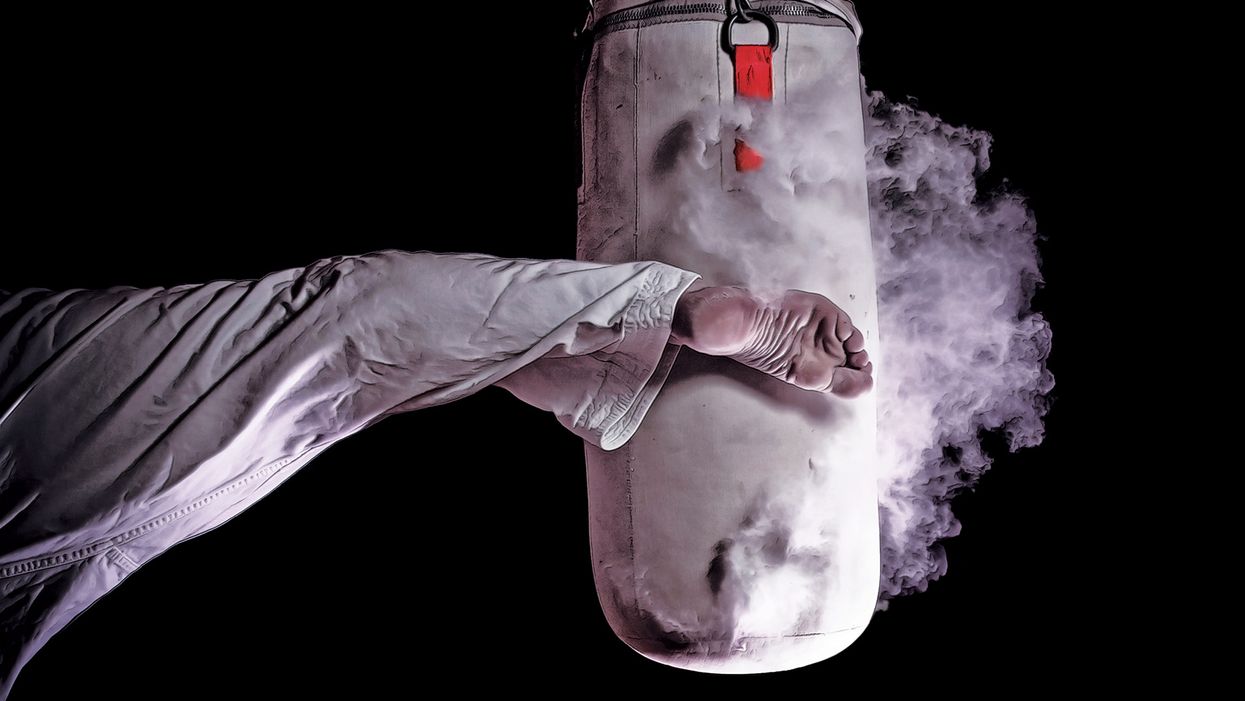 Learn the mechanics and do the drills, then unleash the beast that is your round kick!

Because of its versatility and power, the round kick — known to some martial artists as the turning kick, the saber kick or the roundhouse kick — is one of the most common leg techniques in our world. No matter your particular interpretation, the basics are the same: You swing your leg along an arc until your foot or shin strikes the target.

Unfortunately, that very simplicity can have negative consequences. When teaching students to spar, I often find myself thinking, I get it — you can throw a round kick! How about some variety? Try something else! And when I watch taekwondo in the Olympics, it often seems like I'm observing a round-kick marathon.

Despite its popularity, many martial artists don't have a deep understanding of the round kick. That can prevent them from training properly, using the technique appropriately and maximizing its potential fully. Oblivious to its intricacies, they throw it merely because it's quick and easy to execute.

This article will attempt to remedy that. In the paragraphs that follow, I will break down the round kick and offer insights into the technical details that are necessary to make progress on the path to mastery.

The round kick can be executed in many ways, and as long as it's powerful and fast, there's a good chance it will be effective. The version I prefer derives its power and speed from a precise sequence that starts with the kicking leg being propelled by the hip, then has the knee of said leg extending with a snap as the hip turns over and contact is made.

The most common error I see in the dojang involves students not practicing the kick with a full range of circular motion. Instead, they consistently execute what amounts to a 45-degree round kick. That flies in the face of the philosophy that we all should train to develop maximum power and speed in the full range of motion for a given technique. When that's your default, it's easy to adjust in real time and perhaps throw a shorter-range round kick or one that entails reduced angular travel. Doing less than you've trained to do is easy. However, if you always train for less and occasionally need to do more, you'll likely fall short.

The type of round kick I'm describing can be broken down into four parts, each of which should follow the previous one as quickly as the situation warrants:

The reason you should re-chamber your foot before putting it back on the floor is twofold. One, it affords you the opportunity to throw a second kick or even a third if the first one fails to get the job done. Two, it removes your kicking leg from your opponent's reach, thus preventing a leg grab.

In the martial arts, we often use the word "power" to refer to what scientists call kinetic energy. The relevant formula is: kinetic energy = ½ mass x velocity2

This formula from classical mechanics tells us that if we want to make our round kick more powerful, we can increase the mass of the object that makes contact or increase its velocity.

How do you up the mass factor? One way is to move forward while kicking. That puts more of your bodyweight behind the technique. Another way is to rotate your body toward the target as you kick — in essence, that does the same thing. For the rotation to happen, the foot of your support leg must pivot fully. I tell students to envision a spike holding the ball of their foot in place on the floor. Thus, they must rotate on the ball of the foot with the goal of getting the back of the heel pointing toward the target.

The two most common mistakes I've seen with respect to generating power in the round kick are as follows:

For the velocity portion of the equation, it's essential to examine hip rotation. The pivot of the support foot should cause the hips to turn over so the buttock of the kicking leg points toward the ceiling. This serves to swing the kicking leg more quickly than it otherwise would move. In effect, the hips act as the fulcrum for the lever of the leg while powering its angular motion.

RIGHT: The author demonstrates his preferred method for executing the round kick. From a ready stance, he chambers his leg in a neutral manner while making sure his hands are in a defensive position.

Velocity, of course, is defined as distance divided by time. (It also includes a direction component, but that's irrelevant here.) Time depends on the rotation of the body and the extension of the leg. Distance is how far the kicking foot travels during that time to reach the target. It follows that if you make a larger arc with your kicking leg in the same time it takes you to execute a normal round kick, you'll create a more powerful blow because your foot will be moving more quickly — although you'll sacrifice the element of surprise to some extent. You can mitigate this by setting up the kick so your opponent doesn't notice it until it's too late or simply by making a slightly smaller arc and thus saving time.

WRONG: Don't kick past the target because it makes you more vulnerable to a counterattack, Simon Scher says.

Now that your round kick is powerful and fast, you should consider several other elements in your pursuit of mastery. The first involves your upper body. Many people thrust their lead hand behind them when they throw a round kick — I'm not sure why. That hand cannot be used to defend or to strike when it's dangling there. Some believe that throwing the hand back helps with the maintenance of balance and the creation of momentum. This, too, seems like a poor reason because both can be achieved with proper core training. For these reasons, I believe that the lead hand should remain near your head — between you and your opponent — so it can be used for attack and/or defense.

The next element is the position in which your round kick ends. When executing it, your pivot pulls your hip around, your hip pulls your leg around and your knee pulls the striking tool around. If the striking tool travels more than 2 feet past the imaginary line between your hip and your target, you'll expose your back. That means your opponent can counterattack — or push the leg to spin you around, making you even more vulnerable. Consequently, I encourage students to stop the round kick when their foot is directly between the hip and the target. This forces them to focus the energy of the kick outward toward the opponent, as opposed to around and past the opponent.

A second danger in letting the kick travel too far past the line between your hip and your opponent is that you'll be tempted to stick your buttock out and sit away from the kick. Doing so not only pulls your mass away from the kick but also disturbs your balance and inhibits your ability to deal with the rebound force. This is why I frequently tell students to avoid performing a "big booty kick." Instead, thrust your pelvis forward at the moment of impact to lock your body into the kick.

Crucial in the effective execution of the round kick is foot position. If you're breaking a board with the kick, I recommend flexing your ankle and toes so the ball of your foot strikes the board. In self-defense, this foot position is useful if you want to break your opponent's bones or hook your foot around a blocking tool.

A different foot position is used in the pointed-foot round kick. This is recommended when striking pads, bags or people you don't want to injure — although it can still cause damage. The pointed-foot round kick strikes with the instep or the shin, depending on your art, your target and the amount of hip rotation you use. Examples: For a 45-degree round kick, you likely will make contact with the instep. For a baseball-bat break, you most likely will elect to use your shin.

RIGHT: The best place to position your hands during the round kick, Simon Scher says, is near your head.

Clearly, the round kick is a versatile tool that's relatively easy to throw. However, it requires plenty of practice, especially if your repertoire includes several of the variations described above. To that end, you should develop a training regimen that hones the attributes needed to execute the round kick through the full range of motion.

WRONG: Avoid swinging your arms into positions that don't lend themselves to immediate offensive or defensive use, the author says.

The following are some drills that I've found useful in my students' pursuit of round-kick mastery. You are, of course, free to modify them to suit your specific needs.

RIGHT: Hold a chair or other stationary object for support while polishing the various component moves of the round kick.

Simon Scher holds a seventh-degree black belt in taekwondo and has trained extensively in aikido, tai chi, capoeira, jiu-jitsu, karate, kali, kyudo and sado. His book The Martial Arts Manual is based on his longtime project of creating a line-by-line commentary on Sun Tzu's The Art of War.