How to Do a Shoulder Lock From Inside the Closed Guard | Jean Jacques Machado Shows You an MMA Technique From His New Grappling DVDs! 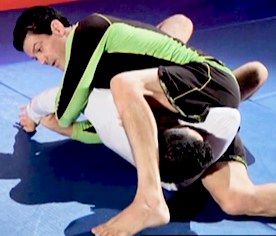 Get inside the mind of a grappling legend as Jean Jacques Machado demonstrats an elegant maneuver for passing an opponent's guard and securing a submission!

Turn the tables on your opponent with this FREE e-book!
4 Submission Escapes From Jean Jacques Machado

In this free preview for the three-DVD set The Grappler's Handbook: Gi and No-Gi Techniques, Jean Jacques Machado explains how to do a shoulder lock from inside the closed guard. "When you are on top," Jean Jacques Machado says, "your first object is to escape from your opponent's legs. And sometimes one aggressive way to submit your opponent might be the best way out from his legs because, technically, he's the one that will be in charge."

As the video switches to the overhead view to clearly depict Jean Jacques Machado's BJJ technique demonstration in action, the grappling expert continues: "But here, in that position, I will reverse that by trying to apply a technique on [my opponent]. If I cannot escape from his legs, it's very difficult for me to improve [my position] or even submit him. I've really limited myself to strikes only. [And] now he can strike and do a lot of joint locks [and reversals]."

Continuing his ground-fighting demonstration, Jean Jacques Machado explains, "I'm basing myself and right away [I] control his wrists and push against the ground. I will turn my body sideways to be able to slide through his leg, and I'm shooting my elbow as far as I can."

The elegant counterattack puts Jean Jacques Machado in position to go after his opponent's arm with enough physical leverage to improve his own situation. "I'm going around his arm and I'm pushing my hip to the side," Jean Jacques Machado explains. "As [my opponent] tries to push me or do anything with his legs, I'm able now to retreat here and be on his side. Not only that, now I have his arm in a submission position here."

Not only does the Brazilian jiu-jitsu red belt hold his opponent's arm in a submission position, but he also can bring his leg over the opponent's head for maximum domination. And the entire process started with a very simple idea. "By attacking him instead of him attacking me," Jean Jacques Machado explains, "I put [my opponent] in a defensive situation [in which there's] not much he can do. [There will] be a surprise element there. And it will succeed with a submission — and, for sure, passing his guard."