The Front Kick: How to Do It, When to Use It 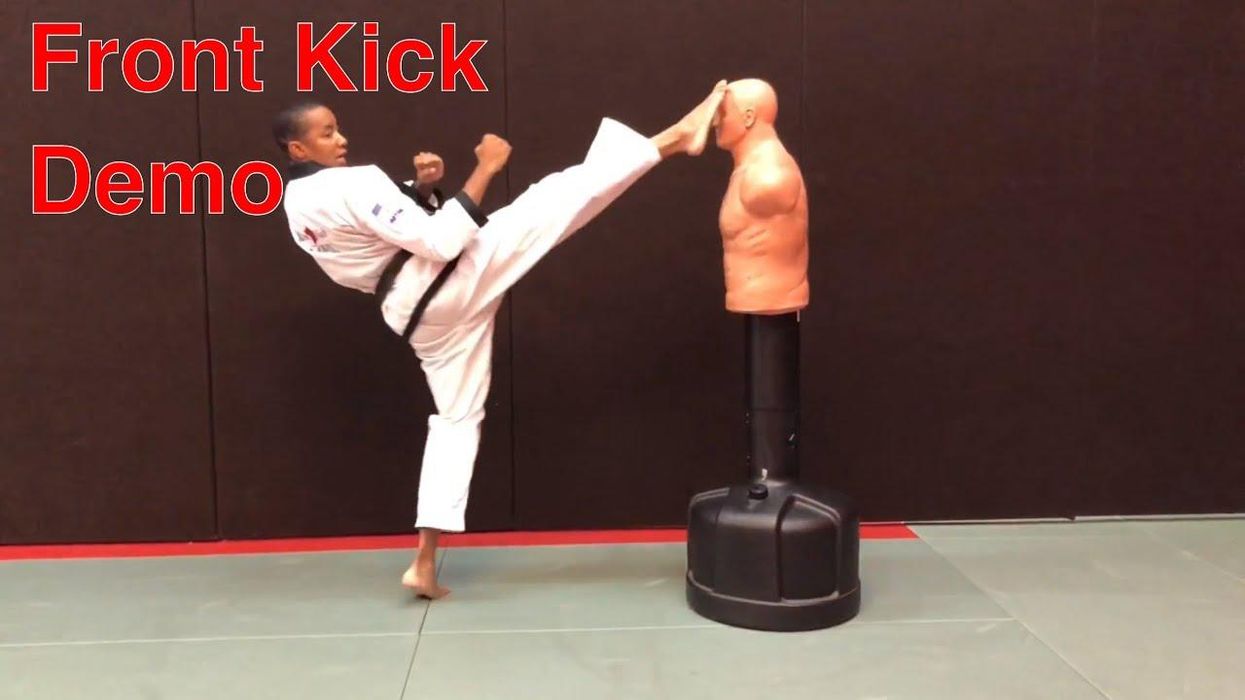 It's one of the first kicks beginners learn when they take up the martial arts, but that doesn't mean it's only for beginners. Done right, it's among the most effective sparring and self-defense techniques known.

It is perhaps the most basic martial arts technique of all, the front kick. In one form or another, it's a component of almost every system. Often the first kick introduced to novice students, it doesn't require exceptional balance or flexibility. Yet when executed with sharp, focused power, it quickly realizes its full potential.

The front snap kick doesn't involve the hips as much as the front thrust kick does. As a result, kickers don't have to compromise their balance by shifting their center of gravity. This means they can quickly step in with a follow-up technique or retract the leg to its original position.

The front thrust kick is the more powerful of the two variations. It uses not only the snap of the lower leg but also the drive and follow-through of the hips. As with the front snap kick, the knee is brought up quickly. But to recruit more power, the knee lift is preceded by a thrust of the hips. This motion brings the largest muscles of the body into play, and instead of producing a snapping impact, it generates penetrating, disabling force.

With either version, the point of contact is usually the ball of the foot, although there are exceptions. Some systems such as uechi-ryu use the toes instead of the ball. Naturally, this demands an extraordinary level of conditioning, but because the contact point is smaller, the kick imparts a sharper, stabbing pain.

The heel and instep also can be employed, with the heel most often used for thrusting kicks and the instep for groin kicks wherein the foot travels upward to strike the genitals. For the most part, however, the ball of the foot is preferred, particularly when bare feet are involved.

The front kick can be delivered from the front or rear leg. Kicking with the rear leg is more common and more comfortable for most practitioners. The rear-leg front kick is a natural motion; it's easier for kickers to shift their balance and put their weight behind the kick. The rear-leg kick, especially from a relatively deep stance, often enables kickers to crash right through an opponent's block.

Some people produce even more power by altering the kick's angle. Rather than chambering the knee directly to the front, they cock it slightly to the side. As the knee is lifted, the supporting foot pivots and the lower leg shoots into the target at a 20-degree angle. This variation should not be confused with the 45-degree roundhouse kick that many taekwondo competitors use. Although the angle appears similar, the contact area for the angled front kick remains the ball of the foot and not the instep.

The lead-leg front kick is quicker but considerably less powerful than its rear-leg counterpart. Its main use in self-defense is as a stunning setup technique that off-balances an adversary and paves the way for heavier blows. It's also used in free sparring primarily as a range-finder and setup technique.

Competitive taekwondo fighters use a variation of the lead-leg kick as a stop-kick to keep an opponent from advancing. Because the opponent is wearing a body protector, penetration is not the objective; freezing a foe in his tracks is the main concern.

Thai stylists also use a similar front-leg kick to probe an opponent's defenses or push him away. An apt analogy for the lead- and rear-leg front kicks likens their form and function to the jab and rear cross of boxing, with one setting up an opponent and the other finishing him off.

Despite the prevalence of high front kicks in forms competition, the best targets are the solar plexus and ribs. The head isn't a feasible target for a number of reasons, not the least of which is the trajectory of the kick itself. The path for a well-executed kick goes straight ahead, not upward. And an opponent's body is in front of the kicker — not suspended above him.

Therefore, it's incumbent on kickers to kick into their target. This is perhaps the most common mistake practitioners make. Instead of trying to nail a small, mobile and well-guarded target such as the head, practitioners should attack the opponent's body. Inevitably, there are exceptions to this strategy — kicking to the throat or under the armpit after controlling the arm, for example. Nevertheless, the front kick is designed to fold an opponent's body, not knock his head off.