How to Counter a Sucker Punch With Jujitsu! 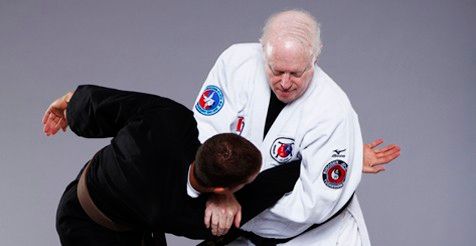 Ever get hit with a sucker punch? It isn't pleasant. Trust us. Better yet, trust 10th-degree black belt and jujitsu master George Kirby to show you how jujitsu can counter the sucker punch before impact and take down your opponent using vital targets and energy redirection! Jujitsu is known as the "gentle art" because it focuses on submitting your opponent with speed and ease without inflicting permanent damage. It's therefore well-suited for law enforcement, mixed martial arts and sparring applications. In this exclusive martial arts technique video, American Ju-Jitsu Association co-founder and budoshin jujitsu pioneer George Kirby shows you jujitsu techniques to counter a sucker punch! George Kirby outlines two counterattacks to stop the sucker punch and immobilize your opponent using vital targets, energy redirection and pressure points. The expanded edition of George Kirby's seminal jujitsu book, Jujitsu: Basic Techniques of the Gentle Art, is available now in our online store! Read more about jujitsu master George Kirby below the video!

Long before the Brazilian jiu-jitsu revolution swept the United States, George Kirby began studying the gentle art to help deal with the stress of grad school. Little did he know that his tutelage under sensei Jack "Sanzo" Seki was the beginning of a martial arts journey that would shape America's understanding of jujitsu for decades to come.

By 1968, Seki could sense George Kirby's potential as an instructor and told him and fellow student Bill Fromm about an opening at a local YMCA in Burbank, California. When Kirby pointed out that as brown belts they were too inexperienced to teach, Seki responded, "Now you're both black belts. Act like it." And so began the teaching career of one of traditional jujitsu's most respected and beloved masters.

A year later, George Kirby followed another one of Seki's suggestions and collaborated with Bill Fromm to form the American Ju-Jitsu Association, which has grown into a governing body renowned for bringing together jujitsu practitioners from around the world. He's also the founder and chairman of the Budoshin Ju-Jitsu Dojo Inc., a nonprofit educational foundation, and the Budoshin Ju-Jitsu Yudanshakai, a research and educational foundation.

In 1996, George Kirby launched a new jujitsu program for the city of Santa Clarita, California, where he continues to share what he's learned. Along the way, he perfected his craft in the public-school system, where he taught jujitsu and social studies for nearly four decades.

A prolific writer, George Kirby has penned a half-dozen jujitsu books, and his self-defense essays have appeared in numerous publications, including Black Belt.

In 2000 Kirby reached the pinnacle of his profession when he was promoted to judan (10th-degree black belt).

In recognition of his 40 years of teaching, Black Belt proudly inducted him into its Hall of Fame as their 2007 Instructor of the Year.

Judo at the 2020 Olympics is now winding down. Kudos to NBC for their excellent coverage. The United States had four players who made the cut.