How the Wooden Dummy Can Enhance Your Wing Chun Training 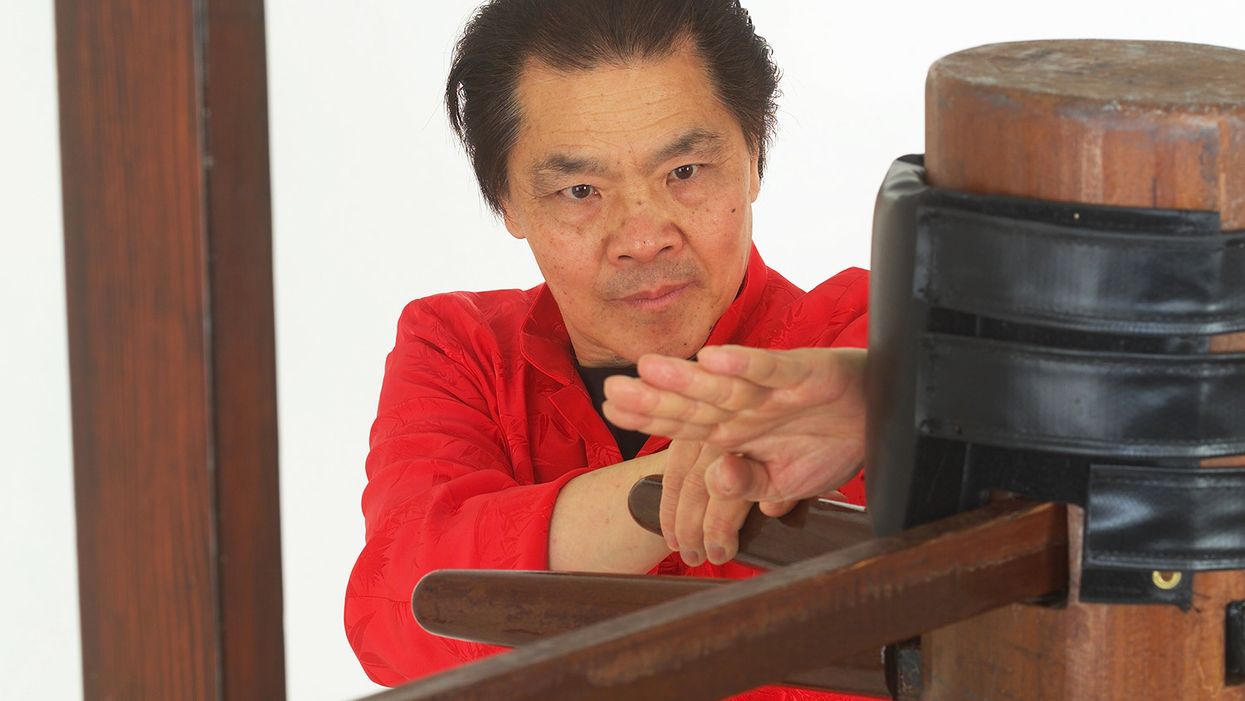 Improve your reflexes and step up your wing chun training with sifu Eric Oram and his master, William Cheung, as they demonstrate techniques to safely train with these ancient man-made stand-in warriors!

The gist of that old Chinese saying is obvious: The key to reaching the highest levels of any martial art is practice. Only by executing thousands of repetitions of your style's blocks, kicks and strikes will you be able to use your strategies and techniques in a natural and spontaneous way. Without that kind of preparation, in a fight you'll be forced to think about what you should do next when you ought to be doing it.

Traditional wing chun kung fu instructors address the need for practice by emphasizing to their students the importance of developing their reflexes. They stipulate, however, that you cannot rely on just any set of repeated movements to hone your ability to defend yourself. To ensure that you respond with optimal timing, balance and accuracy, you need to learn the lessons of the wooden dummy and integrate it into your wing chun training.

"There was a corridor that consisted of 108 wooden dummies representing 108 different attacking techniques," says William Cheung, a wing chun training expert and Black Belt Hall of Fame member. "The monks would move down the hall and practice their defenses and counterattacks on them."

After the Manchus razed the temple three centuries ago, one of the few surviving masters, a nun named Ng Mui, constructed a training device based on the principles of those dummies. "The positioning of the three arms and one leg of the wooden dummy was designed for 108 specific techniques parallel to the 108 techniques performed on the original dummies," William Cheung says.

In the old days, dummies were built using a large central trunk — sometimes as long as 9 feet — with a tapered bottom, he continues. “A hole would be dug in the ground, and the dummy would be buried about 3 feet or 4 feet deep with gravel packed around it," William Cheung explains. “The gravel would give way slightly when the wooden dummy was struck in order to soften the practitioner's contact point."

In traditional Shaolin kung fu, hard contact with a training dummy was used to condition the practitioner's arms in preparation for combat. Although some martial artists still aim for that goal, wing chun training does not focus on making direct contact with the device's wooden appendages. Instead, it uses the dummy to instill the ability to deflect or release an opponent's force. This principle is particularly important for people who must fend off a larger or stronger assailant or who simply wish to employ a more efficient and fluid method of defense.

Reap the Benefits in Your Wing Chun Training

Wooden-dummy workouts help you develop all the attributes needed to actualize wing chun's avoid-using-force-against-force principle: correct angle (of deflection), balance, accuracy, timing, mobility, positioning, speed, flow and power. But the training also endows you with numerous other skills and abilities.

Perhaps the most obvious is toughness. “Because wing chun uses the palms and forearms to block kicks — for example, the rolling block and the cross-arm block — it's necessary to toughen these weapons, and that's what wooden-dummy training does," William Cheung says.

Even though the dummy is an inanimate object, it can still help you polish your visual and contact reflexes during wing chun training. It does so by teaching you how to execute blocks and strikes in concert with each other, thus making them almost simultaneous parry-and-counter combinations. Just before you execute your counterstrike, there's a moment of contact when your parry deflects the incoming blow — or the arm of the wooden dummy that represents the limb of the assailant. This contact is your cue to unleash your strike. To an observer, however, your full-speed block and strike appear to arrive simultaneously.

Over time, making contact with the dummy becomes your trigger to launch a counterattack. The result is the development of your contact reflexes, which constitute an essential element of real-world combat proficiency.

Using the wooden dummy in your wing chun training also builds your visual reflexes. It requires a little more imagination and focus than does the sharpening of your contact reflexes, however, for you must pretend not to know what comes next in the form you're doing. By allowing yourself to be surprised by the next strike, you force your eyes to visually lock onto your wooden opponent before following up.

Because wooden dummies are usually made of teak, it's essential to practice all your offensive and defensive moves slowly and softly at first to minimize the impacts your body is forced to absorb. Then, as your accuracy and technique improve, you can put more energy and intention into it.

“In wooden-dummy training, the blocking areas of the arms are the palms and the inside and outside of the forearms," wing chun training master William Cheung says. “With the lower extremities, it's the outside and inside of the legs just below the knees."

Whichever body part you use to make contact, care must be taken to minimize the impact between your body and the wooden dummy — especially your bones and pressure points.

“When striking with the hands, your primary weapons are the heel of the palm, the side of the palm, the knuckles and the phoenix knuckles," William Cheung explains. "With the feet, the ball of the foot, the side of the foot and the heel are used. If the wooden dummy is adequately padded, the elbows and knees can be trained, as well. However, without proper padding, serious injury to the arms and legs may result."

Always remember that the deflection of the incoming force is your goal. You are not out to meet an opposing force head-on. According to William Cheung, if you take pains to implement that principle before you try to gradually build your speed and power, you'll heighten your ability to deflect while reducing the risk of injury.

“Beginners can benefit from the wooden dummy without unnecessary risk of injury as long as they are patient and cautious during the early stages of their training," William Cheung says. “The key is to make light contact until the body is sufficiently conditioned."

The ultimate goal of wooden-dummy training is the establishment of a good basic skill set you can tap into when you train with a live partner. That will enable you to respond with the right movements and principles without undue thought. Then, no matter where your martial arts journey may lead, you'll be as prepared as you can be to handle any contingency that emerges — with an old wooden friend as your guide.

About the Author: Eric Oram is a freelance writer and senior disciple of William Cheung. He has taught wing chun for two decades. When he is not engaged in wing chun training, teaching or writing, he works as an actor and fight choreographer. He is the author of Modern Wing Chun Kung Fu: A Guide to Practical Combat and Self-Defense.

Black Belt Team
one championship
a.espncdn.com
Victoria "The Prodigy" Lee has set ONE Championship on fire in 2021 with two successful mixed martial arts victories inside the Circle. Now, the teenage sensation returns for another stiff test when she meets Victoria Souza at ONE: Revolution on Friday, September 24.
Keep Reading Show less

The Triller Fight Club pay-per-view platform has gained immense popularity recently by hosting pop culture-fueled boxing matches such as Logan Paul vs Floyd Mayweather and Jake Paul vs Tyron Woodley. They were back in action on Saturday night with a card that featured multiple MMA legends as Vitor Belfort challenged Evander Holyfield and Anderson Silva went toe-to-toe with Tito Ortiz in a boxing ring.

The first of these two bouts was the showdown between former UFC champions Ortiz and Silva. Ortiz came out swinging with a series of punches, but they were simply too slow for the elusive Silva. Silva ducked under a series of punches, connected with a hard right hand, and followed with the left to send Ortiz to the canvas. In just 81 seconds, Silva knocked out his fellow 46-year-old combatant and improved his boxing record to 3-1. Before Ortiz, Silva also defeated Julio Cesar Chavez Jr. via split decision back in June.